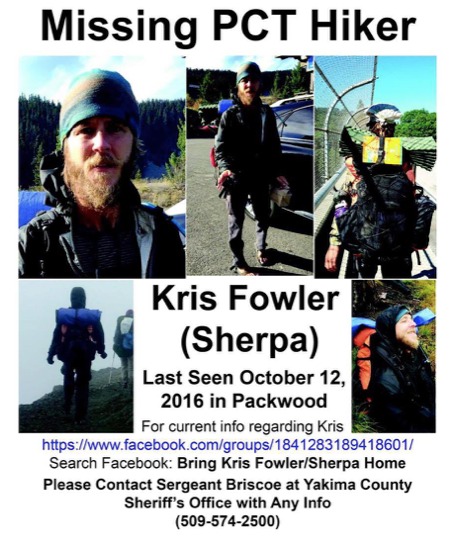 Despite extensive air and ground searches, a hiker who had completed most of the 2,659 mile Pacific Crest Trail remains missing as winter weather increasingly covers the Cascades with snow.

Kris Fowler, a 34-year-old from Ohio, was the last northbound hiker of the season, nearing his goal of completing the hike all the way from the Mexican border to its end at the Canadian border in a single year, according to Sgt. Randy Briscoe of the Yakima County Sheriff’s Office.

Eight Washington counties as well as Air National Guard units have joined in the search for Fowler, said Briscoe, who coordinates the Yakima County Sheriff Search and Rescue work.

Fowler was seen at White Pass on Oct. 12, when a woman dropped him off at a Cracker Barrel store after giving a ride. He likely returned to the trail, because, Briscoe said, two hunters believe they saw him near Blowout Mountain on Oct. 22.

Sally Guyton Fowler, the hiker's stepmother, said, “He texted two friends [on Oct. 12] as well and [White Pass] is the last place his phone pinged, and he has not used his debit card since that day either.” Authorities are getting a search warrant to keep track of any financial activity with his bank in Ohio, said Sgt. Briscoe, as well as making checks with his phone carrier for any use of his cell.

Search and rescue officials from counties alone the route got together recently to review all the possibilities, and they remain committed to continuing the search during the winter. Volunteers with snowmobiles in Yakima County are organizing to look for Fowler, Briscoe said Wednesday.

Officials and volunteers continue to distribute flyers about Fowler with updated information.

Fowler, whose trail name is Sherpa, had been hiking with his girlfriend, but she ended up feeling sick and left the trail to go home shortly before he got to White Pass. He chose to continue his hike but was not heard from or seen until six days after that.

Briscoe said recently, “We have no idea where he is. Obviously, if we had an idea of where he was, we could saturate it with all the resources possible, but the Pacific Crest Trail is a little over 300 miles from White Pass so what we know is that he walked out of the Cracker Barrel restaurant saying that he was going to get on the trail, but nobody saw him on it.” But the account of a meeting at Blowout Mountain appears to hold up, too, he said.

Briscoe said that teams from other counties and Yakima have looked all along the main trail and the major side trails that a hiker was most likely to take. "We have hiked the entire section of 52 miles of the Crest trail in Yakima County with mountain rescue folks.”

“This is of course very difficult for Kris' family as well as his many close friends,” Fowler's stepmother said. She added, "Everyone loves Kris. He's just a good guy. It is very difficult but we have to focus on finding Kris.” She said there have been many offers of help from fellow fraternity members at Wright State University, where he graduated.

Briscoe said, “The biggest concern this time of the year of course is the snow. … There’s some steep portions, they call it the cat walk. It’s in Okanogan County, and it’s actually that the trail has been carved into the side of the hill into rock and it’s extremely narrow.”

Designed as a national scenic trail, the Pacific Crest Trail covers pristine mountainous terrain and avoids civilization, making it hard to find people if they get lost. According to the PCT Association (PCTA) website, “Hundreds of thousands of people use the trail every year. No one keeps track of where they are. If you’re looking for a loved one, you can try asking on social media.”

Fowler’s stepmother has been using the Facebook page she set up to help find him and has been contacting fellow hikers who were on the trail with Fowler. “They said [Fowler] was a strong hiker, a smart hiker, and a fast hiker," she said, "and that he’d often get off the trail to shoot photos.”

Briscoe said Fowler was apparently able to deal with the first snows of the season. He said searchers are determined to continue their work until they find him.