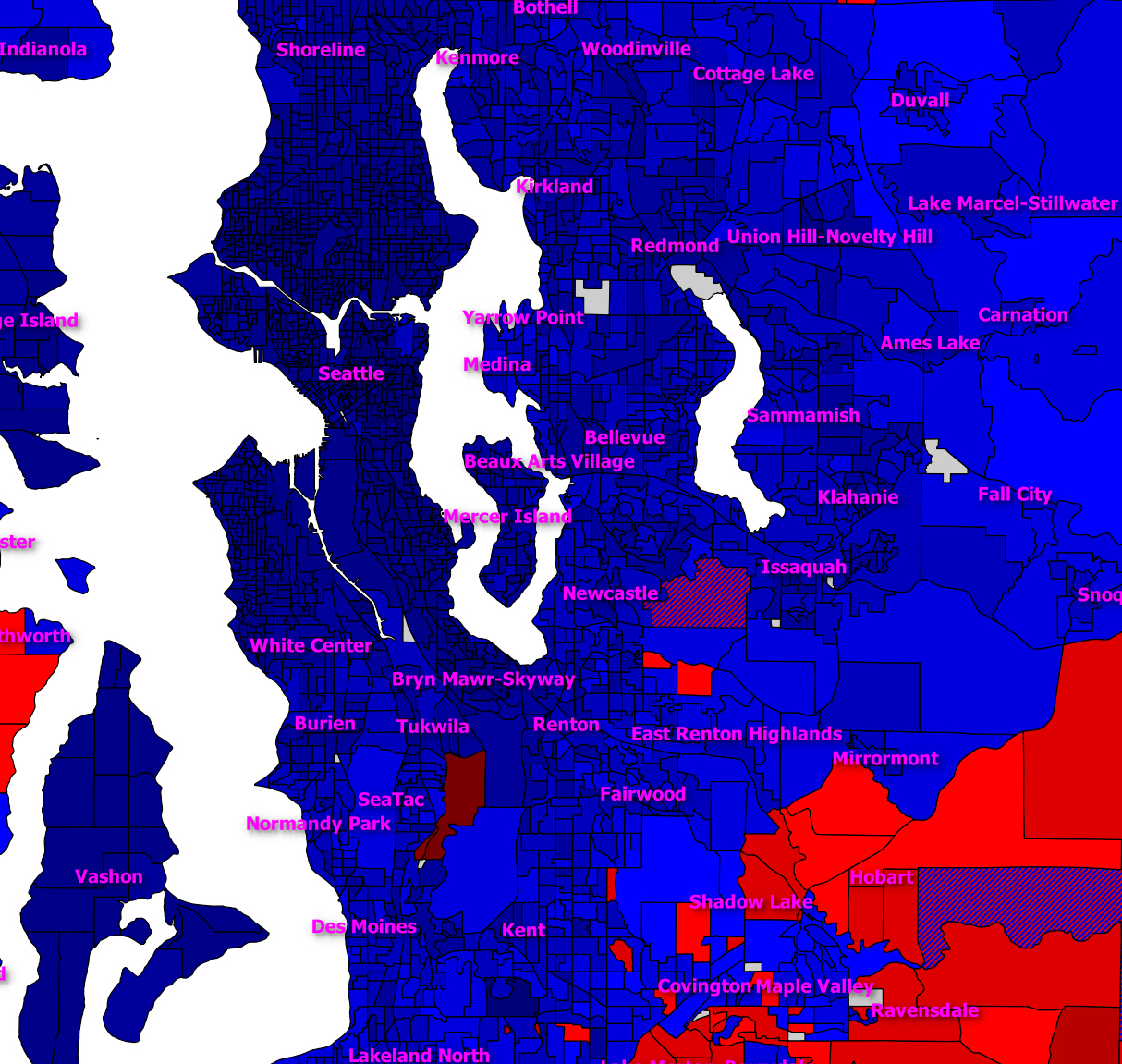 Puget Sound went for Hillary Clinton by larger margins than Obama, while Trump made gains in nearly every other region of the state.

Last week, Donald Trump pulled out an unlikely win. Although Trump will likely lose the popular vote by a record margin for a winning candidate, this mixed result shouldn’t diminish from the significance of his victory. This year’s election saw the most electoral realignment of any since 2000. Love or hate the election outcome, it tells us some fascinating things about both America and Washington state today.

Buoyed by record-setting performance among whites without a college degree, Trump made big-league improvements in areas with lots of these sorts of voters, from the Dakotas and Midwest to Maine. His strength among these voters, still a majority of the white electorate, even allowed him to improve vis-à-vis Mitt Romney’s margin in relatively educated states like Colorado and Minnesota.

Here’s a bit of a surprise: Washington wasn’t among them. All told, Trump is expected to improve over Romney’s margins in 30 of Washington’s 39 counties. But the urban Puget Sound — where Clinton improved over Obama’s margins — will simply wipe those gains out.

Areas like King County’s Eastside have become so Democratic-leaning that Clinton had fewer educated Republican-leaners to pick up than in, say, suburban Atlanta. On the other hand, while non-college whites in Georgia are overwhelmingly Republican, there are tons of Democratic voters in Washington who belong to this demographic. Just think Snohomish County, South King County, and Pierce County – and you can imagine where Trump might have made big gains.

So…what happened? Let’s start by taking a look at the Presidential race in the Puget Sound.

The first thing to notice is that there is virtually no red in urban King County. That is not normal. King County is very Democratic, but even these days, Republicans reliably win a few precincts in upscale areas like Clyde Hill, Hunts Point, and Sammamish. But this year, they were shut out – and the change from 2012 was sharp. Below is the “swing” between the 2012 and 2016 results, measured by the change in margin between the percentage for the Democratic and Republican candidates.

These numbers are staggering. While Obama won Mercer Island by a strong 62.3 percent to 35.6 percent margin in 2012, Clinton defeated Trump 74.4 percent to 21.5 percent. In many precincts, Trump’s showing was barely half of Romney’s.

In addition to poor showings among the affluent, Trump suffered by stagnation in working-class parts of the Puget Sound. Here’s a sampling of cities that, demographically, should have been even more conducive to a swing toward Trump than the national average. They all have personal incomes and college education rates below national average, and a proportion of working-class white Democrats well above national average.

These results are merely mixed. That’s not good for Trump. Compare this set of cities, which are lower-income and less-educated, to Minnesota, a state slightly more educated and high-income than Washington. The swing in Minnesota was 6.2 percent toward the Republicans. Although they swung Trump, not even Bremerton and Everett did so by that much.

Trump underperformed his demographic potential in the Puget Sound.

I have already seen many dismiss this as predictable, because Trump is a “bad fit for the Pacific Northwest.” But Trump did manage some massive swings in more rural blue-collar Washington counties: Grays Harbor County (Hoquiam-Aberdeen) swung +20.7 percent his way, with Cowlitz (Kelso-Longview) and Mason (Shelton) just behind at +17.1 percent and +13.0 percent, respectively. Trump also did well in far-out exurbs like Bonney Lake and Marysville, and nearly all of rural Washington.

Here’s the likelier explanation for Trump’s overall underperformance: the Puget Sound is doing pretty well economically right now. A poll earlier this year by Strategies360 showed that King County residents say, by an over two-to-one margin, that they’re happy with the direction of Washington State. Compare that to recent national polls that show Americans think the country is on the wrong track by the same margin.

Of course, it’s also easy to see how Trump’s pessimism on the economy, trade, and immigration might not resonate strongly in the Puget Sound. Like many other urban areas in the country with strong economies, the Puget Sound seems to have avoided the exodus of blue-collar whites to Trump.

Finally, a note on down ticket races. Earlier this year, I argued that data suggested that Trump would likely have a toxic effect on down ticket Republicans. My argument was twofold. First, I argued that Trump would likely bleed votes in several more affluent suburban districts, especially on the Eastside. Second, I suggested that – especially in a negative, polarized environment with less ticket-splitting – Trump might hurt the many down ballot Republicans seeking election in heavily Democratic districts.

Nearly all national data suggests that this election saw the lowest rate of ticket-splitting ever. In light of that finding, it’s quite possible that Sen. Steve Litzow (R-Mercer Island) would have survived, had his district not veered from 59 percent for Obama to 70 percent for Clinton. Similarly, a double-digit swing toward Clinton in District 5 likely helped incumbent Sen. Mark Mullet (D-Issaquah) barely fend off a challenge from Rep. Chad Magendanz. Finally, in District 30, Democrats are poised to pick up two State House seats. That district voted Clinton by over 20 points; it’s hard to imagine Trump helped there, either.

It’s absolutely true that local Republicans continue to have great success winning crossover votes in Democratic districts. But, this year, it does not appear Trump was anything but a burden.

In fact, it says a lot that Republicans have a shot at only two pick-ups. The first is a non-competitive open seat in the strongly Republican-leaning 31st District. The other is in the blue-collar and traditionally Democratic 19th District, spanning from Grays Harbor County to Kelso-Longview.

As you might remember, that area was home to Trump’s biggest statewide gains. This too suggests that Trump’s presence on the ballot probably had down ticket implications.

Unfortunately for Republicans statewide, who might otherwise have had a good year, that was bad news.

Note: All numbers quoted above reflect latest data as of November 14. Many ballots remain to be counted in Washington, and results will not be final until certified on November 29.