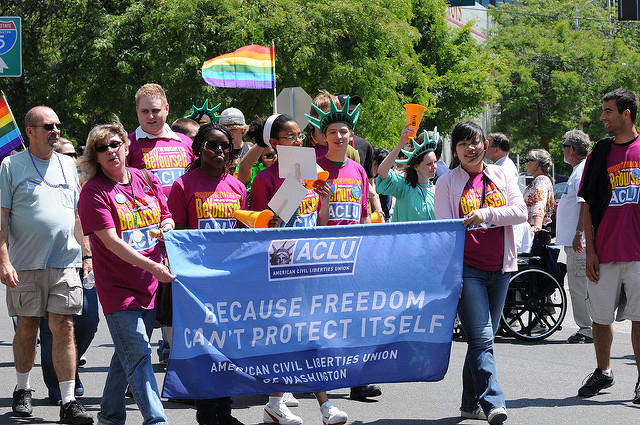 At the 2009 Gay Pride march in Seattle

For all the hand wringing about President-elect Donald Trump, his election has had one silver lining for some of his opponents: support.

“We’ve been deluged with people offering to volunteer, become members, and/or donate in the few days since the election,” said Doug Honig with the local chapter of the ACLU.

That’s following a trend in ACLU's national offices and, apparently, for a number of advocacy groups, including in Seattle, and even media organizations.

In a blast email, ACLU Executive Director Anthony Romero wrote, “In just five days our Facebook followers have increased by 25 percent to nearly one million people; 400,000 people viewed our open letter to President-elect Trump on our website; and 150,000 new people have joined our e-mail list. We have also heard from thousands of people offering to volunteer their time and services and have received roughly 120,000 donations, totaling more than $7.2 million. This is the greatest outpouring of support for the ACLU in our nearly 100-year history, greater than the days after 9/11.”

That makes logical sense: The ACLU recently took out a full-page ad in the New York Times to publish a letter to Donald Trump, promising to fight him in court if he moves forward with his campaign promises to deport 11 million immigrants, ban Muslims from entering the country, restrict abortion rights, reinstitute torture and change the country’s libel laws.

Jorge Baron with the Northwest Immigrant Rights Project said in an email, “The answer is yes, we have seen an increase in support from the community starting on Wednesday. That day, we actually had people walk into our office to make a donation, which we felt was particularly inspiring and we've had a significant number of online donations. I don't know that I would describe it as a ‘deluge’ but it's certainly been a welcome response from the community.”

“One thing that was heartening is the day after election, even before we did anything, there was a handful of donations,” said Chris Megargee with Casa Latina. As they made a push, the response was even greater. A Facebook post asking for support was the most liked and shared post Casa Latina has ever had.

It comes at an uncertain time for many of these organizations which, like just about everybody in the country, don’t know what a President Trump will actually do. As they wait, Casa Latina has been holding group discussions with staff and clients to discuss immigration status, civil rights and how to deal with harassment. One thing for sure, says Megargee, “It’s been jarring to hear how fearful people are.”

For Casa Latina, the direct services they offer will remain the same; regardless of who’s president, immigrants need help finding work. But in its other capacity, as an advocacy organization, the urgency has spiked, says Megargee. In his words, everything’s about to get “amped up” for at least the next four years.