How animals have shaped Seattle. And still do. 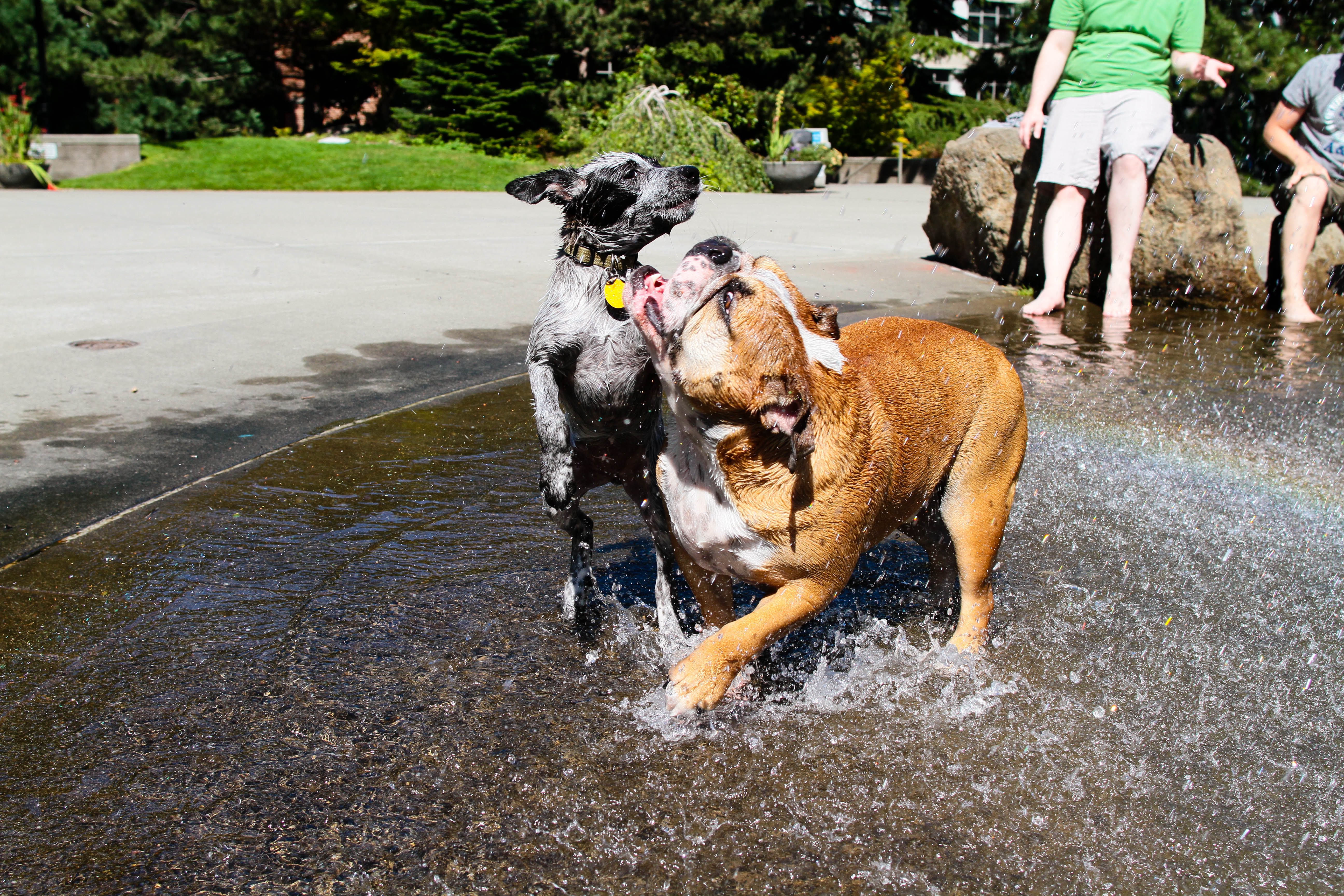 Animals have played enormous roles in shaping of modern cities, though few of us stop to think about it. Take Boston, which was developed around a grassy commons that was a centuries old cow pasture. Bean Town’s tangled road system is often jokingly blamed on the fact it follows the paths of meandering 17th-century cows. The Great Chicago Fire of 1871 was attributed to Mrs. O’Leary’s cow, which supposedly kicked over a lantern one night. That probably didn’t happen, but the fire did start near her family barn. And the Great Seattle Fire of 1889 also had an animal component: The glue pot that boiled over and set the city ablaze was full of adhesive made from animals parts.

But the role of animals goes beyond causing transportation chaos and grid-clearing disasters. Historian Frederick L. Brown has written a fascinating account of animals—particularly domesticated animals—in the creation of our city. The City is More Than Human: An Animal History of Seattle sounds like it might be a marginal academic history of obscure forces, but in fact Brown makes a compelling case that animals have been central to shaping our physical, economic, and sociological landscapes.

As his book from the University of Washington Press shows, animals have been a driving force, a wild element and potent class symbols. They continue to be catalysts for urban conflict too, whether it’s off-leash area controversies, use of animals in research, or ongoing concerns about the negative impacts of dog and cat feces in Puget Sound run-off. Animals continue to be a factor in shaping civic culture.

In the beginning, the pioneers from the Eastern parts of the country had to be taught subsistence by native peoples. The Denny Party arrived one miserable wet winter day and were partly sustained by game, waterfowl and fish supplied by the welcoming Duwamish people. But the colonial ambitions of our founders went beyond local foraging. Spanish cattle from California were already in the region grazing on Puget Sound’s prairies, thanks to their import by Hudson’s Bay Company traders. The Denny group and others quickly brought in American dairy cows. They represented civilization, a source of milk, butter and cheese that supplied the diets that Euro-Americans were used to. They aided the conversion of the wilderness to an agrarian economy en route to building a modern city and they remained a fixture in Seattle into the 20th century.

The wandering cow could take advantage of land being cleared, though not yet settled, for city building, and outside the nascent Seattle village in what we call Pioneer Square today, belled-cattle could frolic in the newly opened spaces that became a kind of public commons. Oxen were used to haul logs, horses too. In early Seattle, these beasts were the major laborers that kept us fed and advanced development and industry. Chickens, which are now making a comeback in the city, were important too — easy to keep, producing precious eggs. “Domesticated animals were not an afterthought or a convenience, they were essential,” Brown writes. Local food wasn’t a trendy luxury back then.

Livestock were a means to an end. Horses, for example, were crucial for linking farms to the growing city. They pulled trolleys, milk wagons, ambulances and fire engines. They were the drones of the pre-Amazon era, whisking goods from The Bon and Frederick’s department stores to the swells on First Hill. The early streets were a mire of mud and horse crap, but the brute strength of real horsepower helped conquer Seattle notorious hills, which in the early 1900s were considered too big an obstacle ever to be surmounted by the brand new thing called a horseless carriage. Horses and their drivers ruled our streets from the mid-19th century until finally made irrelevant by motorized vehicles, but that didn’t fully happen until the 1930s. Brown calls Seattle’s horses “the indispensible engines of urban growth.”

Our traffic laws originated out of ordinances passed to control the behavior and speed of wagon drivers. The early pioneers were obsessed with building wagon roads and pack trails to link Seattle with communities and land not easily reached by canoe or schooner. Those new roads allowed the city to extend its boundaries and economic influence.

The removal of helpful domesticated animals of the city was a bellwether of social change. In the 1856 “Battle of Seattle” in which Indians attacked the settlement, Brown says people were upset by the death of one settler, but also traumatized that the attackers ran off the community’s livestock. As the city grew, people fenced in the common grazing areas and objected to wandering cattle as unhealthy, unsafe and inappropriate to the dignity of emerging middle-class neighborhoods.

Brown points out that the post-World War I era housing covenants that barred African-American, Asian and Jewish people from many residential areas also banned farm animals. Critters that had been central to sustaining urban life in the first 70 years were now seen as reflecting the primitive life ways of a lower class. In the early part of the century, for example, local women milked cows and supplied their neighborhoods with hyper-local dairy products. But with the extension of modern markets these sustainable ways of self-reliant living were systematically eliminated by law. No cows in my backyard!

In the early 1900s during the Progressive movement’s reforms, women took up the cause of the humane treatment of laboring animals, such as horses, many of which were terribly neglected and abused by their owners. The Humane Society was launched and animal welfare became a thing. So did child welfare, by the way. The Rev. Mark Matthews of the First Presbyterian Church, a reformer, noted in 1907 “women are instinctively the friends of dumb animals and little children.” Many of those who pushed taking care of miserable livestock extended their sympathies to the growing problem of orphans, neglected children and the urban poor.

Today, there might be arguments about folks who want to keep chickens (it's legal) or what constitutes a legitimate pet — like mini pigs or pit bulls — but we’ve also embraced pets as a new class of citizen. Pets have their political advocates and opponents: Off-leash areas for dogs have evoked repeated political fights in Seattle. And the city takes the presence of dogs and their value to residents seriously in its planning: The parks superintendent is scheduled to finalize a People, Dogs and Parks Strategic Plan early next year.

Animal rights and opposition to animal experimentation, for example at the University of Washington, are hot-button issues with strong support. An those experimental animals — they include monkeys, dogs, pigs, rats and mice, are part of medical and biotech research, and in that sense are helping shape the 21st century city. Wild animals, too, are issues for city policy, whether we’re trying to restore salmon runs, gassing Canada geese due to “overpopulation,” or trying to control rats for public health.

Some animals are recovering their status as useful helpmates. Landlords with no-pets policies must accommodate service and companion animals, which seem to be proliferating. Animals now have a recognized therapeutic value.

Many people regard pets as family members. By the 1930s, it was considered a normal part of childhood for kids to have a dog to aid with moral development. In more recent decades, adults with pets love to pamper them. There are urban dog spas, pet bakeries, and shops that sell medical marijuana for pets. We treasure our canines and felines, though are reluctant to acknowledge their downsides, such as the disease and parasites they spread to wild animals like otters and harbor seals through their poop.

Brown tells us that census figures say that 30 percent of Seattle households have cats, 25 percent have dogs, while only 20 percent have human children. “The city is more than human” is a fact that Frederick Brown’s history brings fascinatingly to light. He helps us remember our animal partners in this urban enterprise.