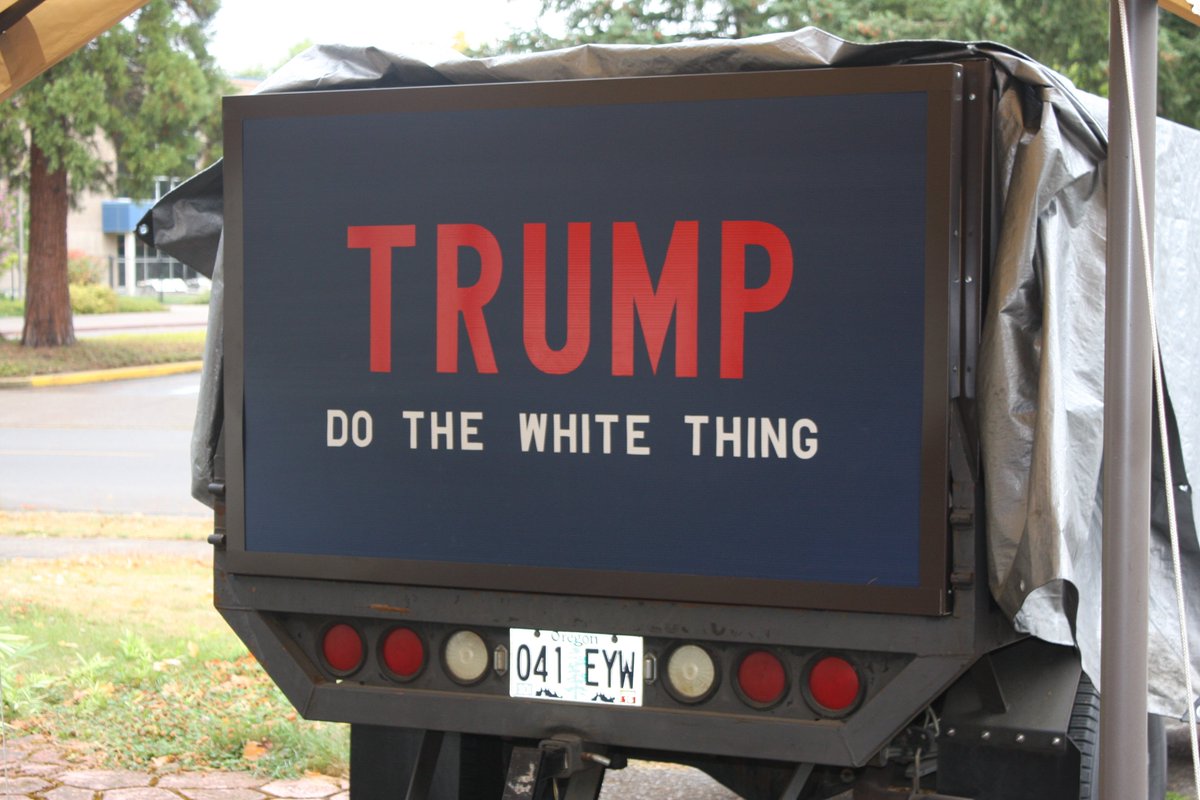 A truck being driven on highways by Jimmy Marr, a white supremacist in Oregon. It reads, "Trump: Do the White Thing."

A Toyota Tacoma sporting a large swastika and a “Jew Lies Matter” slogan has been zipping up and down I-5 this fall. It’s been getting a lot of attention on social media. The vehicle belongs to a bagpiping, holocaust-denying, anti-Semitic white supremacist from Oregon named Jimmy Marr. According to the Oregonian, his truck has been spotted from Eugene to Seattle. A Facebook friend of mine saw it at the Tully’s on Mercer Island.

Right after Labor Day, I was in Olympia speaking to a combined meeting of the Kiwanis and Rotary clubs about my Crosscut series on Nazis in the Northwest before World War II—not the uplifting story of “The Boys in the Boat” but the more sobering tale of the “Fascists in the Forest.” The same day as I was traveling south on I-5, Marr’s truck was photographed heading north near Olympia. My talk seemed more relevant than ever.

In the Q&A after my presentation, someone asked if there wasn’t a hereditary component to regional fascism or far-right ideology. I said that I thought so, and so did some observers in the 1930s. The center of the pre-war Silver Shirt fascist movement in Washington was in Centralia-Chehalis area, where the Centralia Massacre included the lynching and purported castration of a labor union member.

Politics, left or right, can stick around a place, and it can be passed down. Geography can play a role. For survivalists, “preppers” and separatists, the Northwest offers terrain—woods, hills, wilderness—that seem defensible when civilization goes to hell. Some call the region “the American redoubt.”

An illuminating book on the family factor is “Hate or Be Hated” by J.G. Daniel (2016), a self-published memoir about growing up in rural Pierce County with a father who was a rabid member of the John Birch Society. The subtitle of the book is “How I Survived Right-Wing Extremism.” Daniel, who still lives in Washington but is estranged from his parents, offers a painful and perhaps cathartic account of being bred to hate by his paranoid, survivalist dad. He was literally steeped in far-right conspiracy theories and indoctrinated into the Bircher cult during the ‘70s and ‘80s.

The group, founded by Robert Welch and the father of the Tea Party-supporting Koch brothers, Fred Koch, was an anti-communist group in the late 1950s. The Birchers were progenitors of many post-war, right-wing conspiracies. Dwight Eisenhower was a communist, Richard Nixon was too, the Bushes part of the New World Order. You can tick down the ideological list: Immigrants are the enemy, gays are an abomination, the government is bad, the United Nations is evil, a Marxist lurks behind ever tree—and they are all out to get us.

Young Daniel was raised to believe such things, sometimes homeschooled, toughened for the expected invasion of the Soviets (see the 1984 movie, “Red Dawn” for the much-imagined and beloved scenario of a bunch of high school students holding off the invading Russian army) or FEMA’s black helicopters advancing the UN agenda. His father was an active chapter head of the Birchers. Daniel was sent to John Birch summer camp at Lake Wenatchee where the kids could absorb hate around the campfires.

The family was prepared for the apocalypse, and well-armed, their rural home packed with guns and ammo. His father, Daniel says, was an angry Vietnam vet who was disillusioned by the war, survived the slaughter of his platoon by being on leave at the time, and probably suffered from survivor’s guilt. He channeled his rage into far-right ideology and bullied his son into accepting his paranoid view of the world. His father limited the family’s exposure to popular culture, riddled as it was with corrupting messages. Daniel says he and his siblings were not allowed to watch the Mary Tyler Moore show because it featured a single, working woman.

Daniel writes, “I think the reason Dad believed everything he read or was told by the extreme right-wing media was because he wanted to feel intelligent without having to study or put in the work. Believing in conspiracy theories is a form of therapy for him—it justifies his existence on the losing side of society and it helps his ego.” Writing a memoir coming to terms with his father’s ideological madness has been therapy of a kind for Daniel.

There’s a larger warning in Daniel’s experience in the belly of the Bircher beast. While most folks think of the Birchers as your grandfather’s right-wing crackpots, their reach has been long and their ideas, once fired by the Cold War era 1950s and ‘60s, have reignited in the Barack Obama and Great Recession years.

Another memoir, “Wrapped in the Flag” by Claire Conner (2013) documents a young girl’s life with middle-class parents who were higher-ups in the Birch Society. She sees the election of 2008 as one where shifting “political discourse sounded eerily similar to that of 1958” when the JBS was founded. “The Kochs and their allies envision the same framework for American government that I heard from my father and his John Birch Society allies” she writes. “In 2008 when the economy tanked and Barack Obama emerged as the Democratic nominee for president, the radical right went on offense.” Obama’s re-election in 2012 took opposition to the next level.

The John Birch Society still exists—in fact, it is run from its headquarters in Wisconsin by a Seattle native who attended the University of Washington, Art Thompson. Daniel sees the group as the “invisible culprit” in spreading of far-right ideas and attitudes. Once-crackpot Bircher paranoia is now commonplace. Where they were once drummed out of the conservative movement by no less than William F. Buckley, they continued to influence and radicalize the far right, informed domestic terrorists like Timothy McVeigh, and worse, their ideas are now rampant in the political mainstream as embodied by the rhetoric of GOP presidential candidates Donald Trump, Ted Cruz, Ben Carson, and others.

The result is a political climate where all forms of far-right extremism are letting their freak flags fly. To prove the point the Oregonian reported that the back panel of Jimmy Marr’s swastika-adorned Toyota truck has been repainted. “Jew Lies Matter” has been replaced by a new slogan: “Trump: Do the White Thing.” While the John Birch Society insists it is not racist, others see a hate group that has a chance to make a comeback in “the Age of Trump.”