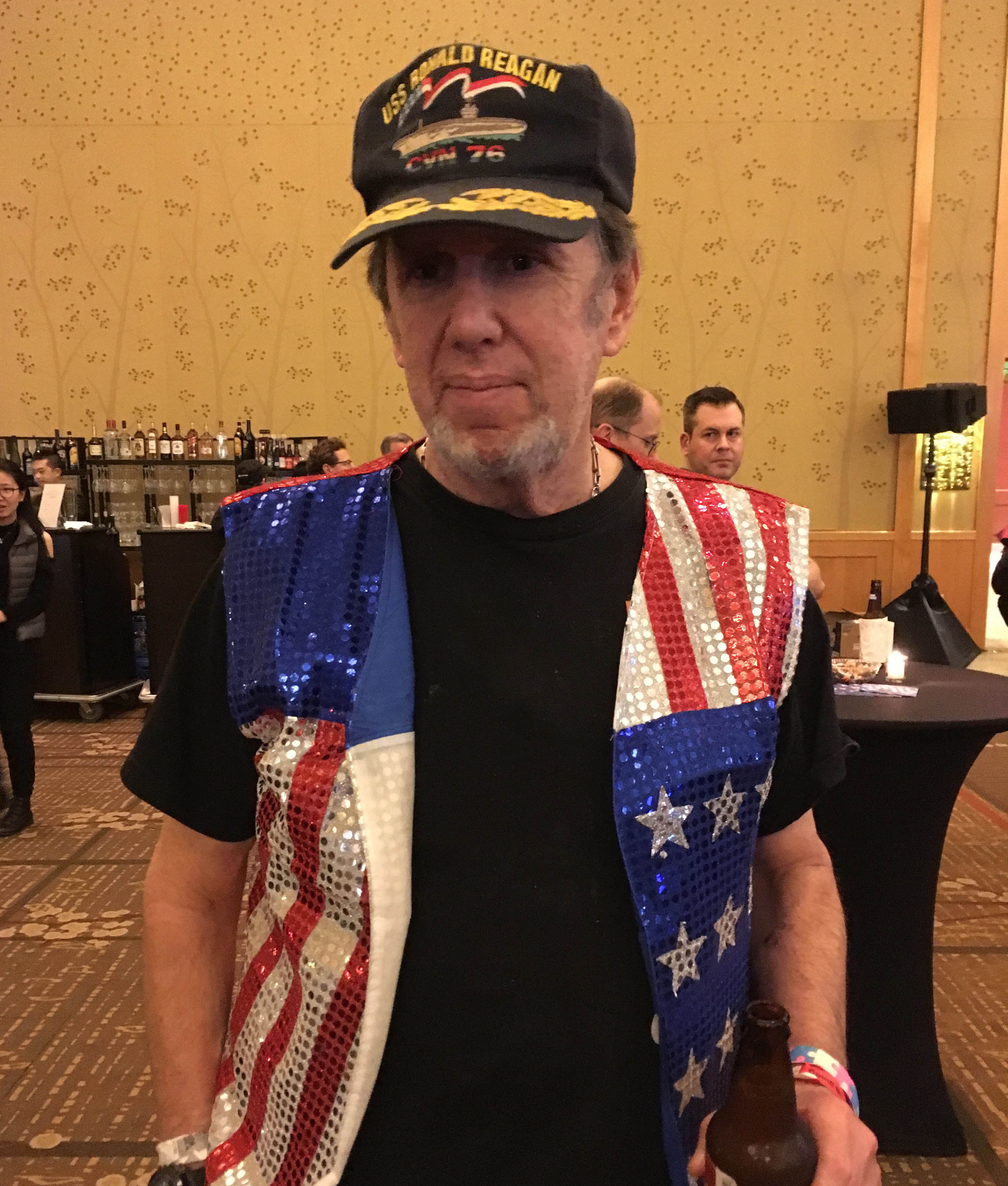 Susan Hutchison, state Republican Party chair, is all smiles on Election Night. The results of the presidential election have not yet been called, but in the ballroom of the Bellevue Hyatt, surrounded by her fellow party members, there is a lot of optimism. Donald Trump and Congressional Republicans are clearly having a good night.

"Definitely the electoral map has been scrambled a bit," she says. "We're just waiting for them to call any number of states" that could push Trump over the top.

"Then the country comes together! Isn't that how it works?" She smiles brightly.

Though the evening started off with notes of cautious optimism, by about 10:30 pm the mood is really, really high at the state Republicans’ Election Night party, with a hearty "TRUMP! TRUMP!" chant erupting regularly in the crowd. Fox News is on the big screens, and there are probably fewer pantsuits than usual, as that classic sartorial choice has suddenly become political. “Make America Great Again” hats and American flag accessories dot the crowd. Candidates trickle in and out with campaign signs and spouses in tow.

Wen, in a red Make American Great Again hat, says she bought her MAGA hat three days ago, “just for this party!” She’s been an independent, a Democrat, and a Republican in the past. But this year, she’s a Trump supporter.

Mike Brewer, a precinct committee officer and longshoreman from Seattle (he works “the same waterfront as Bill Bryant,” he says) is wearing a sequined American flag vest and “feeling fine” early in the night. “I think we’re gonna win.”

It’s not all good news. Republican gubernatorial candidate Bill Bryant is down 56 to 44 when the statewide ballot drops come in. He takes the stage, telling the crowd, "We are not exactly where we wanted to be right now. But we've been upstairs crunching the numbers, and we have more than 1 million votes left to count, and we think 2/3 of them are from outside King County."

The room cheers the news. Bryant notes that he's been at this point in an election before, and when reporters told him to just concede "so they could go home," he refused—and then won. So tonight, he's optimistic. "This is not over yet," he told the room. "Let's see what the sunrise brings."

Earlier in the night, Bryant would not say who received his vote for president. But an unabashed Trump supporter — Tim Eyman, the notorious initiative campaigner — is on hand here as well.

Eyman says he's most excited tonight about little things: Ballot Measure 97 in Oregon, a measure to add a tax on gross sales of larger corporations, which he says would have driven Oregon businesses to Washington, was defeated. "That's a canary in the coal mine," he says. "If voters in Oregon are saying no to higher taxes?"

He goes on to brag about "my advisory votes" — which allowed voters a chance to express displeasure toward tax increases — and jokes about King County's delayed ballot results. When the full results come in from King County, he says, "We're gonna find out that Dino Rossi won in 2008!"

But does the Republican Party have any plans for how the "coming together" part can happen, after this bitterly divisive election?

Hutchison says she thinks that "when people see some of the people [Trump] chooses to surround himself with, their fears will be assuaged," she says, listing Mike Pence, Rudy Giuliani, and Ben Carson as examples.

"Inside the Trump organization," Hutchison adds, "there are some very powerful women... He's known for promoting women." So for her part, she says cheerfully, "I'm looking forward to seeing women in his administration."

The night's early caution turns to glee as the results become clear, but still, at the party for this political revolution, people stay mostly calm. They're talking a lot more about taxes and "strength" than about walls and immigrants and sexual assault.

The paper cutout of smiling, thumbs-upping Donald Trump gets brought onstage so that anyone at the podium is standing right beside him; Hutchison poses for pictures with her arm around him.

Toward the end, the crowd fills with more of those red hats, as if people were unsure about them before, saving them until it looked like Trump would actually win.

Now they're wearing them proudly.

Correction: This article originally stated King County voters officially caused Tim Eyman's advisory votes to be rejected, rather than the state at large. We regret the error.