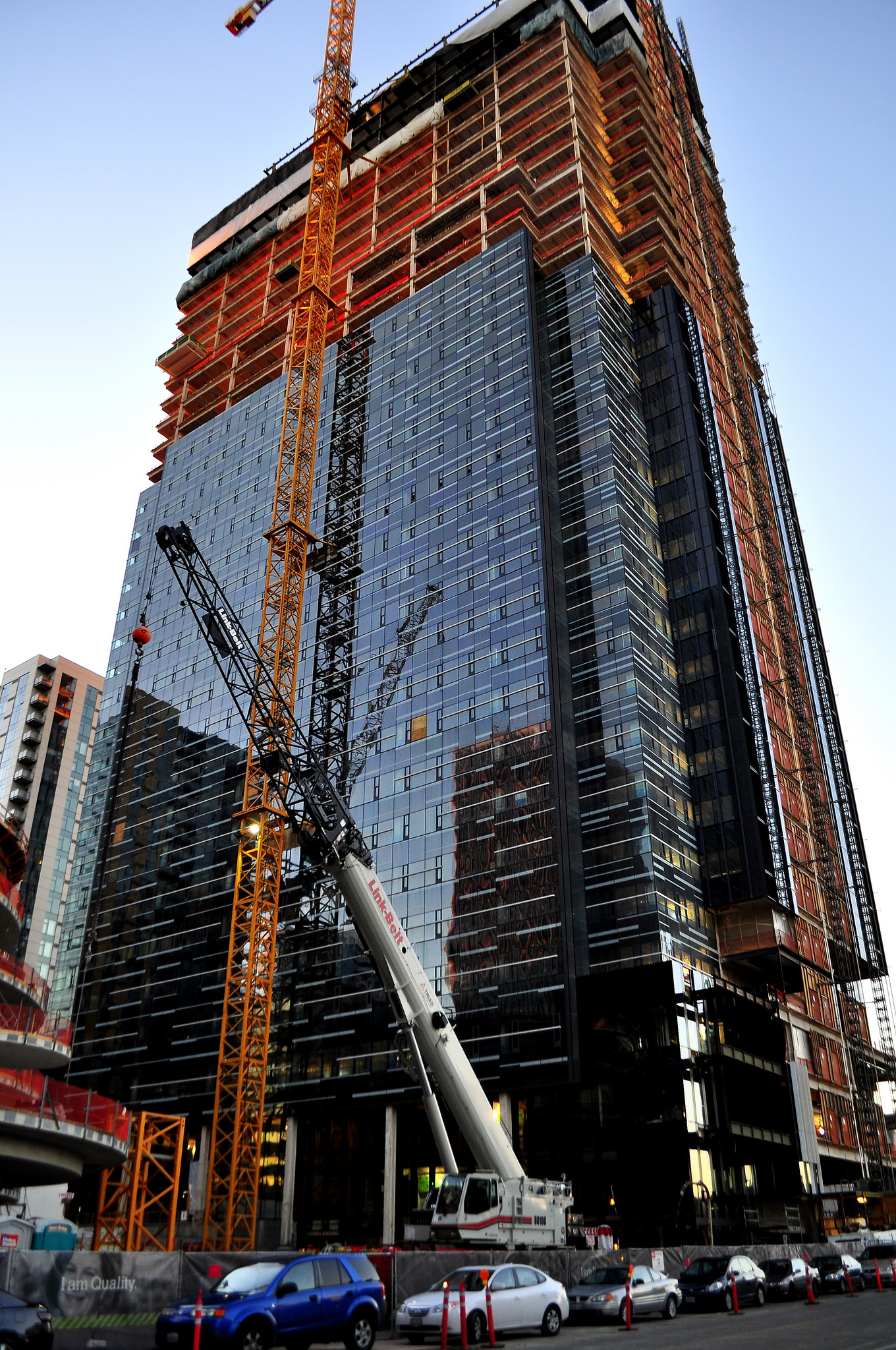 An Amazon building under construction earlier this year: Seattle's tech boom could be poised for takeoff.

Think we are in a tech boom right now? Just wait. That boom could get a lot louder as the big San Francisco Bay Area firms grapple with their region’s own unsustainable growth pattern.

Since the 1970s, the Bay area has defied economic gravity, continuing to prosper and grow in spite of ridiculously high housing prices. With development already restricted by geography, state and local governments in California have made life difficult for anyone who wants to build housing in the coastal areas. Prices have responded as one might expect, making the Bay Area the least affordable part of the country.

Yet, the tech boom continues, powered by what economists refer to as agglomeration economics: The more of an activity taking place in a region, the more productive everyone doing that activity will be. For established firms and startups alike, the Bay Area offers unparalleled access to talent and specialized services. And, as Alfred Marshall famously said in another context, knowledge of the industry is “in the air.” These advantages far outweigh the inconveniences of housing and transportation woes.

Now, enter “Stein’s Law.” Economist Herbert Stein wryly observed that “that which is unsustainable will stop.” Some might have expected the unsustainable growth in the Bay Area to have ceased years ago, and even now, predicting its slowing is risky: In 2015, $24 billion in venture capital landed in the Bay Area, while only $1.5 billion came to the Northwest.

But as tech growth has crept up the Peninsula from Silicon Valley, engulfing San Francisco itself, the rumblings have grown louder and the imbalance of jobs and housing has worsened. From 2010 to 2015, the Bay Area (the San Francisco/Oakland and San Jose Metro areas) grew by 450,000 people, while just 81,000 housing units were permitted for construction. And of those units permitted, only 25,000 were single-family residences.

The lack of production of single-family homes is important because the Tech Bros do, eventually, pair up and have kids. While they can probably find an apartment in the Bay Area, finding a house where little Bit and Byte can run around the yard will be increasingly difficult, no matter how fat the tech employer’s compensation package.

It is one thing for Google, Apple, Facebook, Airbnb and other tech firms to recruit young talent right out of the world’s best schools. But can they retain the best of those recruits as they move beyond the futon-on-the-floor stage of life? This is an increasing concern in the Bay Area. The Silicon Valley Competitiveness and Innovation Project’s 2016 benchmarking study says: “Skyrocketing housing prices and increasing traffic congestion are eroding our quality of life and causing many residents to relocate to other parts of the country.”

The study noted that in 2015, domestic net migration to Silicon Valley itself was negative — that is, more U.S. residents moved away from the Valley than moved in, with foreign immigration as the remaining driver of growth in the adult population.

So what are a bunch of hundred-billion dollar companies supposed to do? The obvious solution is to promote development of more housing. But even the Innovation Project report admits that effort is going backward. It seems unlikely that these firms, even as powerful as they are, can reverse decades of public policy and create a robust development environment.

There is another solution: Set up shop somewhere else where employees can afford a home and still have something left for fancy preschools and a brace of BMWs. If the big Bay Area firms adopt that solution, the most logical place to go would be Seattle.

Why Seattle? First, because according to Innovation Project benchmarking data, Seattle is arguably the second tech hub of the country. But also because it is not new territory for these firms. For at least 20 years, some of these big tech firms have been establishing engineering centers along the Seattle-Redmond axis, with the expressed purpose of picking off talent from Microsoft, Amazon and each other.

The rationale is that Seattle has a large pool of high-level talent looking for new opportunities but refusing to move to the Bay Area. These mid-career people want to further their careers with the California firms but they have homes and families here. They are embedded in the schools and communities, have embraced the Northwest lifestyle and have no intention of giving any of that up.

Judging from the proliferation and growth of these engineering centers — Geekwire lists 81 of them — the experiment seems to be working. Google has maxed out its Kirkland campus, taking space in Fremont and soon in South Lake Union. Facebook is moving into a new larger space on Dexter Avenue, Uber has 14 openings for engineers in its Seattle office and rumors abound that Apple is looking for a big chunk of space.

So, what if these firms decide that rather than fight the Bay Area housing wars, they will expand operations in Seattle where housing prices are lower and wages comparable? Eventually this could mean transformation of the Seattle offices from satellites performing discrete engineering projects to larger, self-contained operations housing entire programs.

Employees currently in the Bay Area would need assurance that Puget Sound is not Siberia and that shifting to a Seattle operation is not a career-limiting move. Current engineering office employees have made their peace with Seattle’s distance from headquarters. Will employees working at the mother ship be willing to make the move?

The answer seems to depend on age. A survey of tech employees by Indeed.com found a clear pattern. Younger tech workers place a high value on being in Silicon Valley, while mid-career and older tech workers are much less concerned about being in the center of the action.

If this scenario plays out over the long term, the implications for growth in the region are huge. If even 5 percent of Silicon Valley’s tech workforce were to relocate to the region, that would mean adding another Amazon. The legitimacy provided by these operations would attract more startups, and venture capitalists would find Seattle a more cost effective place to grow young companies. And with the high employment multipliers that tech jobs carry, employment across the economy would explode.

Is the region ready for this kind of growth? Of course not. The 20-year population projections from the State Office of Financial Management that guide local planning are based on growth rates well below what we have been experiencing. Housing production, while better than in the Bay Area, is still far behind demand in King County, especially for single-family residences. A big surge in tech employment would further crowd out the less well remunerated and put additional pressure on already-high home prices. Well-paid tech workers with families would colonize the remaining affordable areas of Seattle and close-in suburbs and force service industry workers farther up and down I-5 looking for a home they can buy with their non-tech incomes.

The Silicon Valley Competitiveness and Innovation Project report shows that Seattle tech employment doubled between 2004 and 2014, and the job growth just keeps coming: Over 1 million square feet of office space was leased last quarter, with 3 million square feet under construction in Seattle and Bellevue. Add another jolt of expansion from Silicon Valley, and the dizzying growth of the 1990s will start to look pretty tame.

Michael Luis is a public affairs consultant with a focus on housing, growth and economic development issues and served as mayor and councilmember in Medina. He is author of Century 21 City: Seattle’s Fifty Year Journey from World’s Fair to World Stage. He can be reached at luisassociates@comcast.net