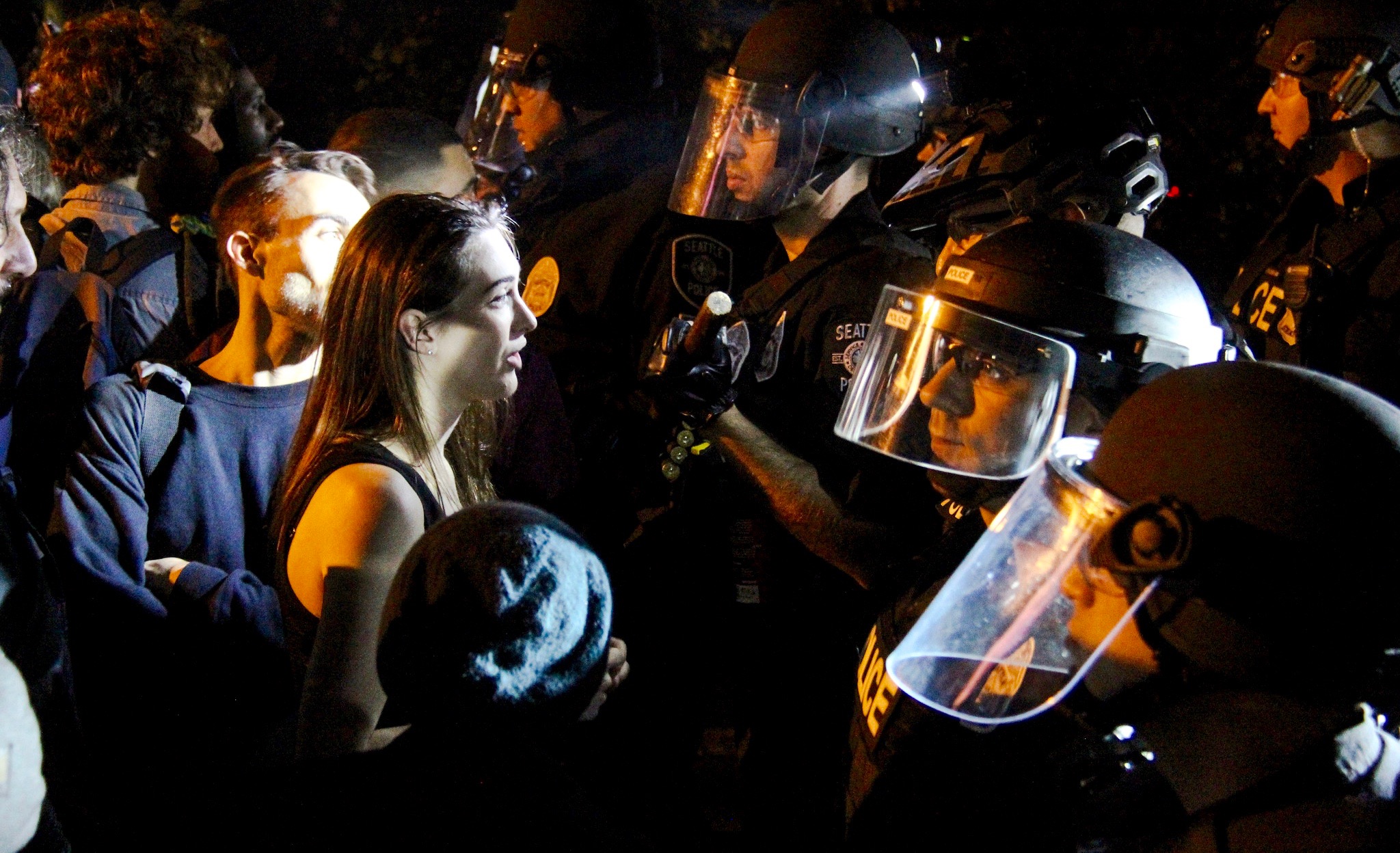 A peaceful protest in Seattle the night after the 2016 election.

Many of us are still trying to process what to do as Donald Trump prepares to take over all branches of the federal government. We are not without recourse, and the post-election pep rally at City Hall led by Seattle Mayor Ed Murray charted a path forward: Don’t stop talking the talk, or walking the walk. Seattle is “the same city that it was yesterday," Murray reassured.

Murray has always wanted Seattle to be a progressive role model for the nation. We can still be that, even if much of the nation is looking elsewhere for inspiration.

The GOP victory will likely make us feel alone, isolated. We’ve been through this before. When John Kerry lost to George W. Bush in 2004, The Stranger published a powerful cri de coeur about living on a lonely blue urban archipelago in a sea of red. Already, some on the Left Coast are reviving the idea of secession from the United States, notably the Calexit movement that is strong on Twitter and debated on Reddit, if nothing else. The idea of a Pacific Republic or an independent California is old, but it’s not going to happen anytime soon if ever.

Still, many progressives can relate to the sense of wanting to separate. Here are some suggestions for staying engaged, even if at a remove.

1. Cascadia as a state of mind

The Northwest has its own secession dreamers in the Cascadia movement that seeks to unite the bioregion incorporating Northern California, Washington, Oregon, British Columbia, parts of Idaho and Montana. While real secession from the U.S. and Canada isn’t an option, we can, as one advocate has suggested, have nationhood without being a separate country. In the age of Trump, thinking and acting regionally will become more important. We can sharpen our definition of what it means to be Cascadian citizens engaged in the region, sharing values, being open and inclusive (unlike some separatist advocates), and striving for social and racial justice. We could strengthen regional cooperation with less regional competition. Consolidating ports? Working on interstate regional mass transit? Building housing? Planning less parochially?  Developing regional structures between states and provinces — without reliance on the federal governments — could prove to have lasting value and be more sustainable than if we act on our own.

We have to tackle the economic urban-rural divide. Trump’s voters correlated here, and nationally, with counties with low economic growth and, often, higher unemployment. Our rural areas are hurting, and many have been for a long time (this is not Barack Obama’s fault, the problems date back a century or more — see Teddy Roosevelt’s Rural Life Commission in 1908). Corporate agriculture, technology and resource depletion have changed things fundamentally. Job opportunities are more robust in urban areas. Still, we have to find ways of sharing regional prosperity.

Education is a huge factor so people in small towns can learn modern skills and stay in place. Providing more social service resources is important: Homelessness is a growing but often hidden problem in rural communities. One trend to support: job and innovation incubators that produce new small businesses, such as ones that have popped up in Twisp and Tieton in Eastern Washington. Not everyone is going to move to South Lake Union for an Amazon job. We need to do more for communities of all kinds that are being left behind.

Much of our region is federal land. There will be huge pressures to turn management of some of these back to the states, and a Trump administration is likely to put a fox in charge of the henhouse. Trump campaigned on allowing more resource and energy extraction, on top of deregulation. As the treatment of the occupiers of the Malheur Wildlife Refuge in Oregon shown, cracking down on armed right-wing occupiers who don’t recognize federal authority  is light as they have largely gone unpunished, despite the cost to taxpayers and damage to public lands and cultural resources.

We’re going to have to be more vigilant about the pressures to exploit these properties, mobilize private and non-profit entities to protect parks, and find ways of making access to them easier. Easier access will allow more diverse populations to use the outdoors and it will make economic alternatives like tourism a more rewarding use of public lands than despoiling them.

Many conservatives and liberals agree that “free trade” is not free. Trump is aligned with such skeptics, as is Bernie Sanders. Yes, Seattle and Washington are reliant on trade, but we have long passed laws and tax breaks and virtual subsidies to keep companies like Boeing in place, and keep Microsoft and Amazon happy. There’s nothing free about those deals. We are protecting our regional interests in doing so. But we also need a system that is fairer to citizens, one that also requires our corporate citizens to give back more of what they earn to help cover the costs of prosperity. Microsoft lobbies for education reforms, but could pay a lot more in taxes to actually fund education. There has to be a great regional compact on the give-and-take of place and profits.

As Murray suggests, we’ll have to do things on our own, difficult but not impossible. We have been in the process of this for decades, since the 1980s at least, when the federal gravy train began to run out of gravy. Obamacare will likely be repealed or heavily cut back, but we tried to provide health care for citizens before Obamacare was on the drawing boards (see our state's 1990s attempt at health care reform). We might have to do it again, perhaps in cooperation with nearby states. We might not get federal funds to help with housing, homelessness, transit or other needs. We have just proved we can suck it up to build infrastructure we need even if it takes more time. The passage of the $54 billion ST3 is an example of local resilience in place of federal funding that could have paid for an entire system had we built it back in the '60s (foolish us). To continue to make such commitments, however, we’ll need to consider the our fiscal situation.

Washington is already faced with huge bills, including the state Supreme Court's McCleary mandate to fully fund public education. We are moving too slowly in that direction, but it has to be done. But it’s incumbent on us to also show some fiscal discipline and more creativity. We have a systemically unfair tax system in this state — too much of the tax burden falls on the poor and working class. By some measures, we have the worst such tax structure in the nation. We need an income tax. We need a carbon tax. We need to reform the business & occupation tax and reduce the sales tax. These measures are tough to pass, but if we want to continue to be ambitiously progressive, we have to find a way to control costs and increase revenues along the way. We are also going to have to consider — selectively — some public-private partnerships along the way, something the Trump administration might warm to.

7. Note to self: Remember hope

The West Coast, and particularly the Northwest, has long been a destination for dreamers of all stripes. European settlers early on were American migrants who wanted to make a better country from scratch. They left the old farms and old cities, came to “God’s Country” and wanted to fulfill promises that were not being fulfilled “back East” — to escape the class systems, old-boy networks and political machines that restrained freethinkers, entrepreneurs, idealists. Those original pioneers have been joined and replenished by people from around the world who have come in the same spirit.

On election night, I pointed out that this was a hopeful path forward — that we come from people who were undaunted, individualistic, creative. (Some were also rapacious, and they are still with us too.)  That is where hope lies now. If the Trump era scares many of us, then let’s think our way out of fear. Let’s create a sustainable model that becomes the envy of the nation.

It’s not enough to simply survive the next four years. We need to thrive. That’s going to take a lot of work, and some clever problem-solving.