'They voted to ruin people’s lives’ — students on Trump's win 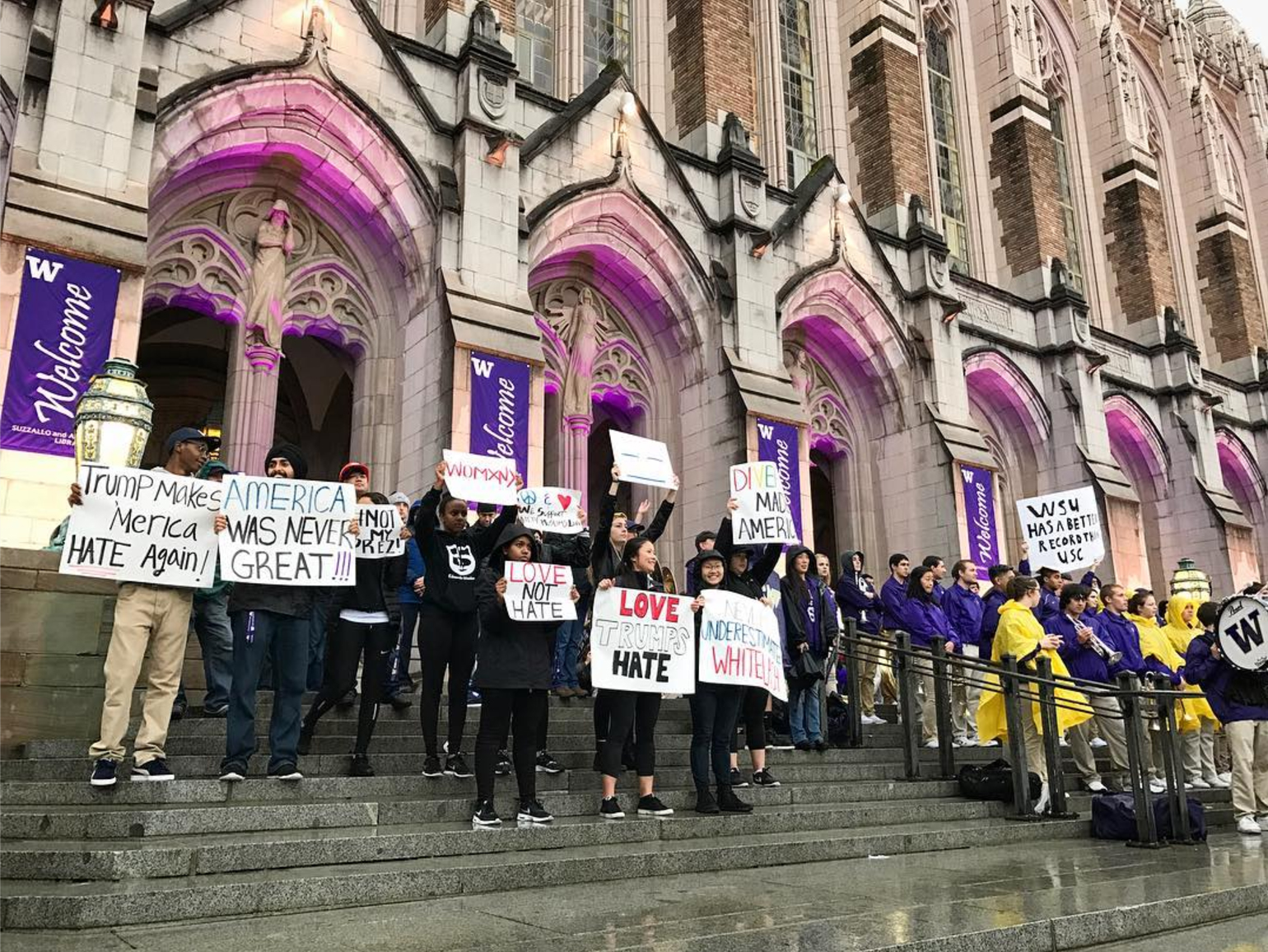 A protest at the University of Washington following the election of Donald Trump.

On the night of Nov. 9, hundreds of students marched through the streets of Seattle. To the din of “Not my president” and “Pussy grabs back,” they spilled on to the University of Washington campus where they gathered for a rally on the school’s Red Square

Helicopters circled overhead and a squadron of bike-riding cops flanked the crowd, their wheels running over cardboard signs that littered the sidewalk. Many featured Donald Trump’s name slashed out in sharpie. Traffic stopped, drivers honked in anger or approval, and a child leaned out of the window of a sedan offering protesters a small hand for high-fives. A woman in the front seat cried.

The march at UW provided an early sign of what has been the strong reaction of many young people to the election of Donald Trump as president. Demonstrations have taken place at campuses across the state, including Whitworth in Spokane, Pacific Lutheran University in Tacoma, and in Western Washington, where a contingent marched from the campus to downtown Bellingham the same day as UW’s protest.

The anger and disappointment on the part of progressive-minded students— particularly people of color, women, and members of the LGBTQ community— continues to be felt this week. On Monday, hundreds of UW students from both Seattle and Bothell walked out as an estimated 5,000 high school and middle school students left their own classes to join protests.

The demonstrations in Washington, along with the Portland protests-turned riots are part of a greater national reaction driven in a large part by students concerned with how marginalized people may be treated during a Trump presidency. Harassment occurred throughout the campaign, but perpetrators appear to have been emboldened by the election of a Ku Klux Klan-endorsed candidate—there have been reports of an uptick in hate crimes nationally, with at least one involving an attack on a University of Michigan student wearing a hijab who was threatened with being set on fire if she refused to remove it.

An estimated 24 million people aged 18 to 29 voted in this election, according to the Center for Information and Research on Civic Learning and Engagement (CIRCLE), with exit polls indicating roughly 55 percent voted for Clinton and 37 percent for Trump. Among college students, however, the support for Clinton was overwhelming, with Donald Trump’s victory stunning students demographic more than most.

On election night, a chant of “Build that wall” broke out in a bar frequented by University of Pennsylvania students; the students themselves were reported to have started it. Things went downhill the next morning when a University of Oklahoma student used a group texting service to target black students at Penn. The message thread was smattered with racial slurs and images of Jim Crow-era lynchings.

Back on the West Coast, University of San Francisco student Whitney Reese participated in a peaceful protest on the same night UW students marched on Red Square. That evening, a red flag stamped with a swastika flew over a Dolores Heights home.

Reese says the atmosphere USF has remained peaceful, but she has seen tension between members of her sorority, some of whom cast ballots for Trump. “They say they aren't racist or sexist, but they voted for Trump,” she says. Reese — the daughter of a Mexican immigrant and a black woman — doesn’t buy this logic. “A vote for Trump holds so much meaning more than it just being a vote... They voted to ruin people's lives.”

Classmate Adriana Levandowski says that the racism and violence seen after the the election is especially shocking in the “liberal bubble” of San Francisco. “A lot of people are really afraid for their safety,” she says.

She also sees another side, however, noting that Trump supporters have reported to professors that they are uncomfortable sharing their opinions. She deems the level of friction unproductive. “Before I can even talk to a Trump supporter” she says, “I need to make sure I'm in a place where I can really listen, rather than being blinded by rage.”

Austin Nasso, a student at University of California Los Angeles, echoes this thinking. After observing protests on campus, he was frustrated by the lack of productive dialogue.

“Some [students] are creating this echo chamber where they’re only hearing their own side of things,” he says of many of his classmates. “They’re creating more polarization. … To publicly speak out about Trump is to get cut out.”

A UW student who preferred not to be named expressed a similar concern. “I am hesitant to share my [views],” he says, “because I know I would be harshly judged and criticized for them and potentially labeled for my positions.”

At Stanford University, student Katherine Phan says “there has been a lot of tension between communities of color and the general privileged white community” since the election. Phan is disappointed by the “the violence that POCs have endured before and after this election by those with white privilege” and says Clinton’s loss made her realize “that even the most accomplished women will not be able to overcome sexism, (which) was pretty upsetting.”

In Florida, a student at Embry-Riddle Aeronautical University —who preferred not to be named due to the small population of the university— says he was confronted by a group of his fraternity brothers, who are aware of his status as an immigrant on a working visa. “Have you packed your bags yet?” one of them asked. “January 20th, you’re out of here!”

An hour away at the University of Central Florida, student Joshua Dickens speaks highly of UCF’s peaceful response to the election, but recalls divisiveness on campus during election season.

“It was hard to ignore,” he says, describing students dressed up in orange jumpsuits performing a crude cosplay of an imprisoned Secretary Clinton. “Then again,” says Dickens, “students ripping up Trump-Pence signs and throwing them in the trash doesn't help much either.”

At the University of Texas San Antonio, students and professors led walk-outs and the city’s large LGBTQ and Latinx communities holding gatherings. Following the election, UTSA student Jayne Simpson says, “Racism, prejudice, and hate are alive and well….Everyone claims they aren't ‘like Trump’… but they’re discounting the way the minorities around them feel, literally embodying white privileges in America.”

At Georgetown in Washington D.C., senior Kat Chen says the usually vibrant campus is bleak; no one she knows plans to attend the inauguration, a hallmark of the Georgetown experience. “Fights have been breaking out in classrooms,” says Chen, “many becoming violent and triggering for students.” She says she has seen more crying on Georgetown’s campus this past week than in all of her time at the university.

Back in Washington state, Pacific Lutheran University student Alaa Alshabani describes a rally on campus becoming tense when a group of white, male athletes mocked protesters by attempting to create a wall with their bodies. A few days later, PLU’s president sent out statement with the subject line “A Plea for Unity.”

“Most of all” she continues, “I fear for all of the marginalized groups in this country who will be paranoid due to the rise in hate crimes fired by Trump's rhetoric. I fear going backwards.”

So where do we go from here? “First, I think we all need time to recuperate,” she says. “For those who supported Trump, I think they need to be respectful of that. Then there needs to be open and respectful dialogue. People need to talk to one another, to understand one another, to respect one another….We see instances of people acting before thinking— protests turning into riots. That is not OK.”

She also calls for compassion. “We need to do acts of kindness often,” she says. “For that whole safety pin thing going around … it is not just a symbol. It means that if you wear one and you are around an instance of injustice against a marginalized person, then that person will expect you to intervene, to stand with them, to be of help to them.”