UW health program for homeless is at risk 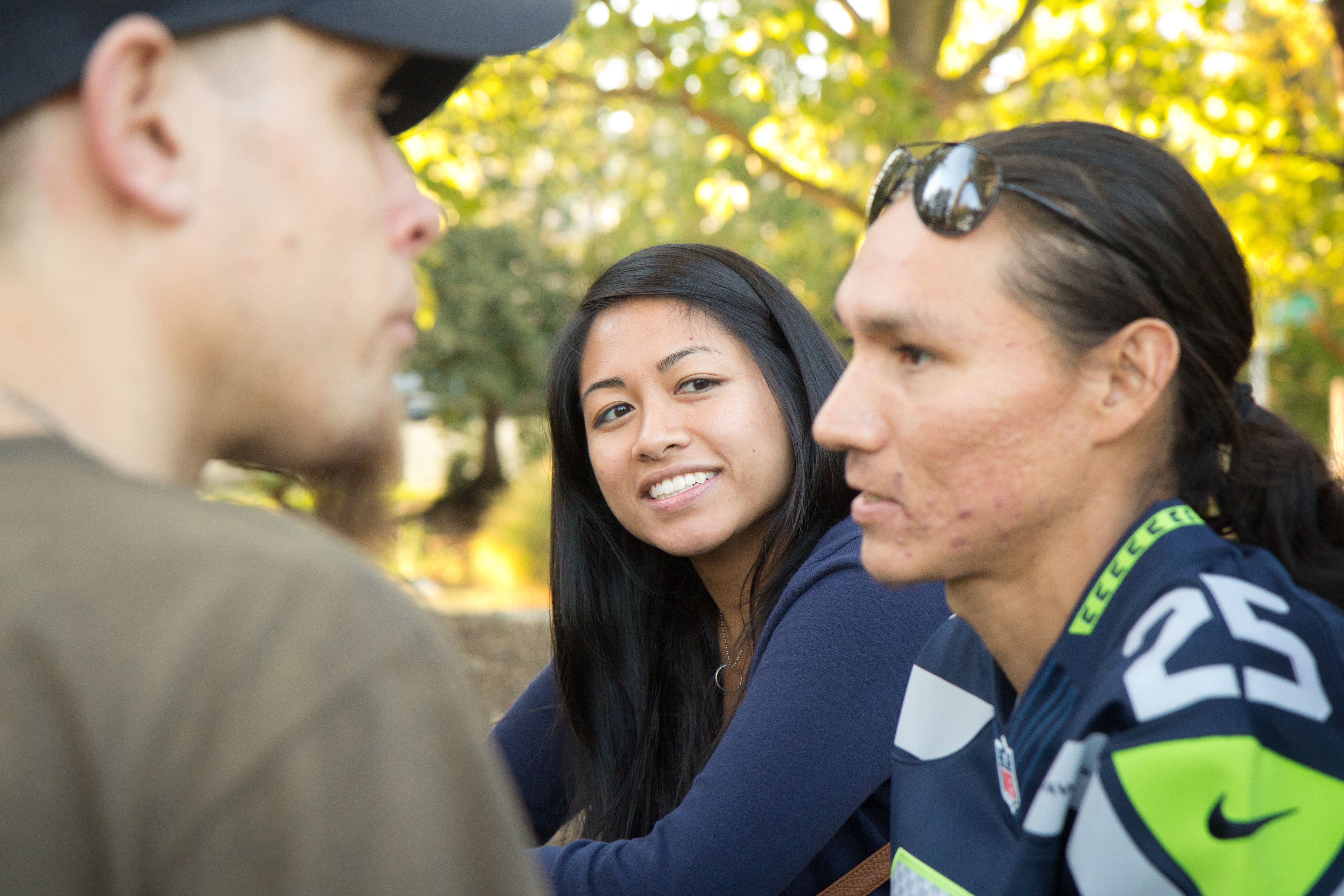 Volunteer and pharmacy student Czarina Franco visits with U District residents about health services they could receive from the Street Medicine Program.

When Krystal Koop was 12 she lived on the streets of Anchorage, Alaska. She had fled a broken home, leaving a life of dysfunction, alcoholism, and abuse behind.

But Koop had nowhere to go, and for the next two years she would be homeless. On good days she would stay on friend’s couch, but there were nights where she found herself sleeping on the streets.

Koop had been homeless for over a year when she got sick. Her nerve endings became exposed, poking out of her skin; she was 13 and didn’t recognize the tell-tale signs of the shingle’s virus.

“To get that at 13 was unusual, but not so considering the situation,” says Koop, now an adult and recent master’s graduate of the UW School of Social Work.

Koop’s harrowing personal experiences, her time as a social work professional, as well as her recent studies in social work contributed to her decision to become involved with the launch of an innovative effort to provide healthcare to the homeless. The program, known as University District Street Medicine (UDSM), has gained ground through University support over the past couple of years, but Koop and others say the effort needs sustained financial backing — preferably from the UW — to remain viable.

The program’s leaders, student volunteers and faculty supporters hope that the health care program will be recognized as a critical way of supporting those without housing. The support is especially crucial as UW will be opening a homeless encampment on campus this coming winter.

Koop says her situation as a teen helped shape both her work with UDSM, which she helped create, and her career as a social worker.

After Koop left home she was a ward of the state, and was assigned a social worker whom she never met face-to-face. She spent many months living in a shelter while a broken and bureaucratic system tried to find a place for her.

“It was a very stressful, scary time,” she recalls.

Koop eventually moved across the country to stay with a classmate’s family in California. She’d been suffering from shingles for several weeks when a friend’s mother noticed her discomfort, and Koop showed her the painful rash that had spread along her hip. “Why didn’t you say anything?” the mother asked, shocked by Koop’s silence.

“There are so many reasons I didn’t say anything,” says Koop pensively, explaining that not only was there nobody to tell, but that there had been so little that had shown her it was OK to trust somebody, “that it was OK to be vulnerable,” she says.

As for her mission to provide health care for the underserved, Koop reflects on her short but aggressive battle with shingles. She points to the moment with her friend’s mother as being essential to UDSM’s philosophy, “because that’s how we approach patients” explains Koop. The volunteers are aware that “there are many layers we don’t know … that we won’t know.”

Prior to finishing her master’s, Koop completed over 10 years of direct service in everything from community mental health services to advocacy work on behalf of criminal justice reform. Eager to apply her experiences to an academic setting, Koop arrived at UW with the intention of helping her community.

Her opportunity arrived in the form of an email from a medical student during her first year of graduate school. She remembers the message well. “Would anyone be interested in planning a student run clinic in the U-District for homeless people?”

A hodgepodge group of students from across the UW health science schools — “two med students, a nursing student, a physical therapy student,” she recalls — joined forces and began to lay the groundwork for what would soon become U-District Street Medicine.

Koop says that UDSM garnered “tremendous support from faculty from all of the schools,” listing several including the Schools of Nursing, Pharmacy, and Dentistry. As both faculty and students clamored to support the program, the graduates’ dream of providing health care to the underserved started to become a reality.

In 2013 Koop and her team began distributing needs assessments to the homeless population in the U-District, a group that is disproportionately made up of transient youth, the kind that she had once been a part of.

“Our original half-baked plan was to start kind of a traditional clinic” says Koop, describing a brick-and-mortar facility where the homeless could enter, be diagnosed and ultimately treated. But feedback from the homeless made it clear that Koop and her team would have little success with this approach. “We got — literally and figuratively — ‘meet us where we’re at’... ‘get to know us’” says Koop.

A second survey asked the homeless about their current care situation, asking questions like ‘what do you wish your healthcare provider did’ and ‘what would be the one thing you wished they would do?’ Koop says of their pool of respondents, 73 percent said they wanted their health care providers “to listen and respect [them].”

Today, UDSM is structured through partnerships with community centers and agencies already working with the homeless, explains Koop. Currently, the program is affiliated with Saint Vincent DePaul, which has long worked with the poor through volunteers in individual neighborhoods, as well Elizabeth Gregory Home, a day center for homeless and transgender women.

“It’s a vulnerable state to be in when you’re homeless,” says Koop. “When you’re a woman, magnify that. Trans? Keep kicking it up.”

What distinguishes UDSM, however, is what the program refers to as “true-street outreach.” Without a physical clinic, UDSM can’t deliver a full treatment regimen to patients, so volunteers focus on providing immediate care and help navigating resources. In other words, Koop and her team — which today is made up of over 75 members including outreach managers, clinicians, undergraduates, and grad students — go to work on the ground.

“We have the District divided up into three zones,” says Koop, “and we pound the pavement.”

In small teams — “we don’t want to overwhelm folks on the streets,” she says — students of various disciplines visit areas in the U District with high concentrations of homeless, always accompanied by a licensed clinician from any of the participating health science disciplines. “Small groups really dig in,” says Koop. “These students are learning how to deliver quality care ... compassionate care.”

Moreover, University District Street Medicine provides a unique practicum opportunity for students who are required to complete field work as a part of their degree. UW students often choose to work with UDSM for capstone projects, or to receive academic credit. Koop says that part of the program’s hope for expansion is to create a clinical rotation site in partnership with UW’s Health Science schools.

As the organization grows, it continues to survey people, asking them if they would go to a physical clinic, as had been part of the original plan. Now, she says, “we’re getting a resounding yes. We’re hearing ‘if U-District Street Medicine is opening one, yeah, I’d go there.’”

Through outreach and relationship-building, UDSM has tapped into of one of Seattle’s most sensitive demographics. The success lead to rapid expansion, “we were growing big, we were growing fast,” says Koop, “we ran on energy… we still do.”

In early 2016 UDSM appealed to UW for this support, “and UW came through,” says Koop, the School of Social Work, the Community Engagement Office and School of Medicine "all cobbled together funding for this year.”

But as the program attempts to expand into 2017 obtaining further funding has been met with some resistance. Recently, Koop and her team proposed a budget plan — addressing staff, supplies, and operations — to the UW Board of Deans and Chancellors. She went into the meeting with high hopes, but was met with reservations.

The board’s suggestion of “soft-funding” options — seeking donations and more partnerships — outside of the UW, would likely lead to shutting down the street medicine operation. Koop describes this budget option as “bleak.”

“It’s just not sustainable,” she says.

Dean of UW Medicine Dr. Paul Ramsey speaks highly of UDSM “and the wonderful things they are doing.” Dean Sean Sullivan of the UW School of Pharmacy also expresses his support for UDSM’s mission, but suggests that the money should come from elsewhere. “The Board of Deans,” he says, “does not provide funding for any organization.”

That view seems to have prevailed. Koop says she got word late last week that the health sciences deans had decided against funding for the coming year.

So, she is worried about the future of the program when her contract ends in early January, just as the University launches a new effort to engage with the homeless. As UW’s winter quarter begins, the residents of Tent City 3 — an organization that provides temporary housing to homeless individuals and families — will arrive on campus. Students, faculty and campus groups have looked for ways to incorporate the newcomers into their activities.

Koop says that the lack of new funding from the deans puts the program at real risk, but she has faith in the faculty, students, and other volunteers to find a way to keep going, at least for a time, on their own. And the program is looking at several other possible sources for stable funding from outside UW.

For U-District Street Medicine, it seems like the right time for the University or someone to make a commitment to better, more sustained health care for the homeless. Moreover, the already neglected homeless population may become even more vulnerable if UDSM is forced to end its efforts after the university’s one quarter experiment with an on-campus Tent City ends next spring.

Earlier this year King County recorded the total number of unsheltered individuals on Seattle’s streets — the final count: 10,047 people. With a figure like this, supporters wonder, can Seattle afford to lose an organization like UDSM? Koop and her team don’t think so.