Next lands commissioner will rule one-fourth of Washington 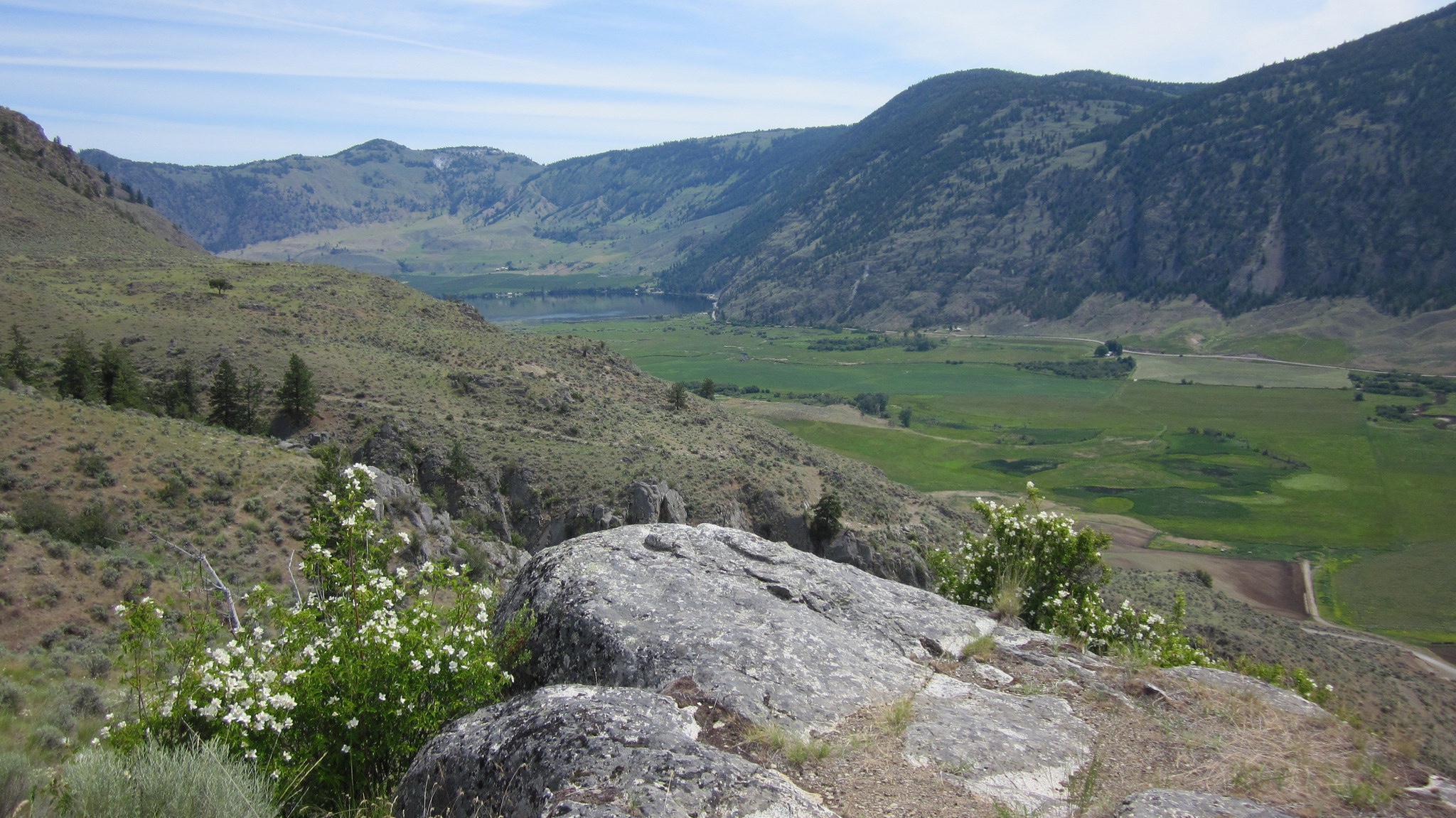 Palmer Lake in the Loomis State Forest in Okanogan County.

In 1968, Richard A.C. Greene ran for Washington Commissioner of Public Lands on the promise that if he were elected, he would "go out fearlessly and commission the land." Greene was poking fun at the obscure title of the job that Democrat Hilary Franz and Republican Steve McLaughlin are seeking in the November election.

Even now, voters may find the duties of the person they will elect as obscure as the title.

The retiring incumbent, Peter Goldmark, says that when he traveled recently around the state, he'd ask, "'Does anyone in the room understand what I do?' Nobody understood a thing."

And yet, the Commissioner of Public Lands leads the Department of Natural Resources (DNR), which administers or regulates nearly one-quarter of the state. It manages state forests and aquatic lands, regulates logging on private land, oversees a million acres of non-forested land that can be used for agriculture.

Goldmark talks about "the duality of this office”: On one hand, the commissioner must generate revenue — from such activities as timber sales and leasing of aquatic areas and range land — for schools and other public institutions. On the other, he or she must protect environmental values. Both candidates acknowledge that duality. The question is how each would balance the opposing demands.

Both McLaughlin and Franz say they understand the competing demands and are well prepared to handle what often seem to be conflicting responsibilities.

For each of them, however, support seems to come predominantly from one side or the other of the spectrum. The candidates' donor lists follow a stereotypical left-right split: Franz, the Democratc, has the environmental groups and unions — and a lot more money — McLaughlin the forest products companies and farm bureaus.

"I'm not a good old boy," McLaughlin says. Does he think he has been mis-characterized?  "I certainly do.”

It was reported — and then unreported — that McLaughlin took part in the occupation of the Malheur National Wildlife Refuge, for which a jury just cleared Ammon Bundy and others of conspiracy charges. McLaughlin, a retired Navy officer, says he wasn't there and he didn't support the occupation.

He doesn't deny that his name appeared as "veterans coordinator" on a press release issued by an anti-federal-land-management group called the Coalition of Western States (COWS) that proclaimed the "bureaucratic terrorism [of the Forest Service and BLM] must stop." He says that doesn't represent his views; he signed on only because he shared the group's outrage over a federal court decision that ordered the eastern Oregon ranchers Dwight and Steve Hammond to serve extra time in jail for setting illegal fires on federal land. He subsequently distanced himself from the occupiers, even ending up with a rather favorable story on the website of a prime tracker of hate groups, the Southern Poverty Law Center, which he told, “I definitely regret being pulled into that orbit.”

Neither McLaughlin nor Franz has run for statewide office before, but Franz has served on the Bainbridge Island City Council.

With the state facing the state Supreme Court's McCleary order to fully fund public schools, the candidates naturally imply that logging in state forests can be part of the solution. It can't — not in any meaningful way. When Washington became a state, the federal government gave it two sections of land in every township for the support of public schools and other public institutions. Revenue from state lands, however, never paid all the schools' operating expenses. Now, it doesn't pay any. Fifty years ago, school enrollment rose sharply, communities balked at the cost of creating more classroom space, and Washington voters passed a constitutional amendment that channels all school revenue from state lands into school construction. The state now uses that money to reimburse school districts for less than 10 percent of their capital costs. State lands don't pay the teachers' salaries, supply bills and transportation costs that lie at the heart of McCleary.

When pressed, both candidates concede that state lands won't contribute to the funding that the court has called for. But both insist that given the schools' vast financial needs, every little bit helps.

Earning money for school construction from logging operations could continue to become more difficult, at least in some places. Goldmark says that he hopes a marbled murrelet habitat conservation plan (HCP) will finally emerge before the year ends. The murrelet, the little bird that nests in coastal old growth and fishes at sea, was listed as threatened back in 1992. A plan that protects murrelets will clearly limit logging in many places near the coast.

Franz notes that different murrelet options would have differing impacts on harvest. However that plays out, she says, "The challenge is going to be meeting our fiduciary duties to schools and counties." She says we must "make sure that we are not turning our backs on those communities.”

McLaughlin says that of course, he wants to avoid endangered species litigation, but he wonders: Do we have too much land protected? Too little?  He thinks we should figure that out.

He's sure we could log more in forests that don't provide vital habitat. "We are currently harvesting way below our sustained-yield calculations," he says.  Besides, he says, "Leaving the forests alone hasn't worked too well." He also talks about the "despair" and related meth addiction that plague many depressed rural areas. He suggests that the DNR could get together with federal land managers to find ways of generating more revenue from public lands there.

Franz, who stepped aside as executive director of Futurewise to run for lands commissioner, notes that the counties are being squeezed in ways not foreseen back in 1990 when the Legislature passed the Growth Management Act. Concentrating growth in cities has led to increased housing prices, which has forced low-income people out into unincorporated areas. She calls this the "suburbanization of poverty," which the "counties do not have the resources to address."

Franz talks about diversifying rural economies to make them less dependent on forest products. (This is a sound idea, but not a new one.  The sad fact is that some counties which may have made sense as independent governmental units in the economy of the late 19th century make none in the economy of the 21st.) She also talks about possibly using low-value or unused state agricultural land for wind or solar power installations. That could generate more money and help expand the state's supply of carbon-free energy.

McLaughlin talks more about increasing the value of agriculture to both generate more revenue and ease the strain on farmers and ranchers who currently lease state lands and who tell him, he says, that "they're being squeezed real hard.”

"Sitting in my living room, looking out at a stand of firs and hemlocks," McLaughlin says, "the treetops are all crowded and jammed together." The forest isn't healthy, and if it dries out, the odds of a fire are high. During the drought of 2015, he says, "we were all walking on pins and needles.”

In practice, restoring forest health — particularly urgent east of the Cascades — means clearing the forest floor of dead wood that serves as kindling to start forests burning and the dead or dying trees that fuel big fires. "That fuel load has to be removed," Franz says, although she says the department doesn’t have the money to do it.

Hauling dead wood from the forest floor and removing dead or moribund trees is a huge task. The state won't pay for it. That leaves private enterprise, which is, of course, motivated by profit — hard to come by if you're extracting lousy wood from remote forests in areas from which virtually all mills have disappeared. How can the state make it worth anyone's while to cut and haul that wood?

Goldmark suggests we can burn some of it as biomass for energy production. Whether or not biomass should be included in "clean energy" legislation has been controversial. The Senate energy bill — and states with lots of trees — want to see it included.  Some environmental groups do not.

Goldmark says that Washington has been among the states supporting the U.S. Senate energy bill’s inclusion of biomass as a clean source. It's not just a question of biomass versus cleaner methods of generating electricity.  It's also a question of more big forest fires versus fewer.  "In 2015," Goldmark notes, "wildfire was actually the second largest emitter of carbon dioxide."

Both Franz and McLaughlin say they'd consider biomass as a use for wood that, without a market, might go up in smoke anyway in forest fires.

In coming years, Goldmarks says, "It's only going to get hotter, and it may get drier." And yet the Legislature has been reluctant to provide money for fire prevention on some 2.7 million acres judged in need of treatment such as thinning or brush removal. One goal that has eluded Goldmark, he says, is "convinc[ing] the Legislature during the wet, rainy period of the year when they meet to pour more dollars toward fire suppression."

Both Congress and the state Legislature have provided torrents of money for fighting wildfires, trickles for preventing them. Public money has been hard to come by for other things, too. Both candidates talk about recreation, but five years ago the Legislature slashed funding for parks and recreation on state lands, which is why, if you want to park at, say, the Mount Si trailhead, you have to buy a Discover Pass.  And local jurisdictions control the land-use regulations that let people build houses in places likely to burn. A lot will lie beyond any new commissioner’s control.

Some voters may choose a new commissioner without fully understanding what they're choosing him or her for. But the next time a town is threatened by fire or landslide, the next time a renewing driver is asked to buy a Discover Pass, the next time a rural county faces a budget cut or the state is sued over its alleged failure to protect an imperiled species, a lot of them will figure out whom to blame.