An astoundingly dark recap of 2016's animal news and videos 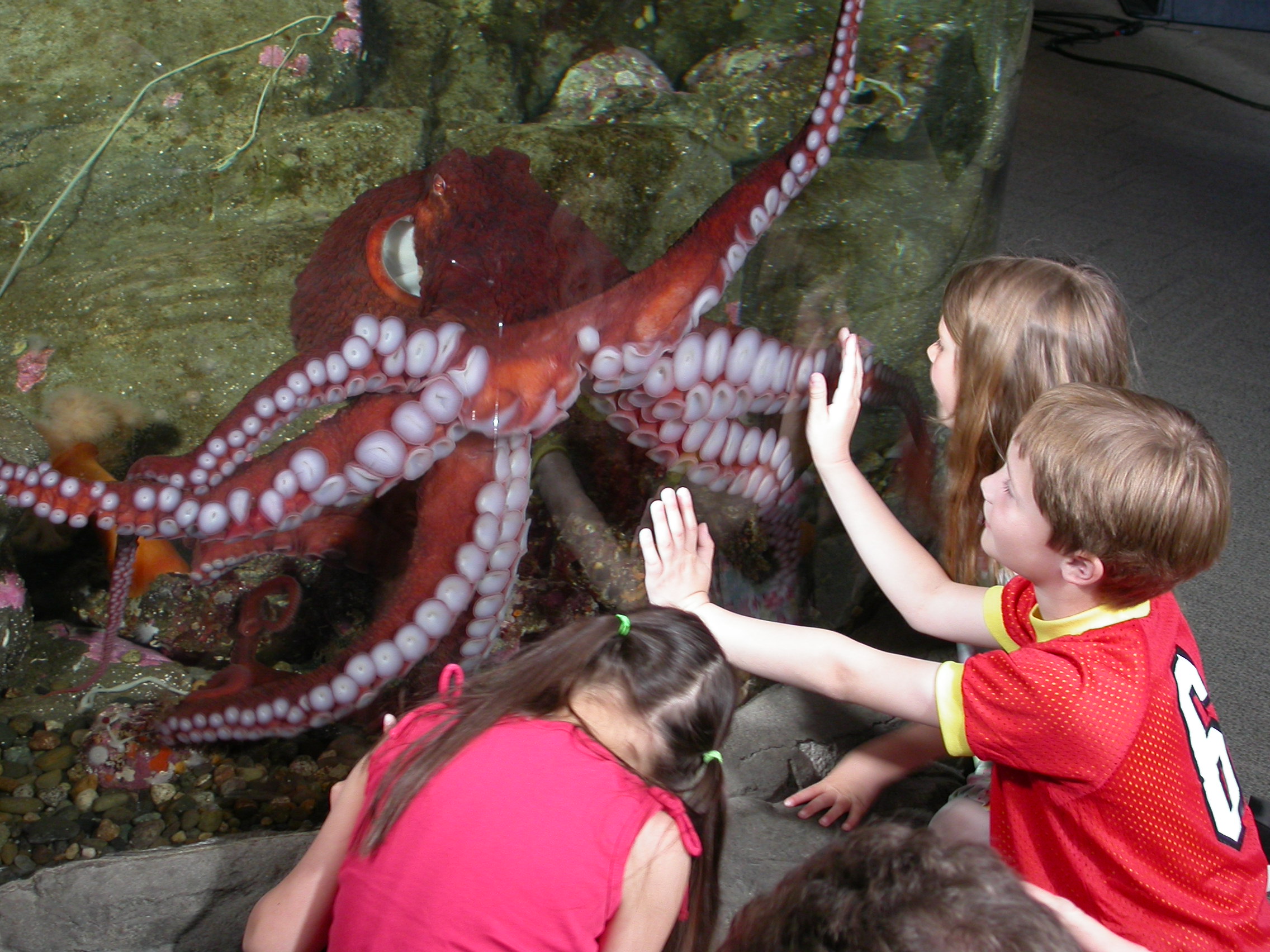 “Sometimes they’ll ‘hang out’ with each other for an hour,” says the Seattle Aquarium’s Tim Carpenter. “Sometimes it’s 12 hours.”

Like many people, we here at Crosscut tempered the year’s barrage of bad news by turning to animal videos and stories on occasion.

We published several of our own as well. But in keeping with our journalistic standards, almost all of them were kind of grim. For those who steadfastly refuse to the call of easy animal-related content, we present some of our top stories of the year...

Attention: The public octopus sex act has been cancelled

This story by Samantha Larson attracted national headlines. It details the lonely Valentine's Day of Kong, a 70-pound male octopus at the Seattle Aquarium. Every year, the aquarium brings two octopuses together for a public mating act. This year, however, they could not find any females big enough for Kong, crushing his chances of romance.

EXCERPT: But while they found plenty of female octopuses, none of them were large enough. “Even if we put a 30- or 45-pound female out there, there’s a chance he would see her as food,” Carpenter explained. “We were looking for an animal of at least 60, 65 pounds.”

If they had found a good match, there would still be no guarantee that the two animals would hit it off. “A blind date is a blind date, and you never know how it’s going to go,” Carpenter said.

Some years, the two creatures hardly notice each other. Other years they embrace within minutes, arms intertwined, skin flushed as the male sticks his “special arm” (seriously, it’s called a hectocotylus) into what looks like the female’s head (but is actually her mantle, where her organs are). “Sometimes they’ll ‘hang out’ with each other for an hour,” Carpenter said. “Sometimes it’s 12 hours.”

The orcas are starving

This feature article by David Neiwert looks at how dwindling salmon resources are impacting the Southern Resident orcas, an endangered group of whales that call the Puget Sound region home. The region's dams are partially blamed for this condition, and the article details the arguments against them. This article became more timely this month, when another orca was found dead of malnutrition.

EXCERPT: There is an established and powerful correlation between salmon abundance and orca populations. The uptick in Chinook runs of the past few years on the Columbia/Lower Snake have been linked to the recent orca baby boom.

The spike in salmon numbers is largely attributed to good ocean conditions for the past 12 years, and to some degree to a federal court ruling requiring the Bonneville Power Administration to spill water over Columbia and lower Snake River dams at key times of the year to aid migrating salmon smolt in their downstream journey. But it is the continuing presence of those same four dams — Ice Harbor, Lower Monumental, Little Goose, and Lower Granite, located on the Snake between the Tri-Cities of Pasco, Kennewick, and Richland and Lewiston, Idaho — that may ultimately doom the Southern Resident orca population.

In January, Seattle Humane announced a "chubby cats" promotion, in which the heavier the cat you adopted, the more they'd discount their adoption fee of $25. Crosscut's Audience Engagement Coordinator Cambria Roth discussed the implications of this with Seattle Humane spokesperson Laura Follis.

EXCERPT: We have a certain number of “full-figured felines” and that is a steady situation. This is a bit of tongue and cheek promotion, but it is surrounding a serious topic. We are sort of tapping into other people who have their new years resolutions, and looking for a workout buddy. Well, you can work out together!

Q: So people, for new year’s resolutions, you envision them taking cats for walks?

Yeah, I mean taking a cat for a walk isn’t as easy as taking a dog for a walk, so not all cats are up for it. It’s some work getting them used to a harness and a leash, but it is a great option for the cat if they go for it. There is plenty of exercise an indoor cat can get, and they don’t have to go outside for that. There are everyday things you can do.

Q: Is this “fat shaming” cats?

No, not at all. It’s accepting cats, they come in all shapes and sizes and that is totally true…. I think absolutely we aren’t doing that. What we are saying is, make sure you talk to your health professional and check to make sure your cat is a healthy weight. This is just an awareness campaign to get people thinking about it.

The cutest local animal videos of 2015, reviewed by a nihilist

Toward the end of 2015, we reached out to the region's zoos, seeing if they'd like to contribute a quick run-down of their favorite animal videos of the year. They declined, instead simply pointing us to their YouTube pages and telling us to use whatever we want.

Because he has a strange sense of humor, outgoing editor Drew Atkins then decided to take the article in a completely different direction, picking a few and reviewing them up from the perspective of a "Professor of Nihilistic Philosophy from the University of Berlin." Rather than excerpt it, Atkins has opted to repeat this approach for 2016, as an excuse to both watch a bunch of these videos and impose some of the dark stuff he reads on the general population. Happy holidays!

At the conclusion of our latest cycle around the sun — which will explode one day, a comforting thought — let us consider how the humans of Puget Sound are treating their betters (i.e. every other creature). Does massaging this arthritic bunny serve any real benefit, in the end? Probably not. But then, mankind does things without any conscious idea of what it really wants or under what conditions it will stop being unhappy. In fact, mankind largely does things that seem to make it more unhappy, and calls that progress. We might as well serve the bunny, and give it acupuncture.

This muskox was abandoned by its mother. It happens all the time. Think about that.

Here we have two honest things: bears and bubbles. Like fireworks, bubbles are so patently just an ephemeral spurt of beauty, of which in a moment nothing more is left. Surely, this is the best we can hope for from our short time here. Leonardo understood this. He deliberately made “The Last Supper” perishable. In watching these small bits of beauty blown by bears — nature’s purest killing machines — we learn how to cope with this existence’s mindless brutality. This bubble-blowing bear presents us a path.

Skip to 22 seconds into this video, and watch a polar bear unsuccessfully attempt to devour a human child. The child’s parent simply laughs, as the bear is halted by an invisible barrier, which must strike it as a supreme injustice, an example of one player cheating in the game. “You’re a nut,” the parent says to its child, in remarkably good spirits after a bear attack. But it’s the world that is nuts. The child has cheated, mankind has cheated, and this polar bear does not belong anywhere within a thousand miles of the Pacific Northwest. We are surrounded by pure and outrageous nonsense, more by the day.

If it hasn’t become apparent, I’ve decided to focus on bear videos for the rest of this column.

That human life must be some kind of mistake is sufficiently proved by the simple observation that people are a compound of needs which are hard to satisfy; that their satisfaction achieves nothing but a painless condition that leads to boredom; and that boredom is a direct proof that existence is in itself valueless, for boredom is nothing other than the sensation of the emptiness of existence.

This bear will never feel boredom. Just look at that bear. This video isn't from a Pacific Northwestern zoo, but no matter. WHAT A GOOD BEAR.

In closing, there can be no argument that humans are a defective animal. We are the only creatures to follow unstable leaders, as famed dog trainer Cesar Milan points out, and our politics increasingly prove. We’re deeply out of balance with nature. With few exceptions, we’re out of balance with ourselves. As the world descends deeper into chaos in 2017 — a seeming inevitability — let us learn something from our region’s imprisoned animals in the new year.

Note: For the above, the author both impersonated and quoted the writings of William Faulkner, Stanislav Grof, Iris Murdoch, Thomas Ligotti, Arthur Schopenhauer, Norman O. Brown, and Gerhard Vowinckel.