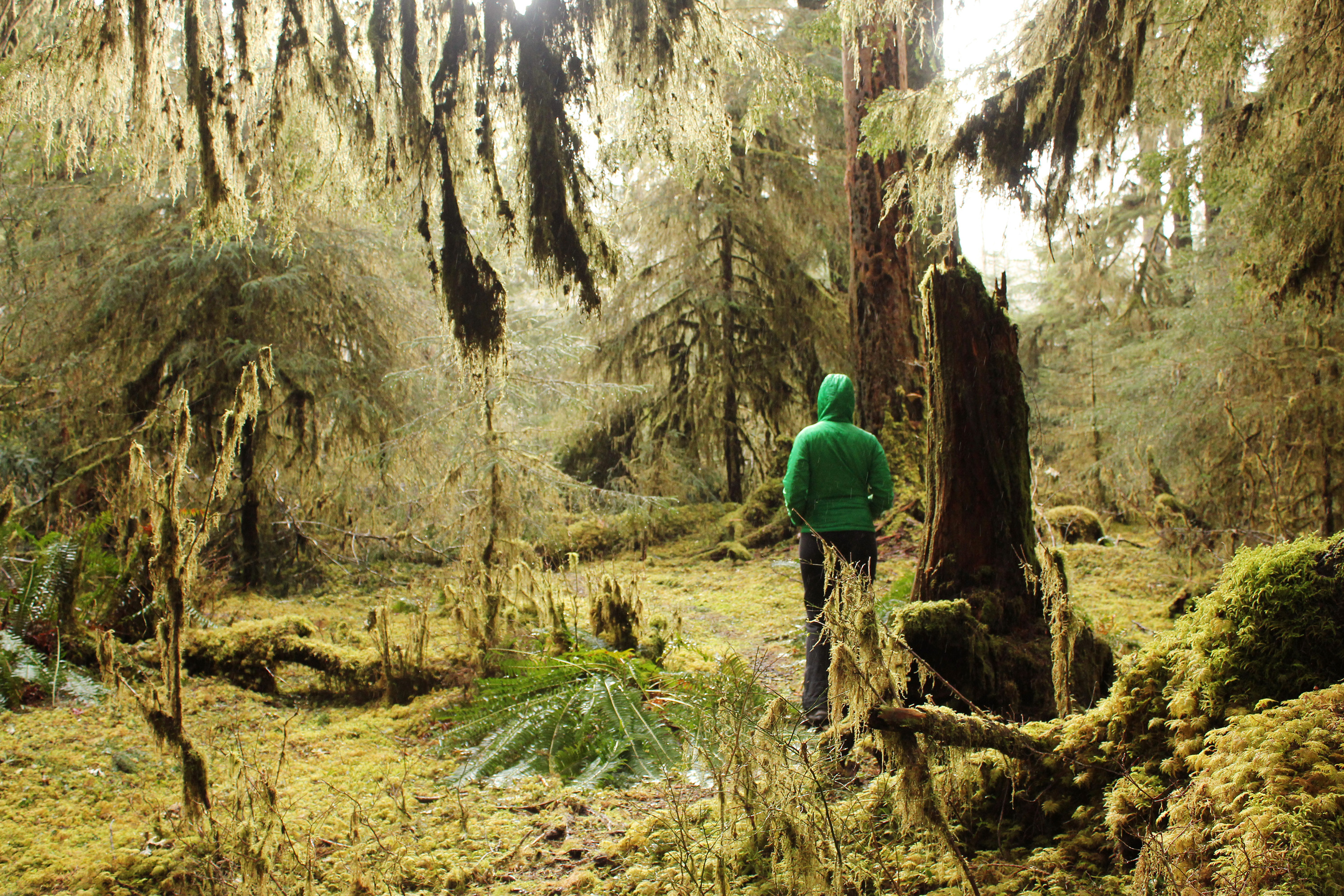 I’m sitting with my back against a rotting, red log, my chin resting on my knees as I hug them in toward my chest.

I close my eyes, and listen. There’s the drip, drip, drip of rain hitting the hood of my jacket. There’s the sound of leaves rustling as I fidget, trying to find a more comfortable position without sitting on the wet moss and soaking my pants. There’s my own breath, which suddenly seems like an absurdly loud nuisance I can’t escape. In fact, I feel like I’m messing up the very thing I came out here to find: silence.

I’m in the Hoh Rainforest in Olympic National Park, at a spot that has been christened the “quietest square inch in the United States” by Gordon Hempton, an acoustic ecologist who spent more than three decades traveling the globe and making sound records of pristine environments. These days, however, he is more concerned with protecting these soundscapes than in documenting them — starting with the very patch of forest where I’m sitting.

I got directions to the site from Hempton himself, after driving out from Seattle with my two friends Amy and Sarah to visit him in his yurt near the town Joyce. Walking into his home, I noticed the tidiness of the place, the decorations against the white canvas (a drum in the style of a native northwest tribe, house plants), the books on the shelves (Mark Twain, Yann Martel, John Muir). But Hempton quickly redirected our attention.

“Let’s take a moment and just listen to my place,” he said. And so we did.

But after noticing some faint pitter-patter against the roof, my own quiet was quickly overtaken by my wandering mind, distracted by what my first interview question should be, where we could camp that night, the need to suppress a giggle. I’m sorry, but I was trying to listen to a yurt! Sometimes life is just delightfully wacky.

When Hempton broke the pause, it was clear he had been much more successful in the exercise. “See, when we listen to rain in a yurt structure, how you can get the information coming in,” he said. “After a few minutes, I really feel the texture of the cloud as well. It’s not just rain starting, but it will begin to pulsate.”

I’d totally missed the clouds. But then, Hempton has more practice at this than I do.

Hempton’s obsession with sound and silence began in the fall of 1980, when he was 27 (coincidentally, the same age I am now). En route from Seattle to Madison, Wisconsin, to begin a graduate program in botany, he pulled off I-90 and lay his bedroll in a cornfield for the night. Then, as he describes in the book One Square Inch of Silence, he had what he now calls an epiphany:

Hands behind my head and ready for a deep rest, I lay between two rows of stubby, shorn stalks. I heard a wonderful, layered chorus of chanting crickets and began to smell the dampness of an approaching storm. There, on the prairie, the thunder rolled in from far away, signaling rain long before it arrived. Again and again this thunder boomed and echoed, growing ever-louder — magnificent, deep, primordial, soul-shaking sounds. I’d never heard thunder like this before.

Hours later and thoroughly soaked, I thought, “How could I be 27 years old and never truly have listened before?”

The difference between hearing and listening, and the discovery of how to really, wholly lend one’s ear, are revelations Hempton wishes more people could have. “After three days or so in the Hoh Valley or in Olympic Park, you find that all the chatter of the modern world that snuck aboard your backpack with you … loses relevance,” he told us, with sermon-like delivery. “It’s no longer important. What’s important is the beauty of nature.”

But the quiet spaces — defined not by their lack of sound, which could include birdsong and wind rustling leaves, but their lack of manmade noise —are quickly disappearing. By some estimates, noise pollution affects more than 88 percent of the contiguous U.S.

According to Hempton, the slice of forest I visited has less noise pollution than any other spot in the American wilderness, which is why he chose it as the “One Square Inch of Silence” he wants to sonically protect, with a law that would prohibit air traffic overhead.

The notion of protecting silence (which we typically think of as the absence of a thing, rather than a thing itself, like darkness) is still relatively obscure. So part of his plan is to get people to see — er, hear — what it’s all about for themselves. Which is why Hempton makes the “One Square Inch” coordinates publically available on his website, and actively encourages people to visit.

“We don’t have an environmental crisis at all,” he said. “What we have is a spiritual crisis. And our environment is tanking because of the way we’re living and our relationship to the world that supports us. It’s really about falling back in love with the earth.”