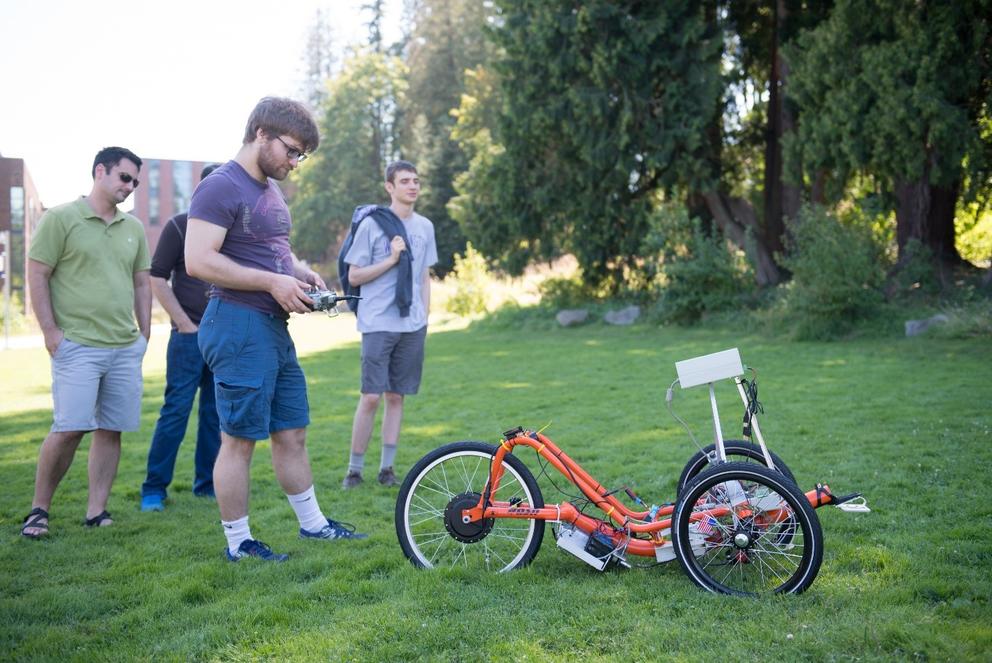 It’s become abundantly clear that we’re hurtling toward a future in which cars drive themselves. Five or ten years hence, we’ll be able to sit back, sip a latte and post selfies on Instagram as we're whisked off to the office (oh, right). But one local inventor hasn’t lost hope for an older technology. He imagines a future full of bikes — bikes that, yes, also drive you to work, no hands or sense of direction required.

“I’m trying to shift the talk about self-driving cars to self-driving bicycles and making sure bicycles are part of the automation equation,” says Tyler Folsom, an affiliate professor at UW Bothell.

No, this isn’t another April Fool’s prank come early. In fact, Folsom’s project recently got a fairly big boost, winning a $75,000 grant from Amazon Catalyst, a joint program between Amazon and the University of Washington’s CoMotion innovation hub.

So what exactly would a self-driving bike look like — and what, exactly, is the point?

Folsom’s set of wheels is actually less a bike than a recumbent trike, minus the pedals: It’s pretty much a robot go-kart. It would have a manual mode that would probably be operated via a joystick, and an automatic, self-driving mode that would kick in at the flick of a switch. Think something along the lines of an “e-bike that steers itself in cruise control,” Folsom tells Crosscut.

The nut of Folsom’s scheme — how he thinks it could fit in with a new roadscape full of Google cars — relies on having a network of special lanes. The trikes would only go into the auto mode when in one of these lanes, which could be shared with other self-driving vehicles (but not with human-driven bikes or cars). Others have proposed specially designated lanes for self-driving cars for long distances on the highway, like from Seattle to Vancouver, but Folsom says that’s the wrong idea.

“The right place to put the lane is in the city,” he says. His vision is that the trikes and their designated lanes could be a fast, efficient way for urbanites to get around day-to-day.

But if there’s no pedaling involved and they’re sharing the lanes with cars … isn’t a trike really just a little car itself? And wouldn't the three-wheelers be prone, at the very least, to the spite of a certain Mr. Bean, or worse, to being mangled by other, larger vehicles?

Folsom confirms “there’s really no distinction between these bikes and robot cars.” But he still imagines a niche for the trikes in maximizing efficiency and affordability — and if all the other cars are self-driving, anyway, collisions will be reduced. “These bikes give a very similar performance to automated cars, but at a lower cost and less impact to the environment,” he says.

The reduced cost has a lot to do with the fact that companies that are developing self-driving cars want them to be able to zig and zag to navigate whatever the road throws at them. They want “a car that will drive in any crazy circumstances with any crazy drivers,” Folsom says. This is necessary if you want to take a self-driving car out for a spin on the roads as they are today, but Folsom is thinking bigger picture — a sort of redesign in urban transportation infrastructure.

“Our route is to keep the technology simple by simplifying the environment,” he says.

In other words, take away the erratic traffic, and developing self-driving vehicles suddenly becomes a lot easier to do. That simplified environment would be the self-driving vehicle lanes: think something that’s a little closer to an elevator driving through a shaft, or a tram traveling along its track, than a car down I-5.

Having designated lanes would make self-driving vehicles like Folsom’s trike much cheaper to engineer. The trike’s system runs on Arduinos, a type of microprocessor that is less powerful than a smartphone. It also incorporates GPS to program the navigation, and sonar to detect obstacles. The goal, Folsom says, is to keep the production costs under $10,000.

Which is, of course, a lot money for a trike — but still cheaper than a Smart Car. Which starts to make the trikes seem viable as a public transit alternative: a kind of hybrid between Car2Go, street cars and bike share. Folsom’s trike will be designed to sustain a speed of 30 miles per hour, which is about 5 miles per hour faster than cars traveling down portions of I-5 in Seattle during rush hour, or taking the light rail from downtown to the airport (including stops).

A big benefit of modeling the thing more after a bike than a car, even if that’s really just a matter of semantics, is that lighter vehicles are more efficient. Folsom says his bike would use a tenth of the energy per person compared to a five-person carpool or even the light rail, mostly because the trikes are so much lighter, and thus require far less energy to overcome inertia in order to get them to move.

“Most of your energy consumption goes into moving a vehicle, rather than the person,” he explains. “So I was looking at how you can drastically downsize the vehicle.”

Of course, this whole scheme would require the city to buy into the plan, in order to develop the bike lanes in the first place — which, given that we just passed a $50 billion transportation package, might not happen in Seattle anytime soon. “This would've been an alternative to ST3,” Folsom says. “So I expect to be marketing this in other cities.” He feels particularly hopeful about the possibilities in China.

But there are parts of Folsom’s scheme that we can start using here and now, before the next big transportation revolution hits us: Integrating bikes and public transportation is still often the fastest, most energy efficient option for getting around. Even if it means we have to pedal our own legs and do our own steering.