Can Huskies football shake its scandal-plagued past? 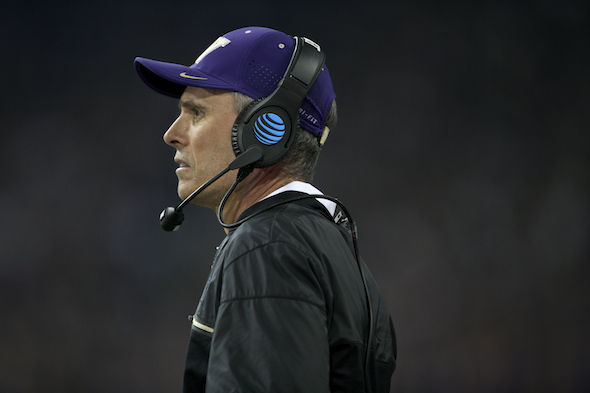 SANTA CLARA, CA. – The toughest part of coach Chris Petersen’s task is not devising a plan for his fourth-ranked Washington Huskies to beat eighth-ranked Colorado in the Pac-12 Conference championship Friday.

Nor will it be figuring out how to bring asunder the colossus of No. 1 Alabama, the likely foe should the Huskies succeed Friday and advance for the first time to the College Football Playoffs, to be held Dec. 31 in Atlanta.

The heaviest lift for Petersen will be managing success. In big-time college sports, being the best can bring the worst.

The pressurized, often ruthless world of giant football programs is where corners are made to be cut, bad behaviors are indulged and money is rigorously denied student performers while lavished upon their overlords and institutions. Call them banana republics with good health care.

Petersen himself makes $3.6 million annually, making him tops in the Pac-12 and the highest paid state employee in Washington. This, to run a program that pulls in the lion's share of more than $100 million in annual revenue for the UW athletic department.

The perils that follow success with UW football have a sordid history. The most recent coaches who reached pinnacles similar to Petersen's aspiration, Don James in 1993 and  Rick Neuheisel in 2000, were subsequently engulfed in NCAA scandal and controversy that cost them their jobs and the university much credibility and many dollars.

Those who have been around Petersen in his three years at Montlake say that he is as fussy about rules as he is with pass routes. He is said to be honest and direct in his recruiting practices, and willing to reprimand and dismiss top players for conduct violations.

And because he shuns public oratory and self-aggrandizement, he is highly unlikely to talk his way out of the job.

“He’s just a real clean-cut looking guy; he has a stately air," Leach told reporters before the Apple Cup last week. "There’s several other guys in our conference of Mormon background, and we agree if there’s a bishop in the conference, it would be him.”

If Petersen is the Bishop, James (three-time national coach of the year, with a record of 178–76–3 from 1975 to 1992) would have been the Pope. The two share many characteristics, including success. But the virtues didn’t prevent the unscrupulous under James' charge from doing deeds that broke NCAA rules on amateurism. Even if the rules-breaking seemed petty to some, it was only because those observers are not steeped in the traditional plantation mentality of the NCAA.

After three consecutive Rose Bowl appearances,  James resigned in protest 12 days before the start of the 1993 season rather than accept sanctions resulting from Pac-10, NCAA and newspaper investigations into recruiting practices. To their dying days, James' defenders will say he was a victim of jealous rivals, or a Pac-10 vendetta, or a university president who feared him, or punishments that didn't fit the misdeeds. But there's no dispute that the resignation and sanctions knocked back the program for years.

Seven years later, light seemed to have penetrated the Dawg darkness when the Huskies returned to the Rose Bowl on Jan. 1, 2001 under Neuheisel, the glib, hip, singer-songwriter who connected with recruits in a fresh way. But by 2002, Neuheisel had been fired for his participation in, and subsequent lying about, basketball-tourney betting pools disallowed by NCAA rules.

That didn’t stop Neuheisel from suing over wrongful termination – and winning. Turned out the UW didn’t follow its own rules and the NCAA didn’t even know its own rules. The blunderings cost the UW and NCAA a $4.7 million settlement that was reached mid-trial.

But that messiness paled compared to the disclosure years later of the misdeeds done by players on the 2000 team and covered up by coaches with help from Seattle police and the prosecutor's office.

Neuheisel was long gone when the Seattle Times in 2007 published a five-part series by reporters Ken Armstrong and Nick Perry that detailed the crimes and (lack of) punishment. In 2010, the stories came out in a book: “Scoreboard Baby: A Story of College Football, Crime and Complicity.”

The book focuses on five players, including former Seahawks No. 1 draft pick Jerramy Stevens, whose litany of chances given and liberties taken could be its own true-crime pulp saga.

None of this history, of course, belongs to Petersen, who, like Seahawks coach Pete Carroll, preaches to his players to live in the moment instead of lamenting the past or fearing the future. Good tactic for an athlete, not so good for a community twice scorched by reckless college football lust.

The history does belong to the University of Washington, which hopes fervently that it has finally made the right choice of a coach who can navigate the perils.

Petersen this week blurted something that may tell more than he intended about that sort of thing.

He was talking Monday about a friend, Mark Helfrich, the head coach at Oregon, where the two were once assistant coaches together. Petersen was hopeful that administrators would support a coach who had the misfortune to go 4-8 this season, which lowered his four-year record to 37-16.

"I mean, money ruins everything, right? It does," he told reporters. "With the money comes the expectations. If it’s not right all the time, in a really fast, quick level … to have an administration hang in with somebody who you think is doing it the right way is impressive and inspiring. That goes against everything else that’s out there.”

A day later, administrators fired Helfrich. And will pay him a buy-out of $11.6 million to not coach the Ducks. So much for hanging in.

The expectations, exposure and revenue that success generates in big time college sports is astounding. There really is no "going against it." All that can be done is to slow the fire.

That's Petersen's challenge, already underway regardless of Friday night's game outcome: Try to manage his imminent success for as long as he can before it consumes him, as it has his predecessors and friends.