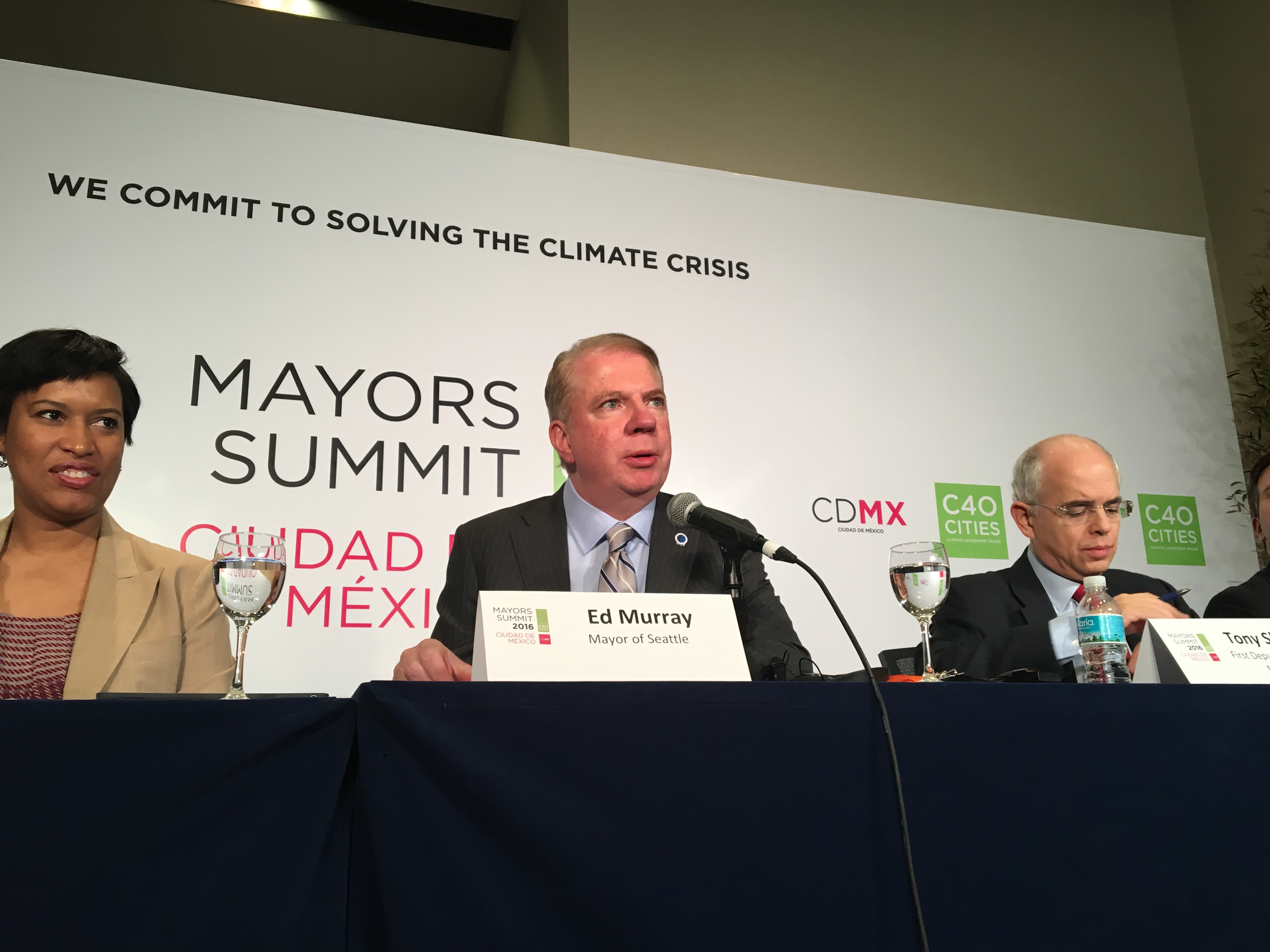 MEXICO CITY — Continuing his defiant tone following the presidential election, Mayor Ed Murray insisted that Seattle will continue to press forward on climate change whatever the policies of the Trump administration. On his first official trip to Mexico as mayor, Murray spoke alongside other U.S. mayors at an international climate change summit in the Mexican capital, where he also signed a cooperation agreement with Mexico City.

“We will continue to work with cities around the world on this very important issue,” Murray said alongside the mayors of Austin, Phoenix, Portland, and Washington, D.C. at the C40 Mayors Summit. “We’re not naïve about the political environment that we face going forward. But we actually believe that we can offer leadership. We’re not going to step back.”

Seattle is a signatory, along with 41 other cities, of an open letter to President-elect Donald Trump urging him not to withdraw from the Paris Agreement, last year’s United Nations global accord on climate change. During the campaign, the Environmental Protection Agency was a frequent target of Trump’s ire, and Trump has threatened to pull out of the Paris Agreement, or at least not fulfill the U.S.’s pledges.

The letter also declares that cities will forge ahead with individual actions in order to ensure that the U.S. meets its climate change targets.

The specter of a Trump presidency loomed over much of the Mexico City summit. At this year’s edition of the biennial gathering, 40 mayors — including the leaders of Cape Town, Paris, Rio de Janeiro, Seoul, Sydney and Vancouver — convened to celebrate the success of the Paris Agreement, and to plan the next steps, notably around access to financing. According to a report by C40, a global network of 90 major world cities who share ideas and pledge joint commitments on climate change, U.S. cities can account for one-third of the emissions reductions necessary to hit the country’s climate goal under the Paris Agreement by 2025.

C40 estimates that cities worldwide will need to invest $375 billion over the next four years in low-carbon infrastructure in order to achieve the agreement’s climate goals.

While Trump’s election sent shock waves through the first official follow-up to the Paris Agreement, which took place last month in Marrakesh, former New York City Mayor Michael Bloomberg cautioned that the jury is still out on the president-elect. “The incoming administration has yet to draft its policies,” he said. “In all fairness, it hasn’t even taken office yet.”

But Bloomberg, who now serves as the U.N. Special Envoy on Cities and Climate Change, was nonplussed by the prospect of federal retrenchment on climate change at the C40 Conference. “If our federal government does less than it has been doing in the last eight years, it would be a big surprise because they haven’t been doing much of anything,” he said.

Murray echoed this sentiment. “The federal government has been receding support for cities for decades,” he told Crosscut. Murray conceded that the federal share of the city budget is “no small number” and that the ST3 light rail package, which voters approved on Election Day, is predicated on a 9 percent federal match in funding that could now be in jeopardy.

Under the new administration, the federal government could take steps to increase fossil fuel production, whether by stimulating the coal industry — as candidate Trump promised — or selling oil and natural gas leases on federal land. But as recent pipeline battles from Keystone XL to the Dakota Access Pipeline at Standing Rock have shown, fossil fuels need conduits.

The Port of Seattle may face that test — at the summit, Portland Mayor Charlie Hales trumpeted his city’s resolution to ban new fossil fuel infrastructure in the city, effectively shutting down the Columbia River port to any such exports. In Seattle’s case, the port is an independent jurisdiction, which prompted Murray to argue, “It depends on those people who elect port commissioners stepping up and pressuring the port commissioners.”

Whatever happens over the next four years, Bloomberg expressed confidence that the U.S. remains on the right path precisely because of the local action taken in cities like Seattle, which made a commitment last year in Paris to become carbon neutral by 2050.

“America has made much progress on reducing greenhouse gases and pollutants, but it has come from the cities, not from our federal government,” Bloomberg said. “I’m confident that we are going to meet the goals that we set in Paris because the work that mayors are leading.”

Seattle is a longtime member in good standing of C40 Cities, but the biennial summit’s timing after the November election — during which Mexico was frequently cast as a villain by the president-elect — provided an extra impetus to attend.

Murray met Mexico City Mayor Miguel Ángel Mancera in October at a conference in Miami, where the two found much in common: innovative tech sectors, large research universities, and socially liberal attitudes. Mexico City is also one of the few places in the country with marriage equality.

The two mayors sought to forge closer ties that were formalized this week with a memorandum of understanding.

One commonality: Amazon. Mexico City, the largest city in North America, is home to Amazon’s Latin American offices. Murray toured the office on his visit, where he met a number of Latin American employees who have spent time at the company’s Seattle HQ, and former Seattleites who have relocated to Mexico City.

“There are incredible opportunities on both sides to grow connections,” Murray told Crosscut.

He cited customer service innovations coming out of Amazon that could help streamline city government in both cities, as well as some tips from Mexico City’s successful bike share program that he hopes to bring home as Seattle plans to shut down — and eventually reboot — Pronto.

Ultimately, Murray intends to use his soft power as mayor to encourage a change in perceptions after the Trump campaign effectively demonized our neighbor to the south.

“One of the challenges we have in America right now, especially after this election, when people think of ‘Mexico’ or ‘Mexican’, it is not a good image,” he said. “One of the things I think we can do by building this relationship with Mexico City is to absolutely educate people about the dynamic culture and economy down here.”

The Mexican metropolis has a thriving music scene, which some artists here have compared to Seattle in the early ’90s. It’s also a world-renown cultural destination. Across the elegant Alameda Park from the summit sits a museum housing one of muralist Diego Rivera’s most famous pieces.

Last night’s annual C40 Cities Awards — where Portland took home a prize (Seattle was a runner-up in 2014) — were handed out at the Palace of Mines, considered Latin America’s masterpiece of neoclassical architecture. Sounders fans might also know of the city as home to Club America, which beat the possible MLS Cup champions earlier this year in an international tournament.

Murray hopes that closer ties will be more than symbolic, with city staff and private sector talent moving between the two cities, despite what might happen with U.S.-Mexican relations.

“Others can talk about building walls, but we believe we can build bridges to go over those walls,” he said.