Police reform in 2016: A look back at Seattle's efforts 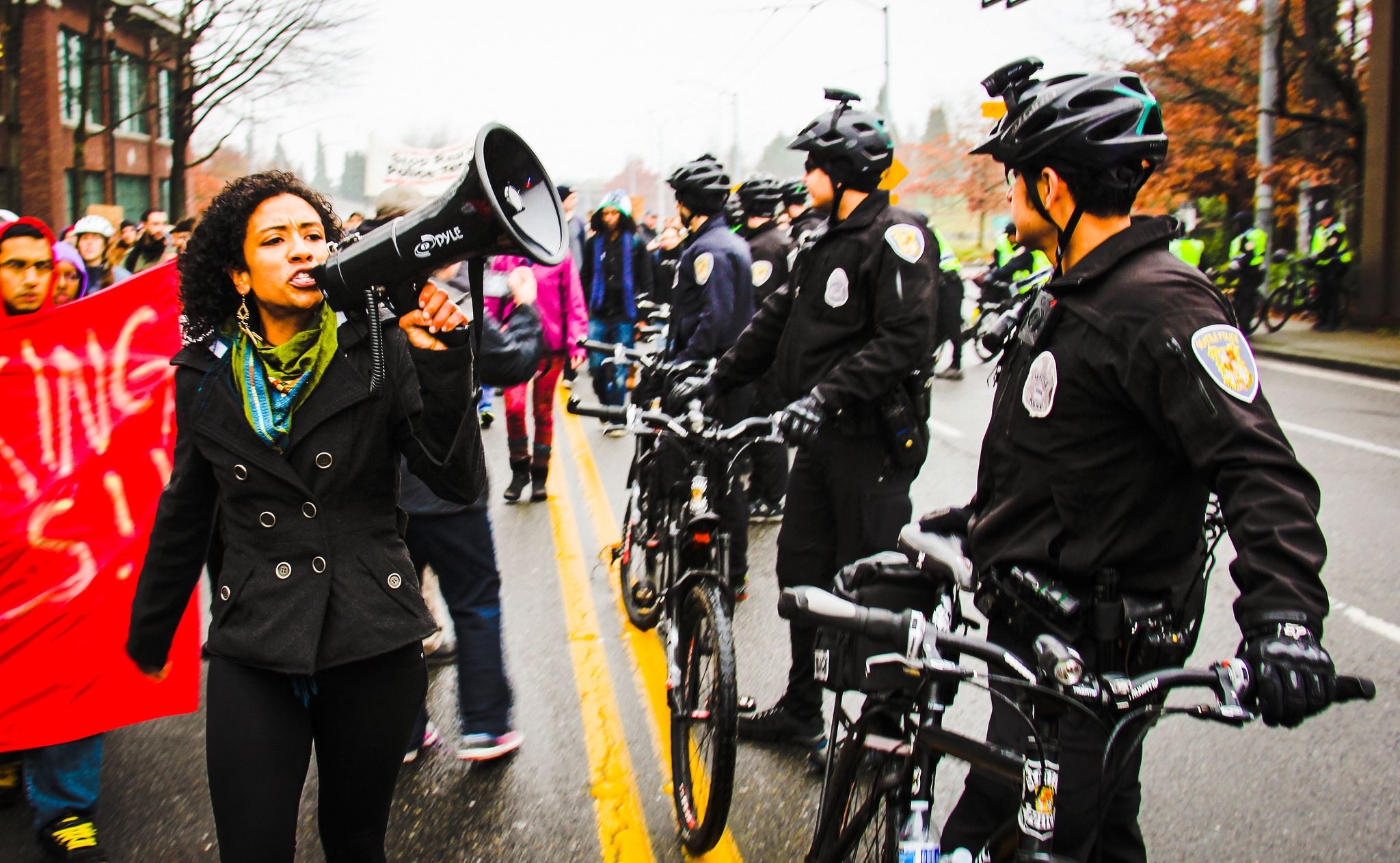 A protest against police brutality last year in the wake in the wake of deaths in New York and Missouri.

When Seattle Police Chief Kathleen O’Toole sat with Michelle Obama at President Obama’s final State of the Union address last January, she set a bar for herself, her department and the City of Seattle. She’d been invited there as an example of what federal reform of local police departments could achieve. In her invitation, she was praised for ushering in a new era of community policing.

And why not? Since the city and the Department of Justice came to a settlement agreement in 2012, assessments have been increasingly positive of the department. Use of force reporting has been improving, de-escalation training has become the rule, not the exception, and disciplinary processes have in theory become more fair and thorough.

But at the time she sat in the First Lady’s box, Seattle’s African-American population still harbored deep distrust of the officers in blue. And if those with the darkest history and relationship with sworn officers still don’t trust them, is reform really succeeding?

Nationally, 2016 was among the worst years for the relationship between law enforcement and African-American communities. The shooting of black men in Minnesota, Louisiana and elsewhere, coupled with the assassination of officers in Dallas, often created the head-scratching binary that you either thought black lives or “blue” lives mattered.

In Seattle, the march toward a reformed police department was a more behind-closed-doors type of drama, although the city did experience its own turmoil after the shooting of an African American man, Che Taylor. But the ultimate reality of police reform in Seattle is it’s slower and quieter than many might expect, marked not by sweeping declarations or exposition of deep-seated corruption, but instead by negotiations over statutes of limitation or private cops or secondary employment. And from that perspective, the grandeur of a state of the union address never matched the slog of local reform.

There were two primary paths toward change this year: One was a legislative package of accountability reforms that many hoped would have long ago become reality. The other was an initiative to change Washington’s law, among the most restrictive in the country, to make it easier to prosecute police officers who use deadly force.

There were, of course, other battles, like the North Precinct police station, the specifics around body cameras, internal technological issues and what parts of the department internal workings are public record. But the accountability package and the initiative represented the broadest strokes of systemic change.

The initiative to change Washington’s law — which says officers may only be prosecuted if they acted in “malice” and not in “good faith” — has been a priority for reform advocates for years. But it gained momentum in the aftermath of Mr. Taylor’s death, when his brother Andre became the de facto face of the effort. The initiative avenue, known as I-873, ran parallel to efforts in Olympia.

It appears that I-873 will not get the signatures it needs to make next year’s ballot. But the organizers hope that the momentum is enough to spur Olympia legislators into action next year.

It literally took years to get this proposal before the judge. On several occasions, parties thought they were close, only to be told to take a step back or that they were in violation of the words of the settlement agreement.

And yet, the reforms still have a tough road ahead. The judge overseeing the DOJ process needs to first sign off on the proposal in accordance with the settlement agreement, before it then goes to the Seattle City Council to be tweaked and passed into law. Meanwhile, the police unions want to bargain some of the measures. That opens up a head-spinning question of what takes priority: federal reforms or state mandated collective bargaining rights. Some of that may get cleared up on Jan. 4 at a status conference with the judge.

Since the State of the Union, trust in the department among African Americans has improved. The monitor overseeing the reforms has issued several positive reports and diversity has increased.

Still, the election of Donald Trump as president has made the completion of the settlement agreement a little hazier. Some wonder if the time and effort will have been worth it. City Attorney Pete Holmes certainly does, repeatedly arguing that DOJ can succeed where past efforts have not.

But as CPC co-chair Lisa Daugaard told Crosscut recently, "In the end, formal accountability structures are a small part of how things change and in the end they may be irrelevant. Because if people want to change and they give their energy and creativity to change then you don’t have to make them. Then you’ve got the whole organization working for you."