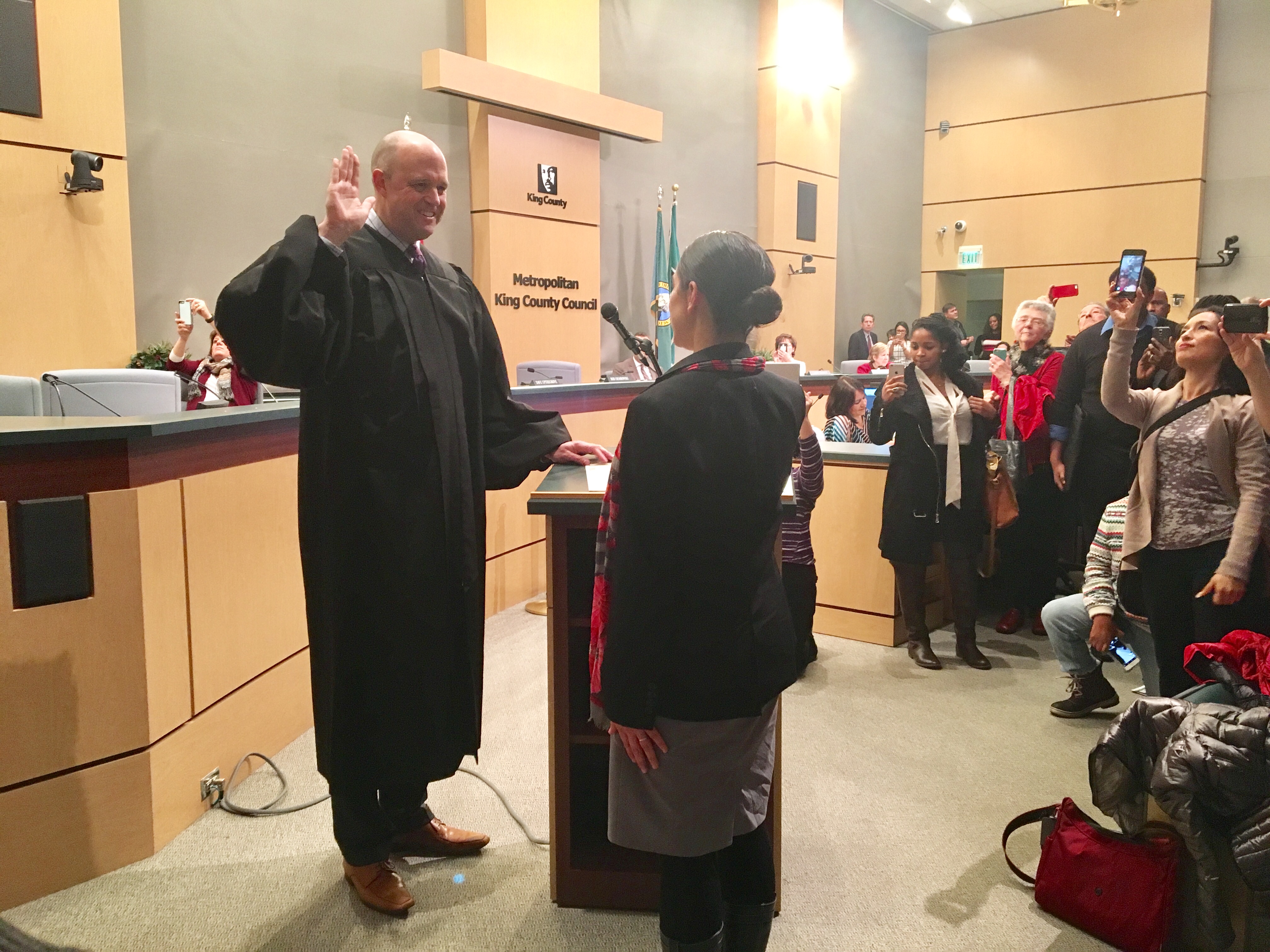 A judge swore Saldaña in after King County Council confirmed her appointment.

Rebecca Saldaña had been sworn in to represent South Seattle in the Washington State Legislature for only a matter of minutes, but she was already thinking about her next move.

As the doors to the King County Courthouse elevator closed, Saldaña and her team screamed in celebration; she had been picked to finish the term of outgoing state Senator Pramila Jayapal, who was elected to Congress in November. Then, they were scheming.

“He is going to raise so much money by next year,” one woman said. “Who?” another asked. “Rory,” said the first, referring to Rory O’Sullivan, housing lawyer and current chair of the 37th District Democrats, who was passed over for the nomination but could run against Saldaña next fall. “We have to start [fundraising] now."

The group apparently realized that their candidate had only squeaked through. The 37th Legislative District Democrats had named O'Sullivan their top pick for the spot. Saldaña was their second choice, while political consultant Shasti Conrad was third.

Usually, the legislative district party recommends three names to the county council, and the council chooses whoever got the most votes — but not this time. When the council voted whether to appoint O’Sullivan, only Rod Dembowski, Joe McDermott and Jeanne Kohl-Welles voted yes. Then the council unanimously approved Saldaña.

A few councilmembers acknowledged there were few policy differences between O’Sullivan and Saldaña, but cited a lack of diversity in the Washington State Legislature as a driving force behind their decision. According to her current work biography, Saldaña is "Chicana, born of Mexican and Germanic roots."

“For me, it really came down to whether to go with the majority vote of PCOs [Precinct Committee Officers] in the 37th District or to look beyond that and look at the significant support from PCOs for the top two candidates,” Councilmember Claudia Balducci said. “Also, weighing representation and diversity … it’s an increasingly diverse county and the number of people who come to the table and bring that experience and point-of-view in our Legislature is woefully lacking.”

Councilmember Larry Gossett pointed out that 92 percent of the Legislature is white and that with Jayapal leaving, it meant there would be no women of color and their unique perspectives in the Senate.

O’Sullivan himself said the issue couldn’t be ignored. “The reason I’m here today is the support I’ve received from women of color who encouraged me to run. … One of the most important things is to have a representative that will listen, has earn the trust of the community and will take equity into consideration when looking at legislation.”

Saldaña’s background echoes Jayapal’s in that she’s been heavily involved in community organizing and activism. After graduating from Seattle University, she became an organizer at a farm worker’s union in Oregon called Pineros y Campesinos Unidos del Noroeste (PCUN). From there, she organized for United Farm Workers of America and SEIU Local 6.

Before her appointment, she was the executive director of Puget Sound Sage, an organization led mostly by people of color that advocates for policy change. The nonprofit uses research, policy analysis and community organizing to bring about change through campaigns that vary from housing advocacy to environmental justice.

The 37th district runs from Beacon Hill to Renton and is a cultural melting pot. It’s one of few majority-minority districts in Washington, and last week, its Democratic Central Committee  voted in favor of O’Sullivan by only 11 votes.

In her acceptance speech Saldaña said, “I want to thank all of the PCOs and residents of the 37th district for their commitment to inclusion and dignity, and I hope that through this process that was an appointment, that I can earn your vote next year to continue to serve to ensure our laws are bending towards justice.”

Before the council’s final decision to appoint Saldaña, rather than O’Sullivan, Councilmember Kathy Lambert said, “I think there is confusion as to what the process is. The job of the PCOs is to take however many people are in the district and narrow it down to three picks, and as far as reading of the law, we get to choose any of the three.”

But there are likely to be a few peeved 37th District PCOs out there after this vote.