'Michelle Obama ain’t the only fantastic woman of color' 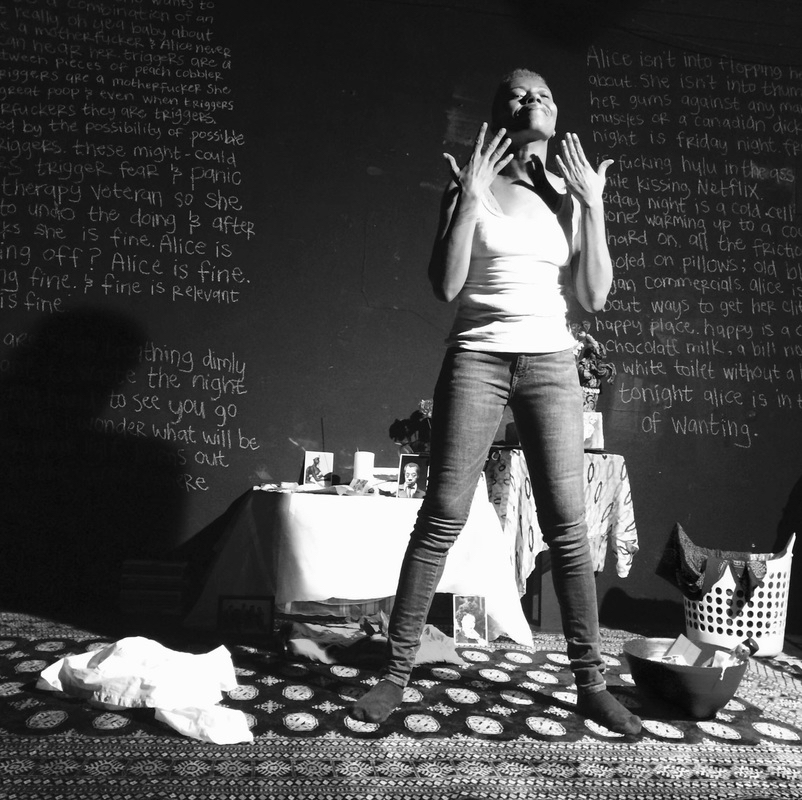 Anastascia Tolbert in character for "9 Ounces" during a performance at Hugo House. Gay City will present the show this weekend.

A disembodied yell of “No! No! No!” rings out from the gallery. I enter timidly, thinking I might be interrupting writer and artist Anastacia Renee Tolbert in the middle of performing her one woman play 9 Ounces. But there is no one there.

Still, Tolbert’s presence or rather her character, Alice Metropolis, dominates the one-room gallery known as The Alice through three TV screens and a collection of artifacts from the set of the show. On one screen, Alice buttons and unbuttons a crisp white shirt her nervous face in contrast with her playful, sing-songy voice.  “Cancer are you still there?” she asks, performing a breast check. On another screen Alice paces and smokes. On the third, her rage and grief are nearly unbearable as she screams “No” again and again, before the video goes mute.

The Alice Gallery is nestled in a hipster nook of Georgetown. Four artists — Julie Alexander, Julia Freeman, Molly Mac and S. Surface — take turns curating the space. The Alice is avant-garde and immersive, an incubator for high concept art. “I am consistently interested in nonlinear storytelling and in inquiry,” says Molly Mac, the artist who invited Tolbert to bring Alice to The Alice.

As I entered the stark space, all white walls and black wood floors, an altar draped in a wrinkled white cloth drew my attention. Table and floor were covered with a variety of artifacts, some ceremonial, some more mundane. A laundry basket, cowry shells, a poem inked in red, a letter to Luna (one of the three characters in the play), a pack of American spirits, half a bottle of Jack Daniels, a gold platter heavy laden with candles, a purple yoga mat, a crystal teacup and a peacock feather. Beside the altar are a pile of books, most of which also live on my shelves at home. There’s poetry and essays written by iconic black feminists like Angela Davis and Audre Lorde.

Tolbert herself hadn’t arrived yet, so I took in the exhibit alone. There was an honesty to it, and an uncomfortable familiarity. I felt as though I had stumbled into someone’s bedroom that hadn’t been tidied up for company. The videos loop like an audio-visual collage of overlapping emotions sometimes speaking over one another. “I feel unsafe,” Alice told us. “It can happen to anybody.” Whether she means cancer or the cancer of the violence plaguing our community is up for interpretation, but the feeling she named is palpable.

Since the elections, there has been an uptick in hate crimes in my community. I was called a nigger while grocery shopping. One of my colleagues was attacked with pepper spray. Another friend almost got in a fistfight trying to protect a woman in a hijab who was being assaulted in broad daylight downtown. Between the Black Lives Matter Movement and the advent of cell phone cameras and social media live streaming police brutality, it’s been hard not to be on edge. Hearing Alice screaming “No” echoes the unvoiced dissent in my head. How many days do I wake up angry? How many nights do I run up my water bill trying to wash away the feelings of grief, powerlessness and invisibility? This is a story that goes untold, an experience of blackness that doesn’t get much attention.

I was lost in my thoughts when Tolbert arrived. We left the gallery to sit in the hall beneath, a rare patch of sunshine spilling through the skylight.

“I chose this space because I feel like Molly and the other gallery owners understand pushing boundaries in terms of art,” explained Tolbert. “I always thought it was the perfect space for Alice because I know that it is not typical kind, it’s not a usual kind of art, its not a typical kind of performance. And I know this space lends itself to experimental things.”

Tolbert, who hails from Kansas, is a font of creativity. She recently completed the year as Writer in Residence for the Richard Hugo House and has received accolades and fellowships for her writing from Cave Canem, Hedgebrook, VONA, Jack Straw, Ragdale and Artist Trust. We first met over the summer when she worked as a teaching artist for Y-WE Write, a writing and leadership camp set at the Whidbey Institute and run by Young Women Empowered (where I am a program manager). Her body of work includes poetry, fiction and performance art.

Despite being a prolific writer, Tolbert has often felt overlooked.

“There seems to be seven women of color in Seattle who get notoriety and attention and I am not one of them,” she said. Tolbert convened her own show, Leave it at the Beep, to highlight the talent and voices of other women of color in Seattle she felt have been overlooked. She has hosted four shows so far featuring eight different women each show.

Her newest work, 9 Ounces, was first shown at the Project Room in 2015. “I was the Project Room’s first writer in residence and they took a risk on me,” said Tolbert. “They had no idea, Jess [Van Nostrand, the founder] had no idea what I wanted to do and she was like, All right, we’ll commit to it, as long is there is a larger work at the end to show what you’ve been doing.”

After the initial debut, Tolbert took her show to the Hugo House and then the Twilight Gallery. It was there at the Twilight, in a room just slightly bigger than my living room, that I first had the opportunity to see the play. During the first act, the audience came to know three complex black women whose stories intertwined through their intergenerational friendship. “When I tried to write just a one woman show with just one person, I was extremely bored with myself. And I thought, OK, why not be totally crazy and have three characters in three different generations.”

We met Saraphina, a sassy octogenarian; Luna, a vivacious spirit child with a tender heart; and Alice Metropolis, a middle-aged free spirit just trying to “keep it moving” though the difficulties of her life and emotions.

“Saraphina was born out of just matriarch women that I knew, I mean my aunt, my grandmother, an older woman in Japan that I met," said Tolbert. She is the culmination of many older women that I respect.”

Alice and Luna also have their origins in people Tolbert has known, which is perhaps why these characters have such resonance. Being in such a small venue also gave the performance an intimate, conversational feel.

The performance taught Tolbert something: “I never realized I needed to be in shape for the movements when the characters jump in my body they change Anastacia’s posture, hand movements … I shifted in that, Wow, I need to be in shape, I didn’t know it would get so physical.”

Through snippets of their lives, watching them gossip about one another — Saraphina fretting over Alice’s impending nervous breakdown, Alice being cranky about Luna’s effervescence — you are gaining an insider look at the lives of black women. They are women who do yoga, ride the bus, drink shots of Jack, smile, yell and jump, normal things, not normal things. But as I watched the story unfold I thought of the opening stanzas of Ntozake Shange’s choreo poem, For Colored Girls Who Have Considered Suicide/When the Rainbow is Enuf.

She wrote: “Somebody, Anybody sing a black girl song.” This play was that, complete with the occasional Nina Simone riff. It provided an authentic representation of everyday women that I haven’t seen since the TV mini-series The Women of Brewster Place.

“Alice has always been around,” said Tolbert. In speaking with Tolbert, you get the sense that this is not just something she wrote, but rather that she has a relationship with each character beyond the page. “I sort of was looking back at writing back in 2008 where I didn’t name her, but I was writing a lot of persona poems and it just sort of dawned on me like, Oh my god, actually I’ve been writing about her for almost eight or nine years.” Then she corrected herself, “With her.”

Asked how the play and these characters have evolved over the past year, she answers: “To be honest I would say many things have shifted. I have definitely had to have a stronger sense of self.”

The opening chords of Nina Simone’s “I Put a Spell on You” began to play as Tolbert searched for her words. “There have been nights after the show where I sit by myself in the space and I think, Did these people get it? Did they get it? Did they hear the part about this or that? Did I nail it? Did I come across the way that I envisioned it? And then I asked the characters, Alice, are you satisfied? Sarafina, is there something I didn’t say that you wanted me to say. Luna sweetie, are you OK?”

Leaving the show I didn’t have to wonder if I got it. It was all too real to me, the way each character talked about their fears and put words to the violence we live with daily as well as the physical and mental health disparities that plague black communities. “I thought that some people would be more engaged and enlightened at the end of shows and I thought that the Q & A would be full of social justice revelations,” said Tolbert. “And I’m realizing that some people are more concerned with why does Alice wear a button down shirt and I have to be OK with that. It’s not what I envisioned would happen after every show and so I have to stop being disappointed.”

“I want them to stand by a woman of color at the coffee shop and say, ‘Good morning.’ I am tired of progressive talk not going anywhere and I was hoping the play would be a catalyst, a conduit, a bridge, a walkway, whatever analogy you want to use to making that better.”

Like most artists, Tolbert hopes her work will leave a mark on audience. In 2018 she hopes to turn it over to a new actress and step into the role of director.

For now, you can see 9 Ounces Thursday through this coming Sunday  at the Calamus Auditorium at Gay City, 517 E. Pike Street. General admission $15 to $20; students and seniors $12. Details and ticketing information here. 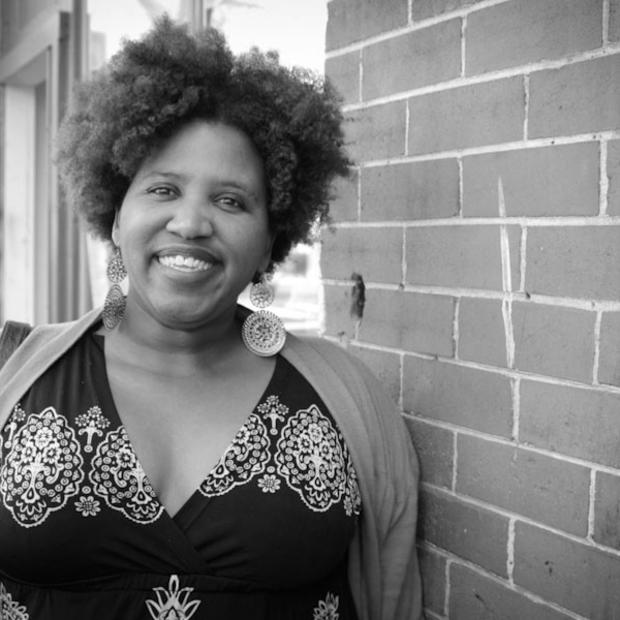