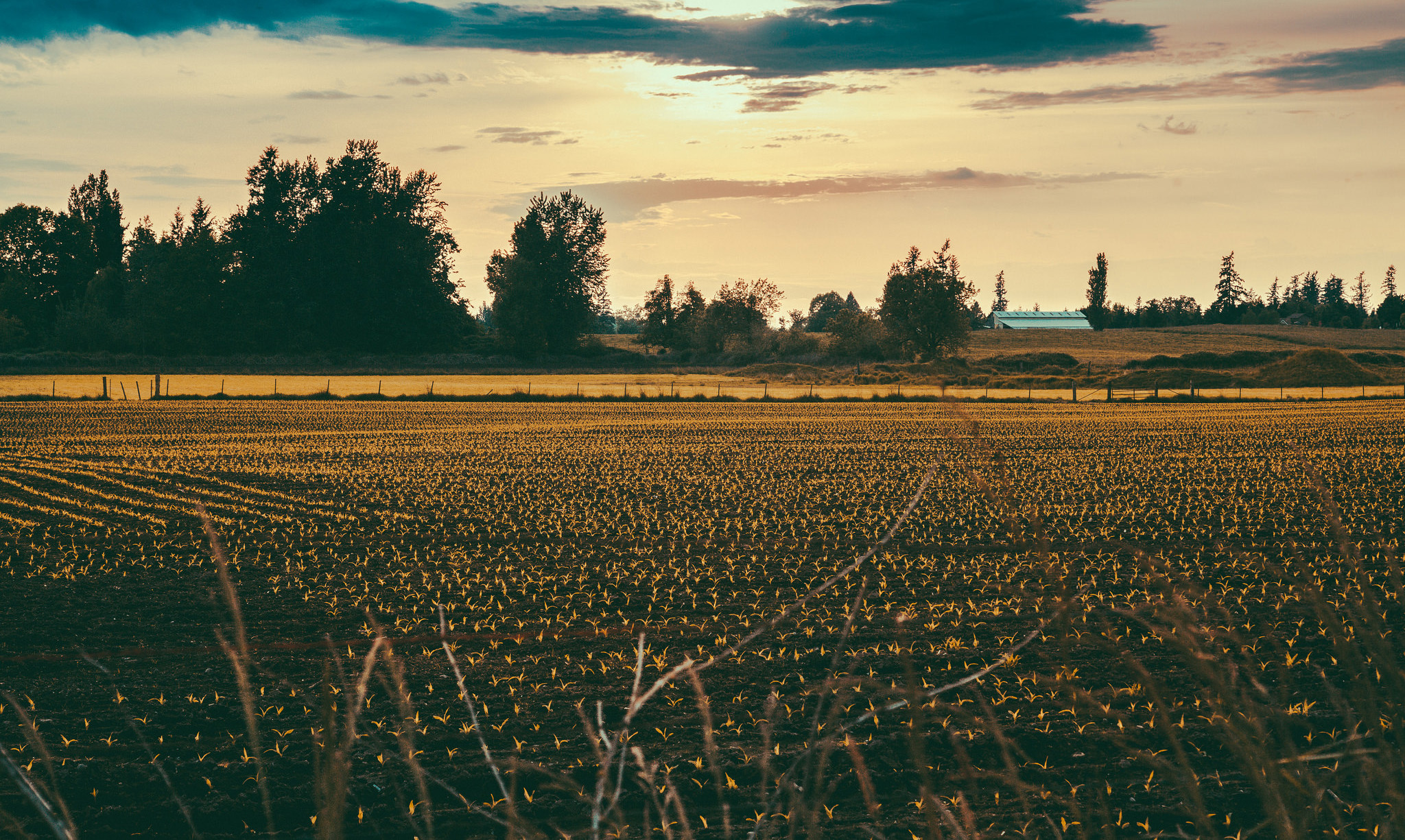 A farm in King County.

On a small farm in the Sammamish Valley on the urban fringe just 13 miles northeast of the Space Needle, Hampshire pigs squeal for their breakfast. An alpha sow, named Soprano for her high pitch, tails behind farm manager Perry Acworth.

Carrying pails of brewery grain through mud and straw, Acworth says, “I'm going to line these up right here along the solar fence.” She goes to turn off the electric current and grabs pumpkins on her way back, which the pigs dive into with relish. These 10 black and whites are little guys as pigs go, weighing in at about 80 pounds. Soon they'll be ready for market, to be sold to local restaurants and culinary schools as sustainably raised bacon and pork.

But there's a problem with the urban agriculture model, she says, and not because of any lack of farmers. It's because of the competition for land, especially lands on this coveted urban fringe that still retains rural flavor.

SAgE lies in a designated agriculture production district — or APD — but the red hot drive for development is putting its future at risk. “We just don't have the production that we need and that in a nutshell for King County, for Washington, probably for the nation as a whole, is that there's a lot of willing farmers — but access to farm land is that critical piece.”

The eight acres that SAgE farms is one of a collection of leased farmland parcels forming A Farm in the Sammamish Valley, a private agriculture park providing farmers with affordable access to farmland. SagE shares a border with the 21 Acres Center for Local Food and Sustainable Living, which acquired 75 acres in the APD over 10 years ago to protect farmland.

The operations are feeling the squeeze of sprawl from development, traffic and new retail tasting rooms from wineries in Eastern Washington, all vying for land. Two parcels of farmland next to 21 Acres, one on its southern border and another to the northeast, both within the production district, were recently purchased by Icarus Holdings LLC,  at prices never seen in the Valley.

One parcel sold for $1.85 million and the other for $1.5 million, far higher than appraised values. Around the same time, a roundabout was completed to accommodate new housing on a growing arterial in front of 21 Acres. Red flags were raised when the roundabout encroached on farmland.

“It's become a battle line between development and farmland, literally and figuratively,” says Kurt Sahl, operations director of 21 Acres. “There are alarms going out to us saying: Something is going on here. Somebody pay attention and if you don't, you're liable to lose this farmland.” On still another side of 21 Acres, a farmer is asking $7 million for close to 15 acres of APD land, a price far and above appraised value based on the property's currently limited use.

King County is well aware that the Sammamish Valley Agriculture Production District is the most heavily impacted by development of all five APDs in the county, according to the county's farmland preservation manager, Ted Sullivan.

Two factors customarily help to preserve an agricultural production district. One is the purchase of development rights and easements by the county. The other is zoning that restricts the number of structures.

Farmland Preservation bonds approved by voters in 1979 help the county purchase development rights and easements And the state Growth Management Act and the urban growth boundary are legal mechanisms that work to protect farmland.

But Sullivan points out that zoning restrictions, even when the land is within an APD, can't stop owners from selling or speculators from buying up land at prices no farmer can afford. Speculative investment allows prices to inflate artificially, he says, and signal to some farmland owners that it's time to sell. “The county can only acquire as many easements as a landowner is willing to sell.”

Sullivan adds, “Of course an investor can come in and out price us or anybody for that matter. We're limited to the appraised value as far as our acquisition.”

Farmland preservation advocates on the Woodinville City Council are also keeping tabs on what is happening to land in the lush Sammamish Valley. The valley has long been one of the state's major wine tourism destinations. The fact that it's also an agriculture production district adds distinctive character, says Councilmember Susan Boundy-Sanders. But it means farms need an equal chance to thrive. She notes that a total of 14 acres of agricultural lands were bought by speculators through holding companies this year alone. Another five acres were sold in 2013, and close to 18 more acres are currently for sale. There are more than 100 wineries, distilleries and tasting rooms in the area, and an estimated 75 farms, with just over 300 acres in food production.

Another red flag worrying farmland and rural preservationists in this valley is the growing number of unaddressed code complaints filed against illegal tasting rooms; most of them on rural lands. Rural lands are often directly across the road from agricultural lands and are often interwoven within them.

Boundy-Sanders says the operations, most of them in unincorporated King County rather than the City of Woodinville, “are thumbing their noses at the whole permitting process and clearly poking the bear, trying to see how far they can go in violating codes and permitting requirements.” The proliferation of tasting rooms has the potential to shut down farms, she asserts, because of increased traffic which makes it challenging for a farm to get goods to market and for residents to enjoy the rural atmosphere. There is space within Woodinville's city limits that could accommodate all the new wine tasting rooms, she says. But the operators don’t necessarily want to acquire property there or be subject to the city’s regulations.

John Taylor, King County's assistant director of water and land resources, acknowledges that code enforcement is understaffed throughout the unincorporated portions of the county. “Life and safety issues take priority,” he says, over enforcing zoning and use codes. The county commissioned a Sammamish Valley Wine and Beverage Study this fall to develop policy and code recommendations in the areas of economic development, transportation, land use and agriculture. The recommendations are expected to be presented and finalized by King County Executive Dow Constantine early next year. But there's no firm date for when code enforcement will resume.

Taylor says the county views the winery industry as very important to the valley and Woodinville. “But," he says, "our primary concern is protecting the agriculture land.” Look at the Sammamish Valley APD, he contends, and you'll see “we've bought development rights on an enormous amount of farm land.” And, he says, the county has maintained the boundary of the APD all along.

People may be buying land in hopes of developing it, but to realize that potential economic gain, says Taylor, “They would somehow have to change the prevailing zoning, which is agriculture. Despite many attempts and a lot of interest from people over the years in changing that dynamic, these are precious agriculture soils.”

In the current climate in the Sammamish Valley, however, you'd be hard-pressed to convince farmers and farmland advocates. The Woodinville City Council recently passed a strongly worded resolution calling for enforcement of King County's zoning codes, increased protections of agricultural and rural lands in and surrounding the Sammamish River Valley, and supporting transit improvements.

Back at SAgE Sammamish Valley Student Farm, Perry Acworth has moved on to feeding — and talking — to the East Friesian sheep. “Hi, guys. Good morning.” They get supplemental grains and, like the Hampshire pigs, pumpkins. She pauses to look at her surroundings as geese fly over acres of food and animal production and the Sammamish River, where clouds of mist hang. In the background, vehicles navigate the new roundabout. She points out a farm whose owners are asking $7 million for just under 15 acres. “Only a speculator could come up with that,” she says.

If the farm sells, it's even more cause for worry, Acworth says, because the land serves as a buffer between the increasingly busy arterial and the farm she manages.

“What happens there will directly affect the Sammamish River and directly affect the food production here.” Farms nourish the land, she says. “They preserve water quality because they serve as buffers between the river and the road. They provide healthy food with a low-carbon footprint and a place for new farmers to learn and for the community to engage. The list is endless.”

And with that she goes back to work: hauling straw for the Hampshire pigs and checking starts in the greenhouse.