The quest to create a greener guitar 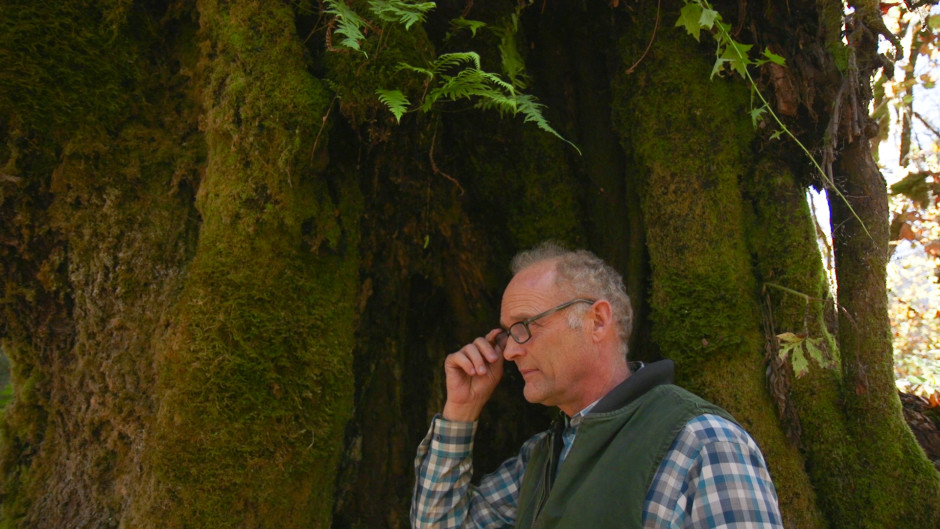 This article originally appeared on KCTS 9 and Earthfix.

Steve McMinn ducks into the hollow of an old maple tree and tears a chunk of wood from its insides. It’s not easy to find the perfect tree.

“Sometimes your fingers can tell you more than your eyes,” he said. “It has to be a straight tree, a fairly large tree, a tree that didn’t grow too quickly nor too slowly.”

It also has to be flexible enough to vibrate, pleasing to the eyes and ears, and strong enough to hold a musical instrument together.

For decades, McMinn has supplied the guitar industry with wood grown from the Columbia River to Alaska. He runs Pacific Rim Tonewoods, a small sawmill in Washington’s North Cascades. It has become one of the biggest wood suppliers in the country for musical instruments. Each year, McMinn ships to America’s biggest guitar makers hundreds of thousands of soundboards (the top of the guitar body) made from Sitka spruce.

Now, those customers are looking to McMinn to help find a better source of wood — wood that’s more environmentally friendly. Many guitars are made from rare trees like rosewood, mahogany and ebony. They’re popular for their good looks and good vibrations, but their high value also makes them attractive to poachers in parts of the world often devastated by deforestation.

Tree theft to supply guitar makers isn’t limited to the Tropics. In a recent case, a tonewood supplier in Winlock, Washington, was indicted by the Department of Justice for buying wood illegally harvested from the Gifford Pinchot National Forest. This kind of poaching has been happening for years and years.

“It’s increasingly difficult to source wood from the tropics and be clean about it,” McMinn said.

Under federal law, guitar makers can be held liable for manufacturing their products using poached wood. In 2009 and 2011, U.S. Fish and Wildlife agents raided Gibson Guitar Corporation in Tennessee and seized wood that the agency said was imported illegally from Madagascar.

“I personally get involved in the entire supply chain,” said Bedell, who runs a guitar company in Central Oregon. To ensure the legitimacy of his wood suppliers, Bedell travels around the world and visits their operations in person.

He recently launched a “homegrown” guitar series, generating one-third of his sales on guitars that use domestically-grown wood like Oregon’s myrtlewood and oak.

Another solution may be growing in McMinn’s backyard: the bigleaf maple tree. The hardwood grows prolifically in the damp forests of the Pacific Northwest, but very few develop the beautiful wavy grain that guitar makers want, known as “figure.”

“You find it very rarely in nature, and we don’t know what the cause is of this figure,” said Jim Mattsson, tree geneticist at Simon Fraser University in British Columbia.

Mattsson had a hunch. In Finland, scientists found that a similar defect in birch trees was genetic and could be cloned.

So last year, Mattsson and McMinn teamed up to study the genetics of figured maple trees. Mattson’s lab began taking cuttings and using them to grow new trees in baby food jars.

Next year, when the trees grow large enough, Mattsson and McMinn will transfer them to 50 acres of farmland in Western Washington’s Skagit Valley, where they hope to create a figured maple plantation.

“I hope in the long term, people around the world will come to the Pacific Northwest to buy figured maple,” McMinn said.

It could take at least 10 years before the trees reveal whether they’ve developed the wavy grain. But figured grain in maple trees may be triggered by environmental factors like bacteria or fungus, Mattsson said.

“I’m willing to wait,” McMinn said. “Left to my own, I’d rather just have trees.”

If McMinn’s trees don’t develop figure, at least McMinn’s land will have trees.