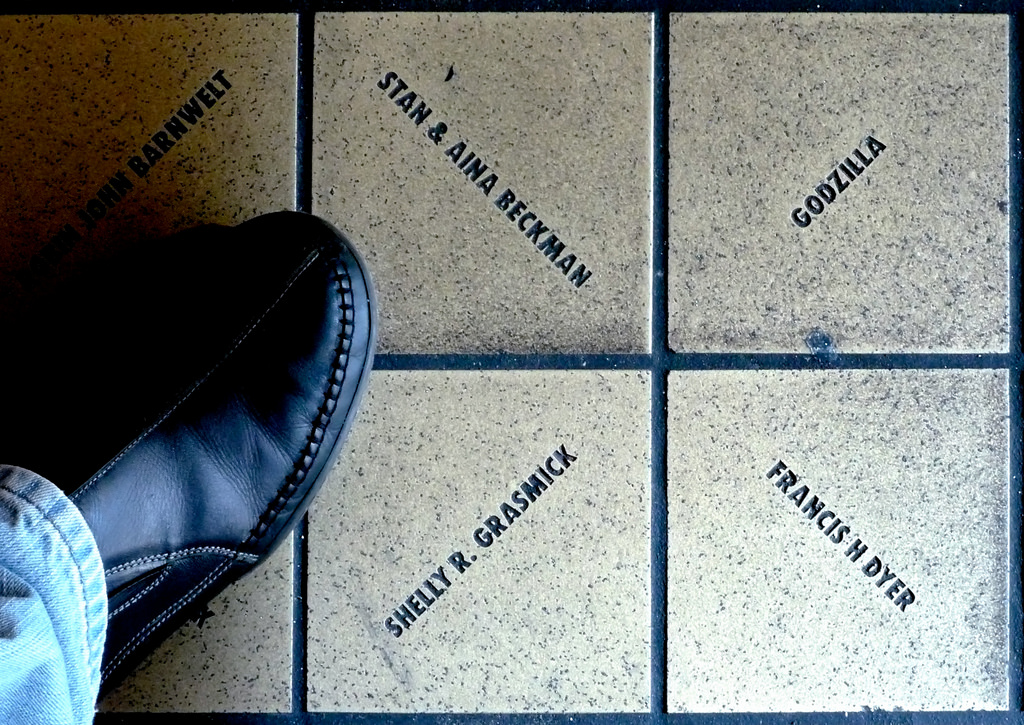 Pike Place Market is familiar to us all, yet full of surprises. According to the Market’s last annual report, the Market Foundation served 59,000 meals to low-income seniors. Cleaning the Gum Wall in Post Alley yielded 2,350 pounds of chewed gum. The global press coverage of that event generated 10.8 billion media impressions. Visitors to the Market’s bathrooms used enough toilet paper in 2015 to stretch from Seattle to North Carolina! (That’s 2,810 miles.) No surprise: Some 10 million people visit the Market each year.

Despite all those folks trampling through, there’s one thing few of us notice: all of those tiles on the floor with people’s names on them. The place is so crowded that stopping and looking down is not a successful strategy for navigating the stalls. But those tiles can be quite interesting. Here’s an example that piqued my curiosity.

I got a phone message from Marga Rose Hancock, a Seattle architectural historian. Standing in front of Lowell’s Restaurant in the main arcade, she happened to look down, and there at her feet was a Market tile with a name on it: “Barack Obama.” Wow. Not many people with that name. She asked nearby vendors, some of whose families have been there for generations: Did they know Obama had a tile at the Market? Never heard of it, they said. I hadn’t, either. So I went to down to the Market to meet Marga and see for myself. Lo and behold, there it was. Where did it come from?

We went up to the Market Foundation office to uncover the scoop. The Market tiles were used as a fundraising gimmick that started in the early 1980s: Donate $35 and you could put a message on a tile. The money went to fixing up the Market. About 55,000 tiles were sold, mostly in the ’80s, with a few in the ’90s. Families enshrined their names and quirks. You can find a database of tile names on the foundation’s website, and grid numbers and a map to their locations.

Over the years, some tiles have had to be replaced. They can get pretty battered over time with 20 million feet pounding them each year, not to mention the metal wheels of fishmongers’ carts. Some have been ground into nonexistence. Foundation campaign manager Patricia Gray says damaged tiles can’t always be replaced — a sensitive topic for some who think of the tiles as a memorial to lost family members. It’s not like a cemetery where there’s a promise to maintain a tile in perpetuity. Still, remarkably, some 50,000 tiles have survived the decades.

The Obama tile appears to have been added by an unknown someone in about 2008, when a section of damaged tiles was replaced. At least that’s the best guess of Marlys Erickson, former head of the Market Foundation, who said it might have been added as a “space filler.” The tiles in that section look newer than those around them.

While Marga and I were a bit disappointed that Obama most likely didn’t personally lay down some cash in the ’80s to help the Market, it got me wondering: What other tiles are lining the floors of the Market that we should know about?

It turns out that Obama isn’t the only president with a tile: Ronald and Nancy Reagan have tiles, too (origin unknown). So do some famous local politicians: former Senator Warren G. Magnuson, and former Mayors Dorm Braman, Wes Uhlman, Paul Schell and Charles Royer.

There are lots of tiles of prominent Seattle families: Bill Gates III and his family have tiles. A bevy of Nordstorms do, too, and a Weyerhaeuser. Oh, and so does waterfront restaurant legend Ivar Haglund. Market savior Victor Steinbrueck has one, of course. Scanning through the names is a bit like looking through a time capsule of the 1980s, with tiles for businesses such as Seattle’s Tubs and KTZZ Channel 22, launched in ’80s. Ann and Nancy Wilson, rock goddesses of Heart, also have tiles.

You can find the infamous, too. The UFO/suicide cult Heaven’s Gate appears to have purchased a tile in 1985. And Judge Gary Little, a prominent local figure who committed suicide over accusations of sexual abuse, has a tile.

Others send messages: “I Love Tim Burgess,” announces one. Some feature curious names: “Grandma Moo,” “Red Wolf Woman,” “Wimpy Sargent,” “Tweeter and Snicky.” Pets are celebrated as well: “Our Poodle Maggie,” reads one. But most were placed by locals who, for posterity, wanted people to know that their love for the Market was literally part of the place.

Pike Place Market is currently undergoing a major expansion to connect to the new, post – Alaskan Way Viaduct waterfront. Around $9 million needs to be raised; of that, there’s still a little more than $3 million to go. Are tiles being sold to help underwrite that? No, says Gray of the Market Foundation, but the foundation fundraisers think they have something better.

For high rollers, they’re selling brass pig footprints to all who donate $5,000. For $180, you can be honored with a steel “charm,” something that looks like an oversized silver dollar and can be inscribed with your name or message. Some 14,000 of them will be suspended from a railing surrounding a new plaza, and they will move and shimmer in the wind and sun. The tokens should be in place for the project grand opening in the summer of 2017. (Want to buy one? Find information at pikeup.org/donate-now.) The old Market tiles, meanwhile, remain in place.

Let’s hope a new generation of Seattleites exercises the same quirky creativity of previous generations in helping the Market by commemorating themselves, their heroes and their pets.

This column originally appeared in the November issue of Seattle Magazine.