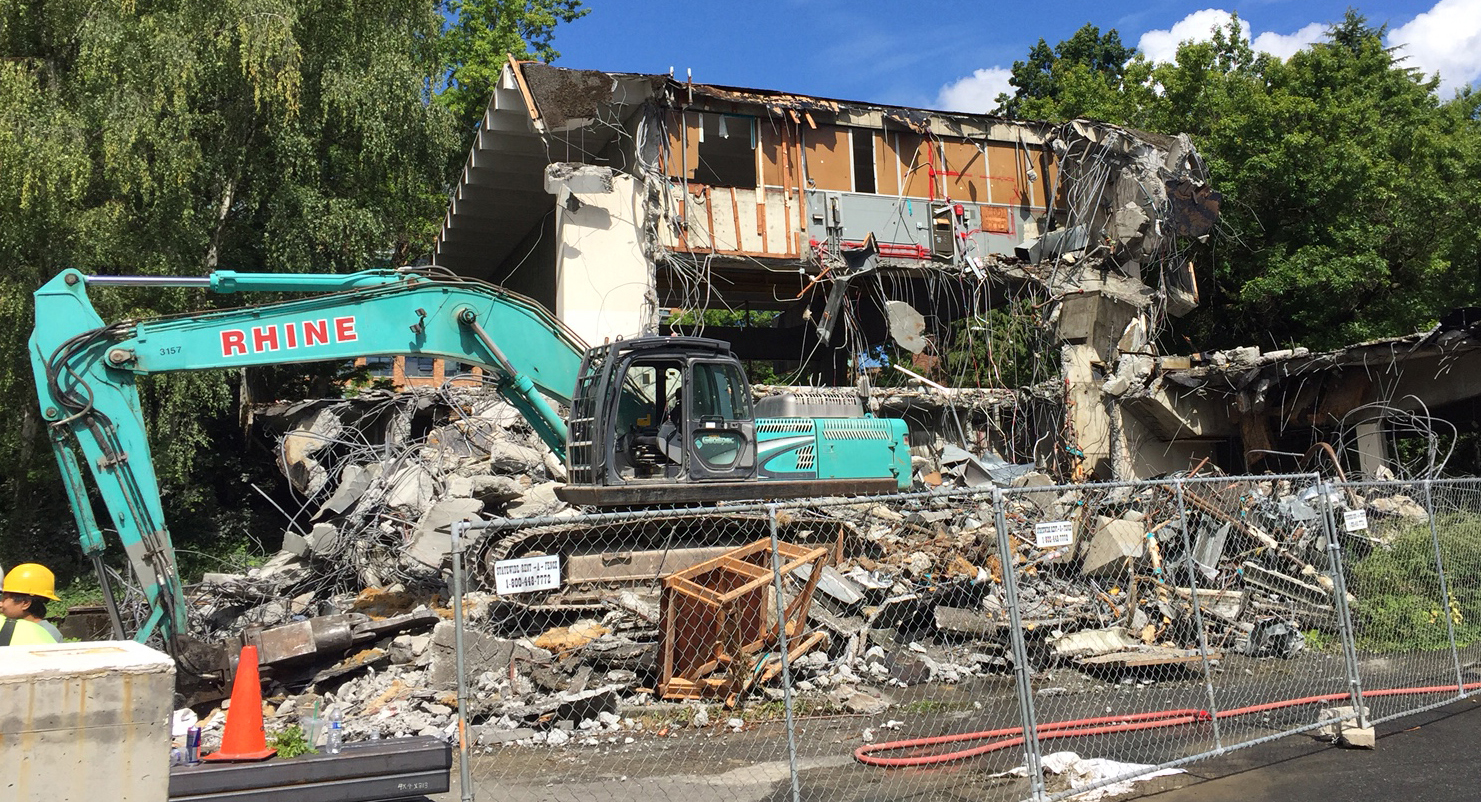 For 2016, here’s a “basket of deplorables": our annual collection of failures, crimes and bad behavior when it comes to protecting — or rather, not protecting — the Pacific Northwest’s heritage. Featured in the eighth annual collection of Heritage Turkeys are at least four of the Horseman of the Heritage Apocalypse: Demolition, Vandalism, Climate Change and … Instagram!

I’ve covered the controversy over the University of Washington’s More Hall Annex, aka the Nuclear Reactor Building, for years — arguably ad nauseum. But it’s been a hugely important battle in terms of preservation. The Nation Register landmark structure was finally demolished earlier this year after the UW won a court case exempting the university from Seattle’s landmarks law. In other words, when it comes to UW properties — some of the most historic in the state — only the UW gets to decide what’s worth preserving. The citizens of Seattle are shut out of any public process. The city is appealing the court’s decision, and continues to refute arguments by the university that the UW is exempt from local land-use laws and preservation ordinances — arguments that, if affirmed by the courts, could also exempt other state universities. This could put historic properties in jeopardy all over the state.

In November, the Washington Department of Archaeology in Historic Preservation filed an amicus brief with the state Court of Appeals supporting the city’s appeal, saying that the earlier decision exempting the UW could jeopardize national accreditation of the city’s preservation program, and could put at risk 52 other state preservation programs The “court's ruling could negatively affect the structure and functioning of Seattle's and the State's historic preservation programs and potentially affect eligibility for federal funding," the department argued. "It is antithetical to the intent and structure of the Federal-State-Local preservation partnership under the National Historic Preservation Act for a university that controls significant numbers of historic properties within a Certified Local Government city, to be exempt from that city' historic preservation ordinance.” In other words, local programs have to meet federal guidelines to access federal funds or tax credits for preservation, and the court’s decision in the UW case could throw programs out of compliance. The appeals court accepted the Department of Archaeology in Historic Preservation's brief despite the UW’s argument that it was “irrelevant” to the appeal. Interestingly, by law, the State Attorney General represents both the UW and DAHP, meaning the AG’s office is arguing both for and against the UW’s case.

The bottom line is that the UW is responsible for the loss of an important, nationally recognized historic structure, has plans afoot to demolish more potentially landmark-worthy buildings in its new master plan, and is claiming the right to pick and choose which local land use laws it complies with. It has sued local all-volunteer preservation groups with few resources to fight back. Its legal case has the potential to damage historic-preservation efforts statewide. If there were a national championship playoff for institutional arrogance, surely the UW would be in the finals.

The Northwest has its share of knot heads, and a particularly egregious case of knot-headery was caught on camera when a group of vandals destroyed the Duckbill sandstone formation at the Cape Kiwanda Natural Area on the Oregon coast last summer. “Got 'em!” yelled one of the punks who destroyed the natural landmark feature by shoving it over. Reports indicate that Duckbill had attracted a lot of attention — folks hopping up on it and posing for pictures in yoga positions, for example, which was also illegal but too tempting for some folks. The Duckbill vandalism has been cited as an example of Instagram tourism — easily accessible scenic treasures that wind up being loved to death or damaged by hordes that don’t respect the rules. The question arises: Are social media, the Internet and geo-tagging serving as forces for good by bringing more people into the outdoors or are they helping to degrade precious places? And speaking of loving something to death with cameras, here’s an example: A bunch of tourist photographers in Seward, Alaska, last July chased a mountain goat along a breakwater to get close-up pictures. The frightened goat jumped into the water — Resurrection Bay, of all things — to escape. Instead, it drowned. Sad.

Another water ship down

Preserving maritime heritage is problematic: Saltwater and wood don’t make good long-term companions without great care, constant maintenance and expensive restoration. Plus, finding a place to store or moor one is expensive. Some of the best have gone to the wrecking yard in recent years, like the streamlined ferry the Kalakala and the sailing ship Wawona. Eric Lacitis of the Seattle Times has documented the travails of saving historic Patrol Boat No. 1, a 1918 tug that operated as a Seattle harbor patrol boat in the 1920s and ’30s, saving folks in distress and chasing bootleggers during Prohibition. Like many historic boats, it became one man’s dream to restore it. But the boat turned into a money pit and subject of legal tangles between the owner and the Port of Port Townsend where it was stored. Unfortunately, this fall, the Port felt it had no choice but to demolish the boat after it had failed to sell at auction. As is typical in such cases, there was a fair amount of finger-pointing about whose fault it was, but the bottom line is that the region lost a vessel with a fascinating history whose relevance seemed to be increasing as Seattle focuses on revitalizing its waterfront — where such a vessel might have made a historic addition.

Pacific Brewing and Malting owner Steve Navarro had a true treasure in his hands — a six-pack of century-old beer from Tacoma’s original classic brewery of the same name, one-time maker of Tacoma brand beer. The amazing thing: The bottles were full and unopened, found, apparently, under the stairs in an old hotel. Navarro was very interested in finding out the makeup of the beer inside, which had certainly gone bad over time. He had emptied one bottle and sent the contents to a lab to be tested to determine what yeast was used, but the initial results were inconclusive, according to Tacoma’s News Tribune. But in November, some nimrod(s) smashed a window in his truck and stole the rest of the six-pack. Navarro doesn’t care who stole his antique beer bottles, he simply wants the irreplaceable treasures returned. Brewers are very often interested in studying and recreating older regional beer styles — for example, earlier this year Pabst Brewing released Rainier Pale Mountain Ale, which is partly based on beer styles from the early post-Prohibition era. But brewers are often hampered by a lack of records, recipes and actual samples. Navarro told the paper, “There’s a big part of Tacoma’s history and a big part of this brewery’s history in those bottles.” The bottles do have tangible price tag: Navarro paid $1,000 for the rare, original unopened six-pack. He’s offering a reward for their return.

Belles of the wrecking ball

Teardowns of historic structures continue throughout the region. Some concerning examples:

Chris Moore of the Washington Trust for Historic Preservation observed to the Everett Herald, “It would be a sad irony if the building in which [Scoop Jackson] attended elementary school were demolished on or about the 50th anniversary" of the National Historic Preservation Act of 1966. Jackson was the prime sponsor of the law that is the foundation of historic preservation nationally.

Showdown at the Malheur corral

The armed occupation of the remote Malheur National Wildlife Refuge in Oregon's Harney County by right-wing militants was damaging, costly and a set-up for future conflicts over public lands. In early January, the occupiers, led by Ammon Bundy, took over the remote wildlife refuge, well known as a migrating bird sanctuary. During a 41-day occupation, they shut down public access, vandalized and trashed the facility, disturbed Native American cultural resources, bulldozed sensitive areas and tore down fences to open the refuge to cattle grazing, all on behalf of a crackpot theory that maintains the feds do not own federal lands, which should be returned to ranchers and resource extractors. One armed occupier, Robert “LaVoy” Finicum, was killed by law enforcement off-site, but many critics observed that the gun-toting, mostly white occupiers were granted a tolerance from law enforcement that would not likely have been extended to other armed activists.

A federal trial in October of the occupation’s leadership on conspiracy charges in Portland resulted in the defendants being acquitted. Some blamed prosecutorial overreach,but the shocked and delighted Malheur occupiers claimed vindication. Their supporters were energized. Said one Montana legislator, “I think it will be very empowering. It indicates that American citizens are waking up and we don’t want to be kept under the thumb of the federal government.” Efforts to create new national monuments have been stalled due to the post-occupation political landscape, among them Oregon’s Owyhee Canylonlands proposal. Some in Congress are seeking to overturn monuments previously designated. The Malheur occupation was a fiasco with long-term, negative implications for preservation and protection of public lands.

Nowhere is climate change’s impact on heritage more dramatic than in Alaska and Northwestern Canada, including British Columbia, the Yukon and Northwest Territories. This year, the Iditarod dogsled race organizers had to bring in railroad boxcars of snow to start the race! And that was before this winter’s “extraordinarily hot” Arctic temperatures and diminished ice pack. As the ice, permafrost and glaciers melt, the new conditions are exposing potential archaeological sites to erosion and flooding. Long protected by ice and cold, artifacts — ranging from ancient Inuit tools and village sites to glacier-bound corpses and sunken ships — are being revealed. Other sites and artifacts are literally washing out to sea. Exposure to the elements is making preservation more difficult. In the case of old ships, ocean acidification and wood-eating worms can become problems. In the warmer climes many materials are now subject to rapid rot, deterioration, insects and the risk of wildfires.

As a result, researchers are working against time, often without the resources to stem, literally, the tides. Tom Andrews, an archaeologist for the Northwest Territories, says, “If you take the sum of the impacts, the thawing permafrost and the coastal erosion of the high Arctic, the sum of that archaeological loss is really awful. It’s really a disaster.” Ancient Alaskan sites in jeopardy include the 4,000-year-old Walakpa site near Barrow and Cape Espenberg, where a buckle has been found that may be the earliest evidence of trade between Asia and North America. The Union of Concerned Scientists issued a report in 2014 listing U.S. national monuments at risk, including Alaska’s Bering Land Bridge National Preserve. The problem is for the living as well, with native villages and ancestral lands throughout the region heavily impacted.

The damage is already on an epic scale. Part of the tragedy is that the loss of material is coming just as technology is allowing us to learn more about the history of the planet and human history from the data recovered from archaeological sites (like DNA). An anthropologist speaking to the New Scientist described the situation this way: “This material is like the library of Alexandria. It is incredibly valuable and it’s on fire now.” Archaeological sites help us read the history of the planet in archaeological data, but this “book” burning due to climate change is no hoax.