As African Americans leave Seattle, black churches hang on by a thread 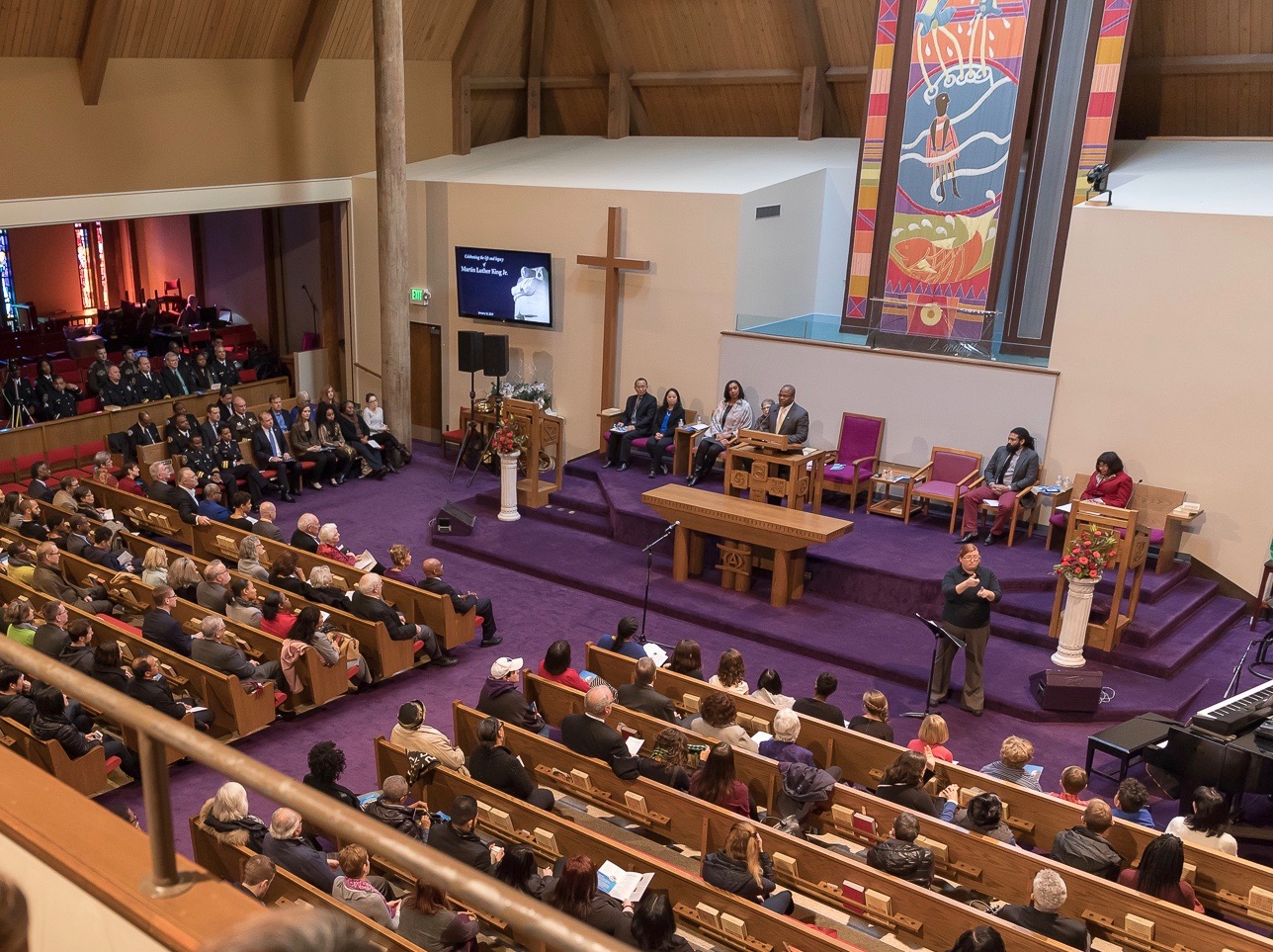 If you’d told Pastor Reggie Witherspoon in 1987, back when he first heard the call of God to start a place of worship, that one day a white man would sell legal weed just feet from his front door, he’d have called you a liar. But 28 years since Mt. Calvary Christian Center was just a circle of 15 chairs, Pastor Witherspoon daily shoos away customers of the pot shop next door — from his parking lot, his front stoop, the doors of his teen center — like a janitor scattering pigeons.

Reverend Beverly Jackson was in Portland when she got a call. A senior member of Curry Temple Christian Methodist Episcopal Church, housed in a columned brick building off 23rd Avenue, arrived at the church around 7 in the morning to turn on the heat. But the lights wouldn’t come on. Then he noticed something in the back, scrawled in black graffiti: “Go back 2 Africa.” Rev. Jackson drove the three hours back to Seattle, wondering who would do such a thing.

Reverend Carl Livingston is stretched thin. A member of the United Black Christian Clergy and the lead pastor at Kingdom Christian Center, which has outposts in Federal Way and off Rainier Avenue, he teaches political science and history at Seattle Central College in his free time. Since the recession, which hit his congregation hard, Rev. Livingston has been digging into his own pockets, kept full enough from his teaching job, to keep the facilities from falling into disrepair. It’s a struggle, he says, but if he’s not giving all he’s got, what kind of pastor would he be?

These are the leaders of just a few of the more than 30 churches in Seattle that serve predominantly black congregations, many of them in the Central District. They all tell of recent struggles as their congregations have been drawn away from the neighborhood and the city, making way for a newer, wealthier and whiter population. And they describe the temptation, which literally knocks on church doors daily, to sell and follow their communities in the African-American exodus from Seattle.

Seattle’s most prominent celebration of Dr. Rev. Martin Luther King Jr. is held each year in Mt. Zion Baptist Church, on the border between Capitol Hill and the Central District. Friday, January 13 marked 44 years of the event, which is sponsored by Seattle Colleges and often attracts figures, both black and white, in the upper echelons of civic life: mayors, governors, executives.

That it takes place in a church is no small detail. Dr. King was an American Baptist minister, his doctorate was in theology and much of his organizing came as the leader of the Southern Christian Leadership Conference, a social justice movement built on the organization and conviction already within the black church. He paid a visit to Seattle in 1961, on the invitation of Mt. Zion's longtime pastor, Rev. Samuel B. McKinney.

Rev. Livingston compares the role of the black church in African-American life to that of the Catholic church for Mexican Americans, the synagogue to Jews, and even Native American sweat lodges. “I’m talking about it being the platform, the hub, the refuge, the teaching center, the bastille that you run into when things are falling apart around you,” he says.  “The black church, whether it’s meeting in a tent or a temple has been so crucial to the African-American existence and sojourn in this country. It’s because it was the freest institution we had, even though it was regulated in slavery.”

Just as Dr. King saw activism and the church as inextricable, Seattle’s African-American church community is expected to keep one foot in the social justice activism of black Seattle. At a meeting last summer of Not This Time, the organization created by Andre Taylor and Devitta Briscoe after police shot their brother, Che Taylor, some attendees laid into church leaders for not playing a bigger role in the effort to change Washington State laws governing police officers' use of deadly force. But Briscoe says that’s changed and Mt. Calvary Christian Center, Mt. Zion and New Beginnings Christian Fellowship are now all heavily involved.

“We put a lot of pressure on pastors,” says Livingston. “It’s not just, ‘Thank you for starting the service on time or not keeping us too long.’ We ask the pastors, ‘What can you do to help, because my family’s falling apart?’ ‘Yeah, the service was good, but our community’s falling apart and you’re not doing anything.’ Being a pastor is a really big job if you’re really trying to respond to the needs of the parishioners.”

The needs, lately, are many. Although the graduation rate of black youth in Washington has steadily climbed from 60 percent in 2005 to nearly 70 percent in 2015, that success has done nothing for wages. As median income has skyrocketed in Seattle, from $45,000 in 2000 to $70,000 in 2014, according to the Seattle Times, black wages began to fall precipitously during the recession, around 2010, and have never recovered. The median black household in Seattle earned just $25,700 in 2014. This happened even as black incomes nationwide increased.

Asked what is driving Seattle's uniquely unequal trends, Brian Surratt, director of Seattle's Office of Economic Development, says he has his hunches, but very little data to back them up. "Who’s driving the salaries? That’s in tech," he says, pointing to the notorious lack of diversity in Seattle's premier industry. "We all lament the paucity of African Americans and women in the industry. I wonder when you start disaggregating sectors, I wonder if tech is just blowing the salaries out of the water. Is that driving the disparity?"

Combine that disparity in wages with Seattle's explosive real estate market, and Seattle has become a tinder box for displacement— and this, too, impacts African-American communities disproportionately.

It’s there in every zoning map of Seattle, from the 1930s to today: Predominantly white neighborhoods ringing the Central District are designated as exclusively for single family homes, and as such are protected from absorbing Seattle's explosive growth. The Central District, Seattle's historically black neighborhood, carved from  the city by discriminatory lending practices, was zoned to accommodate more density.

When explosive growth came to Seattle, the Central District became a pressure relief valve. New, high-density, high-end development has come in and black people have been pushed out. The table was set well before anyone could imagine a Seattle like the one we have today, and no one has ever bothered to rearrange the silverware. Today, African Americans make up less than a fifth of the neighborhood's population.

Each Sunday, cars still line the neighborhood streets in the CD. At Tabernacle Missionary Baptist Church, men in suits and women in hats slow traffic on 28th avenue. At First African Methodist Episcopal Church in Capitol Hill, parking can be hard to find with all the restaurants and development nearby.

Many of the parishioners are not from down the block as they used to be. Instead, they drive in from Federal Way, Kent, Tukwila and other places longtime residents of the Central District have moved. Rev. Jackson guesses that maybe 50 percent of her congregation comes from Seattle proper. Pastor Witherspoon estimates 10 percent, “20 percent maximum.” Ten years ago, Witherspoon says, that number was 90 percent.

Even so, there is still a semblance of stability among some churches. Many long ago paid off their mortgages. With the devotion of commuting congregants, there’s a slight delay in the pain visited on Seattle’s black community, like the seconds between stubbing your toe and waiting to see how much it will hurt. But there are signs.

In the early days of the southern exodus, Pastor Witherspoon said attendance at Mt. Calvary didn’t take too much of a hit. But that’s changing. “People don’t want to make the drive,” he says. As a result, the church has started to tighten its belt.

Rev. Livingston sees the worst effects in tithings, which he traces back to lagging employment and wages. “When you look up and expenses have gone up and income gone down, you’re in trouble,” he says. “All you’ve got to be is one dollar short on your budget, in the red, and now you got fees and fines and you’re on the death spiral. The black churches are in that situation.”

Were it not for his full-time job at Seattle Central, Rev. Livingston is not sure his church could survive.

On top of that is tremendous pressure from the real estate market. “There are a lot of things going on in the area with developers wanting to buy churches,” says Rev. Jackson of Curry Temple. “We get letters and offers all the time. We’re being pressured to fail. I used to get them at least weekly. I’ve gotten phone calls. I don’t know how people get your phone number, but they do.”

Jackson and Witherspoon have both resisted selling — Jackson calls the idea “ungodly" — but when debts pile up, some organizations start to bend. Last June, the Seattle Medium, a small newspaper based out of the Madrona neighborhood, highlighted the tensions inside Mt. Zion, which wanted to sell off annex property. Membership repeatedly voted against selling, but, apparently seeking to get out from under its debt, the leadership persisted. Last September, according to the Capitol Hill Blog, the church sold its annex property to a Mercer Island developer for $3.2 million.

Nearby, the Southside Church of God, on 20th Avenue between Yesler and Jackson, was recently torn down. It will soon be replaced by four townhomes designed by Playhouse Design, which has the incongruous slogan, “The Most Compelling Argument for Intelligent Design.”

Witherspoon doesn't have a lot of hope that the trends will reverse themselves. The change, he says, "will make its way all the way through Columbia City and South Seattle and Seattle will look almost all white.” Blacks, he says, will be “all over the place. We will be the diaspora of Washington State and the Seattle area."

The Seattle City Council has passed measures designed to both construct new affordable housing and to keep people in their longtime homes. With his Housing Affordability and Livability Agenda, Mayor Ed Murray has added density in certain pockets and offered extra building height to developers who pay for affordable housing.

But the pace of government lags far behind the changes already well underway. As Murray and others talk about “mandatory inclusionary zoning” and new height classifications in the city’s rising “urban villages,” the black churches struggle with shaky roofs, moldy basements and construction all around them. Those things, according to a spokesperson from city's Office of Economic Development, cannot be helped because of restrictions on public money for church organizations.

So the churches look to the future. Some seek to draw the newcomers into their congregations. "We’re a predominantly African-American church," says  Witherspoon. "That’s who we are. But we also realize that diversity is a good thing. We do little things in our services that can be appealing to people of different ethnicities. We deliberately go out into the community to try to engage, but we’re not finding them very susceptible to our church."

Pastor Witherspoon wonders where that could eventually lead. "What will they do," he wonders, "if we're called to our community and our community doesn’t look like us anymore?"

Someone once described Seattle's black population as a bucket of water, once contained and now spilled across the region, mostly to the south. As a result, the parks and museums and libraries named for black heroes are increasingly at risk of turning to memorial plaques rather than functioning centers.

Witherspoon worries the churches have already set off down that path, and that it may be too late to turn back. “If we left here, would they miss us?” he asks.