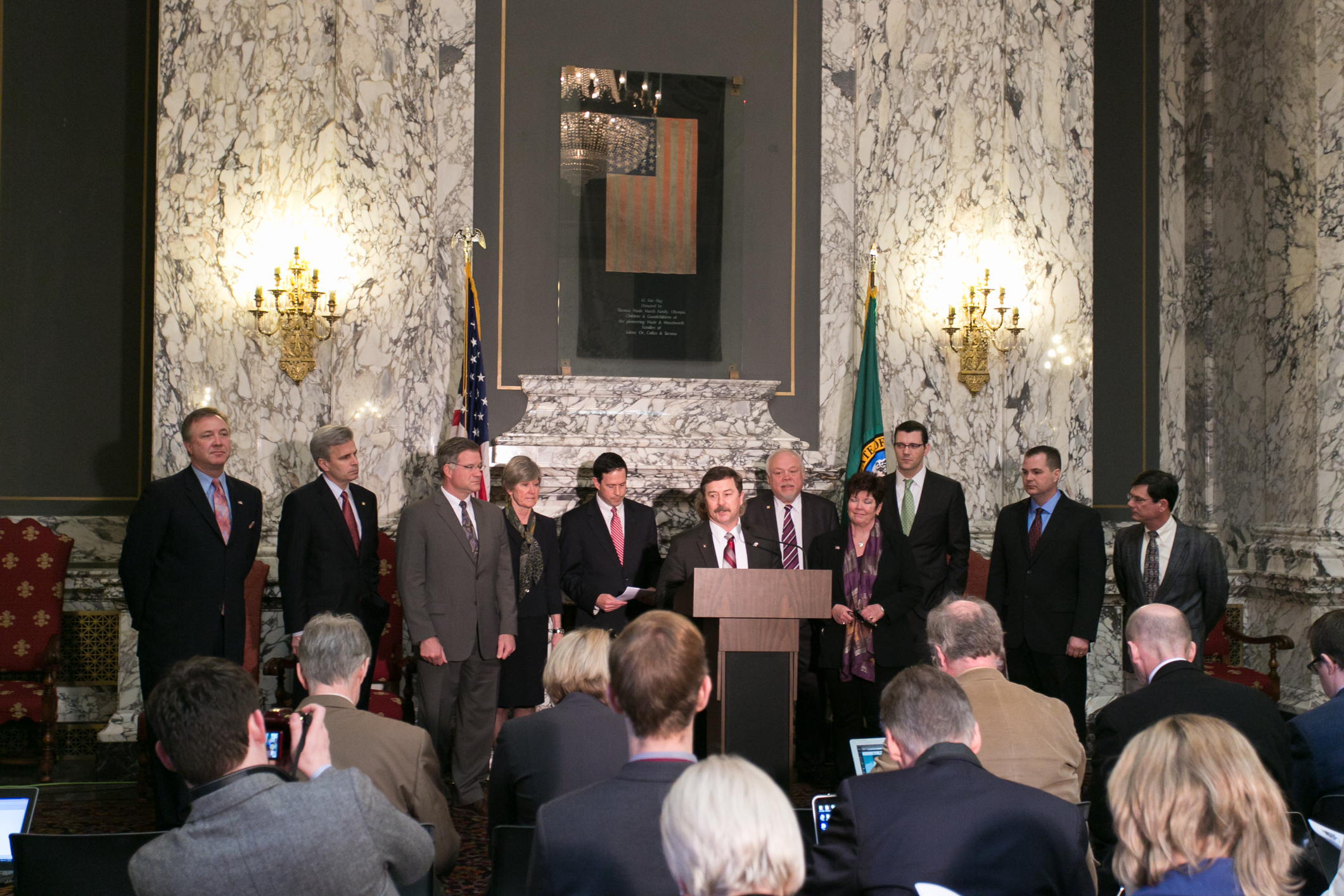 Sen. Mark Schoesler was at the podium as the Senate Majority Coalition gathered in a show of unity to unveil a budget plan in 2015.

Lawmakers convince. They cajole and coerce, and sometimes even cooperate.

This year, though, mostly they've been doing a lot of waiting — as Democratic legislators wait on Senate Republicans to bring out a proposal for filling the state’s multi-billion-dollar education funding gap. The GOP proposal was due at the start of the month, when Democratic legislators presented their version of a plan, but Republican legislators skipped a pre-session meeting where they were expected to present their own.

As the Legislature approaches the end of its second week, the wait continues, but hints of the shape of negotiations — and a few specifics about the plan — are coming to light.

In interviews this week, a picture emerged of the Senate Republican caucus as faced with reconciling a range of members, from anti-tax hardliners to relatively moderate fiscal conservatives. And the accounts portray a leadership that generally let lawmakers make principled stands in private, often taking extra time to emerge from closed negotiations as a united front.

That patience and tolerance for dissenting views within the caucus are key to understanding the strength of Senate Republicans. By staying united in the Senate, despite a narrow 25-to-24 majority, the party has largely overcome the disadvantage of Democratic control of the governorship (for 32 years running) and the House of Representatives, and taken a nearly dominant position in debates over state spending.

The broad strokes of an education plan drafted by Sen. John Braun, R-Centralia, also have begun to emerge: at least a half-billion dollars in additional state funding for public schools and a focus on retaining flexibility for local school districts.

For their part, Democratic lawmakers are talking about $1.6 billion for teacher salaries and school personnel in the next two years to meet the state Supreme Court’s mandates under the McCleary decision for better education funding, and Gov. Jay Inslee has proposed some $2.75 billion.

Democrats have complained that Republicans appeared to have started from scratch on their education plan only at the January start of the legislative session. Republican sources contradict that, saying Braun began working on the plan months ago.

State Sen. Mark Miloscia, R-Federal Way, said the dynamic of the Senate is very different than in the House of Representatives, where he served as a Democrat before switching parties. “The House is very hierarchical,” Miloscia said. With the more inclusive approach of the Republican Senate leadership, Miloscia said, Braun and another Republican, Sen. Hans Zeiger of Puyallup, “are literally talking to every member, from the most anti-tax to those that are open to revenue.”

“He’s letting the members decide,” Miloscia said. “It makes you a little slower … but every vote matters.”

Zeiger, chair of the Senate Education Committee and a key player in the Republican discussions surrounding the not-yet-released proposal, agreed, while saying the Senate Republicans’ plan is close to final.

Asked about statements from other Republicans that the budget would include at least $500 to $600 million in new spending on education — although not necessarily from new taxes — Zeiger said the plan would go even further.

“Sen. Braun’s plan is bigger than that,” Zeiger said. “It’s going to be a very bold plan.”

Schoesler was more shy on specifics, but said Braun has worked on the plan for “so long.” Even with the framework in place, though, Schoesler added, small changes have a ripple effect. “Any little tweak is real money,” he said.

Part of the challenge has come from differing philosophies among members on increasing taxes to pay for schools — a divide that, sources said, has been at times a point of contention.

Asked about other sources’ statements regarding that divide, Sen. Maureen Walsh, R-Walla Walla, said that while she personally thinks that some new revenue may be necessary to pay for the package, others are ardently against the idea.

One idea that has been widely circulated among Republicans is a so-called levy swap, where local property taxes are replaced by increased state property taxes. That would address the Supreme Court’s finding that a heavy reliance on local taxes impermissibly favors students in wealthier districts, while at the same time theoretically keeping average Washingtonians' tax bills about the same.

But some in the party, Walsh said, view even that as a tax increase and are against it. Other sources verified the existence of a tension between hardcore anti-tax Republicans and those with more moderate views.

Despite that disagreement, a levy swap is still a significant piece of the new plan, multiple sources said.

Asked about the levy swap, Schoesler hedged. “It’s not exactly a new idea,” Schoesler said. “Some portion of it is possible in any plan.”

Republican leaders, who tend to play their cards close to the vest, have clashed with reporters who’ve asked about the delay in releasing the education plan. Irked this week by one reporter who pressed the question of the plan’s timing, Schoesler snapped, “None of your business.”

Schoesler and the Republican leaders have deftly drawn together their more conservative and moderate members as well as a lone Democrat, Sen. Tim Sheldon of ƒPotlatch. At the same time, the corollary to the party’s wide diversity of political views seems to be that it sometimes starts far from consensus.

As frustrating as it may be for Democrats, however, the decision to work out schisms behind closed doors is clearly a savvy one. The Republican-led Majority Coalition Caucus, which includes Sheldon, has gained a reputation for keeping Democrats waiting while they debate behind closed doors, then emerging to present a unified front.

In another state — or with another leader — the Republicans might meet the same fate that has befallen many a party with a slim majority: seeing measures fail when their opposition peel off a member or two. Instead, by keeping even strident disagreements inside the family, the Republicans run the state Senate — and this year’s budget process, at least so far — with what can seem to be a machine-like efficiency.