City: Next time homeless are cleared, they will get notice 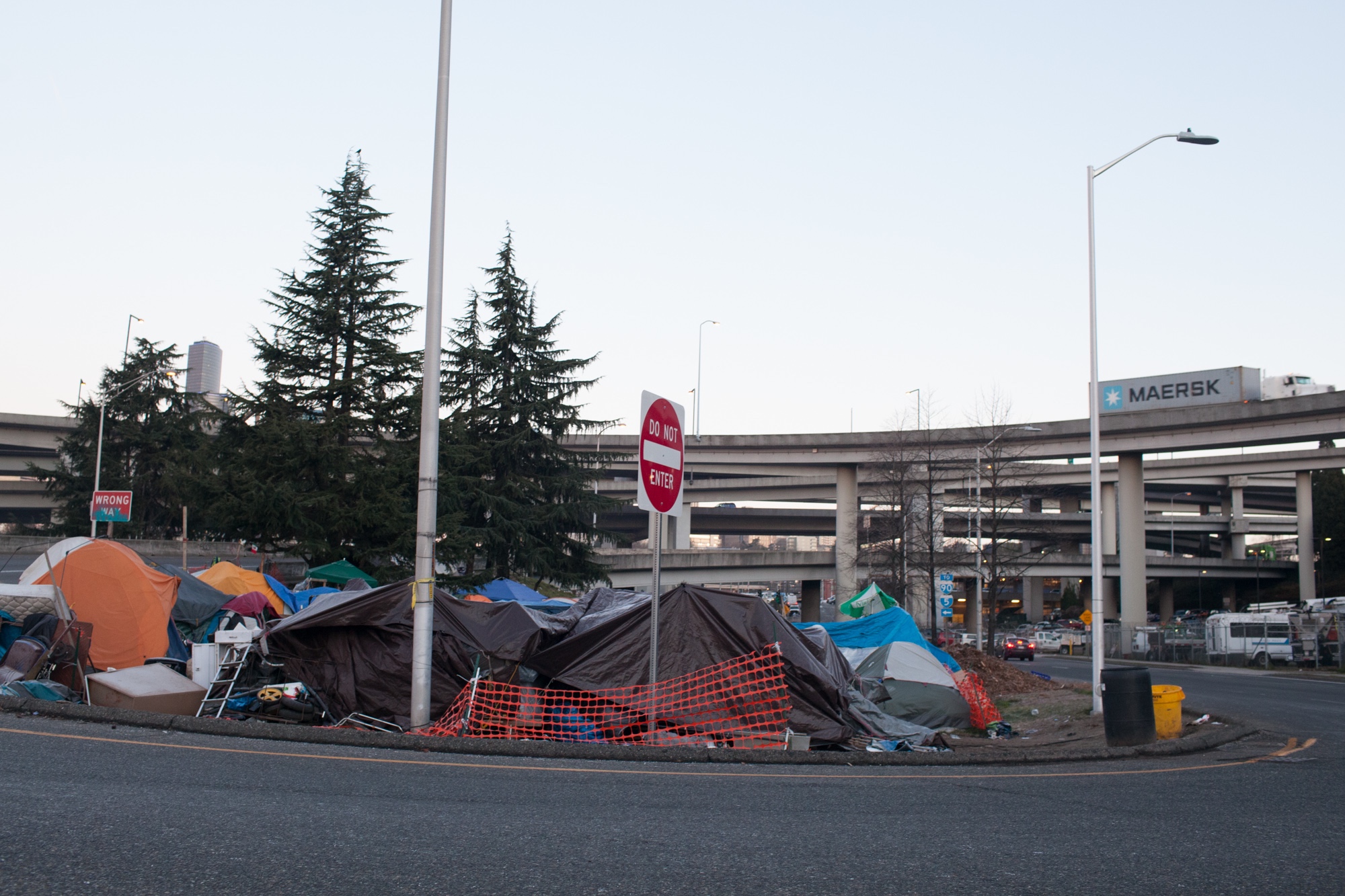 One of the growing number of encampments in Seattle.

The city Tuesday unveiled proposed new protocols for addressing so-called unsanctioned homeless encampments — tent dwellings, sometimes home to dozens, scattered across the city. It’s the first revision of the rules since 2008, the result of public outcry from both neighborhood groups worried about an increase in visible encampments and homeless advocates who see the current procedures as inhumane.

Several groups, including the ACLU of Washington and Real Change newspaper, filed suit against the city in mid-January, arguing the existing rules were unconstitutional.

The draft changes are the result of heated debates that have unfolded over months.

As the number of tent encampments increased and stories about botched clearings — or sweeps — came to the surface, it became clear last year to officials of all political persuasions that something ought to change. But, in the wake of the breakdown last fall of Seattle City Council efforts to enact significant changes, the how continues to be a hot button issue in city hall.

Early proposals from civil liberties groups like the ACLU and Columbia Legal Services advocated for strict definitions of where camping would not be allowed and then greatly reducing the frequency for clearing out any other encampments. The city would also have been required to pay people who were victims of clearings that violate the rules.

That proposal was met with fierce backlash from people, including Councilmember Tim Burgess, who saw it as de facto legalization of camping across the city, a charge the drafters of the legislation denied. Mayor Ed Murray countered the proposal several months later with his own, slightly more conservative legislation that still afforded his office flexibility for when to clear an encampment.

To date, no legislation has actually made it before the council. Tuesday’s announcement is a reshaping of the rules and is only in draft form, subject to change after public testimony.

The new proposals take on some of the thorniest questions surrounding encampments, beginning with where clearing should be prioritized. The existing rules have left that fairly vague. The newer rules would use a database, built through submissions from city departments, to identify “emphasis” sites that should be cleared quickly and kept cleared.

Yurij Rudensky with Columbia Legal Services worries that vague definitions of "emphasis" sites could lead to a scenario where more vocal neighborhoods would be in a better position to argue encampments near their homes should be emphasized. “My question with emphasis areas that will be patrolled a lot more and cleared out immediately is, how is that going to be determined?” he said. “People in more affluent communities might be more likely to pursue the establishment of an emphasis area.”

Julie Moore with the City's Department of Finance and Administrative Services, responsible for the most recent draft, said in an email, "Emphasis areas are places where an encampment has become a consistent problem for the surrounding community," pointing to the space under I-5 in the International District where "campers were having a measurable impact on the neighborhood. The City regularly checks on that area and will ask people to move along before the encampment becomes entrenched again. As far as the process to determine an emphasis area, the City will make a determination based on the totality of the circumstances of the particular location."

The new rules also shape notification protocols, which have been a serious point of concern. Specifically, it’s been obvious that some encampments have not received proper notice and, occasionally, when they do, that timeframe is abridged.

The new rules set a 72-hour notice for encampments not considered immediately hazardous or tagged for emphasis. And if for some reason the city does not arrive on time to conduct a camp clearing, it must post a new 72-hour notice, a response to stories of people assuming, after the notice period had passed, that the city would not return.

Another major point of discussion has been how and when services should be offered to the people living in the encampments and, when that service is offered, how that influences whether or not a person may remain at the encampment. The new protocols would require offers of shelter services to people living in encampments that are not determined to be immediately hazardous or dangerous. These include all forms of shelter, including emergency facilities or temporary housing and must be actually available when the offer is made.

This is another difficult question, however, because many of the people living outside are there precisely because they do not do well in emergency shelters for a variety of reasons, including hours and restriction on pets, possessions and partners. The city's Moore said, "The rules require the City make offers of shelter that would be a better situation than their current situation." However, the definition of "better" could vary significantly depending on whom you ask.

Further, under the newest rules, the city might be able to wash its hands of people who have been denied entrance at local shelters, a point of concern for Rudensky. It’s also not immediately obvious whether the city will reserve space in shelters explicitly for people coming in from encampments. Moore said that "at this time, there is shelter space available virtually every night," adding, "We will also have tighter control over the pipeline of referrals to the additional spaces the City will be providing with the three new sanctioned encampments and the Navigation Center, once those open."

Rudensky said that there are certainly things he said he’d advocate to change or improve, and Columbia Legal Services needs more time to review the rules. In general, however, Rudensky sees vast improvement in the newest draft of rules: “Despite how things went in the fall … I think that there is clearly a movement by the mayor’s staff and office towards our concerns.”