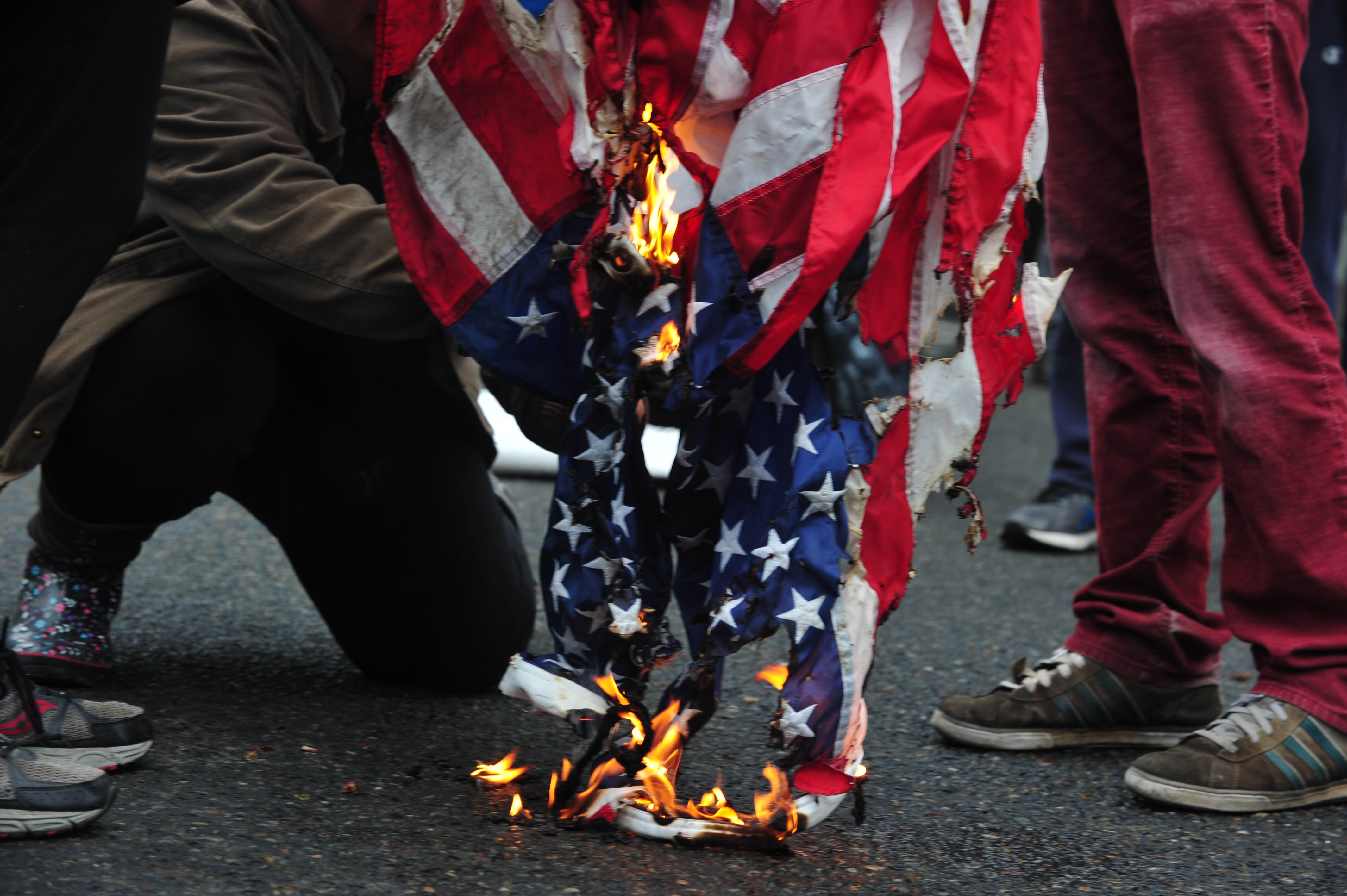 A flag burns in Olympia

Around the intersection the faces were grim, and strangely quiet.

Minutes earlier, the marchers had been loud, rowdy in the performative, almost rote way protests often are in a friendly city. But when the protesters marched into the intersection, spreading out in a loose circle, no one — protesters, police, or even many of the protesters themselves — seemed quite sure what might happen next.

Two black-clad, masked protesters held an American flag by its corners. A third fiddled with a lighter and squirted clear fluid onto the fabric. Passersby stood on the sidewalk and in doorways, arms folded or hands thrust into their pockets, watching. As the first curl of smoke arced upward, there were no boos or shouts, only a collective grimace, and a tense craning of necks to see.

The emotional crux came when a woman barged off the sidewalk and into the circle, stomping at the still-tiny fire. One of the black-clad marchers pushed her off and she fell, but was just as quickly back up.

"I'm just as pissed of as you guys are about Trump being here,” she shouted, face to face with a masked man young enough to be her son, ”but that is not the way to show it."

The scene unfolded at an anti-Trump protest Friday in downtown Olympia, home to the Evergreen State College and one of Washington’s most aggressively liberal cities.

Yet it illustrates the broader predicament facing both the progressive left and those who may be more centrist but voted against Trump: How do they resist a president who has channeled real economic and social concerns into a consolidation of power behind an agenda that is, at best, further to the right than any political movement since the McCarthyism of the early Cold War era?

Part of the answer for the left in general, and the national Democratic Party in particular, will inevitably come from deep reflection on how it managed to lose so much support among the blue-collar middle class. With policies like NAFTA and CAFTA that many of them supported, Democrats allowed the acceleration of movements like the flight of the auto industry from Detroit, and the garment industry from the south. Job creation in cities and on the coasts made up for the losses, numerically, so it was all good — until suddenly it wasn’t.

They will have to see if that self-reflection leads them to policies that may have enough appeal to unite people effectively around a movement that is not just against Trump, but also in favor of a broader prosperity.

Even in deepest-blue Olympia, the marchers were occasionally met with jeers from onlookers, mostly to the effect that protesting wouldn’t change anything. But, underlining the challenges of how to organize effective opposition or even resistance, at least some of those doing the jeering also said that they didn’t support Trump.

One of those was Nicole Yake. Standing with a few co-workers outside a bakery, Yake called out to the marchers that Trump would still be the president tomorrow, whether they marched or not. Blocking the street to protest, Yake said afterward, was inappropriate.

But the question of what would be an appropriate time for a disruption of business-as-usual elicited a long pause from Yake. Finally, she said just that it would have to be something worse than what we’re seeing now.

In the days since the Friday protest, the Trump administration has prepared a barrage of executive orders to support fossil-fuel energy projects; cut off funds to sanctuary cities; and block not only undocumented Mexican immigrants but legal Muslim refugees. So the question of what might provoke a Trump critic into protesting against his policies or volunteering for a cause threatened by his agenda seems likely to loom larger as time goes by. Hopefully, it will also provoke us to refamiliarize ourselves — both on the left and the right — with a deeper question, fundamental to citizenship itself: What are the red lines of morality that must not be crossed?

The flag burning was at once a terrible and a profound thing to watch. My father was a Marine, and my grandfather, also a soldier, carried stories back to this country of walking through the World War II concentration camps. In their bones, they learned firsthand a lesson that we would be wise to remember: Nationalism is an often-ugly force which, when amplified to extremes, is easily capable of overwhelming morality.

The desecration of the flag, likewise, was a visceral and painful confirmation of a central truth: We are a nation that places freedom of expression — criticism and even offensive dissent — above blind patriotism.

In the end, the episode in the intersection ended as it had begun, with tension. The marchers, their moment over, dropped the flag and moved on before the flames were even out. The woman allowed herself to be walked out of the street, and a few cars started to push through the intersection, rolling past the pile of flaming fabric and ash.

A lone policeman rode up then, one who had earlier kept a bored eye on the shouting marchers as they waved their signs. Stopping traffic, he dismounted and looked side-to-side, almost as if chagrined. Then, with a grimace, he stomped at the ashes of the flag until the flames were out.