At UW, students get lessons on homelessness 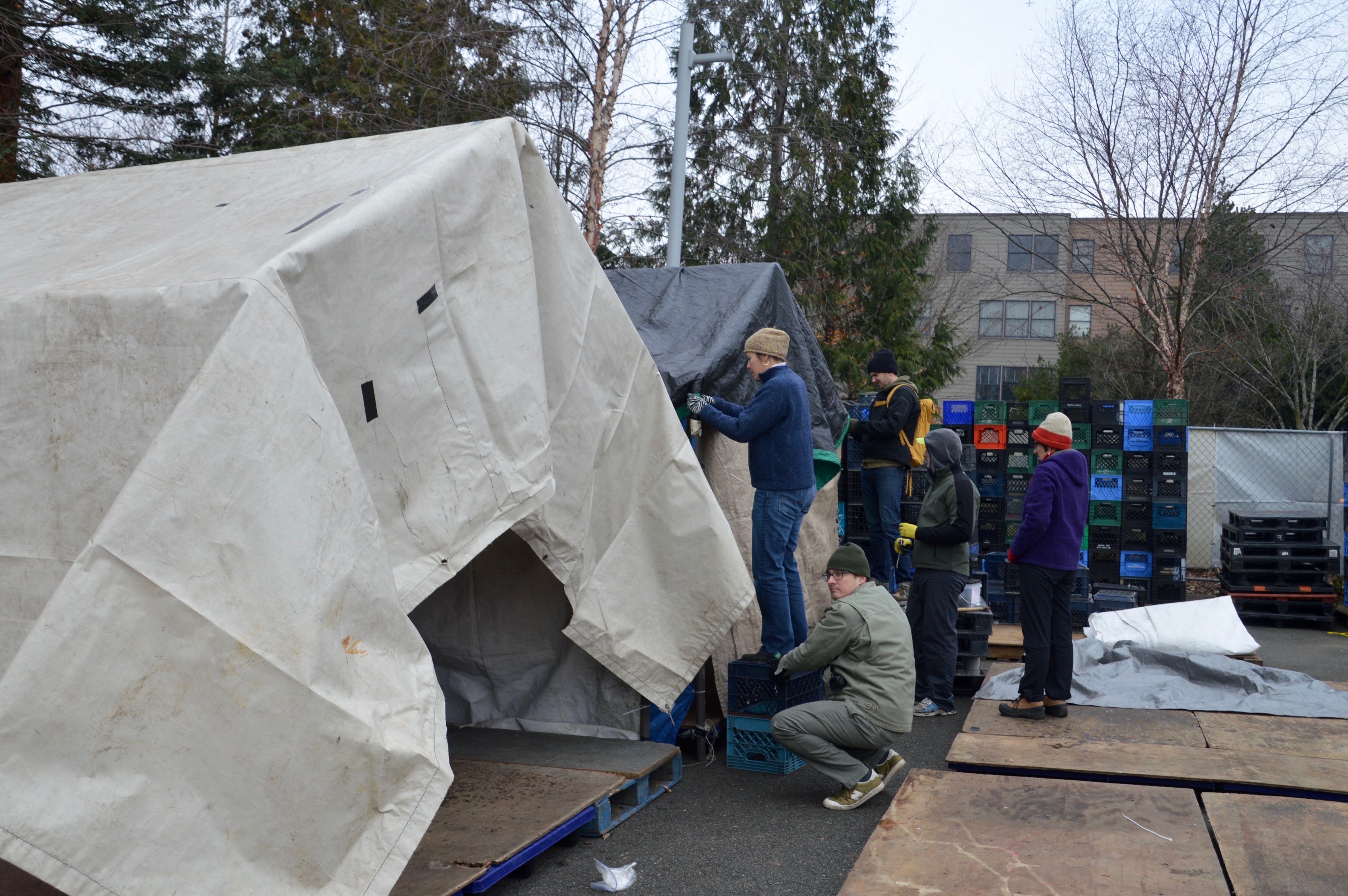 Setting up Tent City 3 at the UW campus. It's on the south part of the campus near a fisheries building and not far from the Ship Canal.

On a chilly Saturday morning, more than a dozen volunteers helped set up a tent city for the homeless in a new spot: the University of Washington campus. As the cold air turned their breath to steam, homeless encampment residents, UW officials and students set up large, tarp-covered tents to serve as dorms, common areas, a kitchen and computer center for the homeless residents of the encampment to use.

Slowly but surely, Tent City 3 is settling into its new home for the winter.

Like the other homeless tent cities in Seattle, Tent City 3 moves location roughly every three months. The stay at the UW promises to be something different: It’s designed to help educate students as well as benefit the encampment residents, and the very first meetings between students taking classes related to homelessness and the campers began last week.

The tent city sits on a parking lot near the south edge of the campus. During the set up, the volunteers and residents hammered together wooden pallets to undergird the tents and protect from the cold concrete of the parking lot. 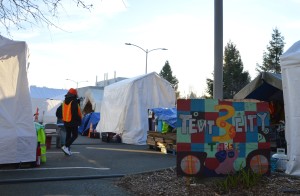 “This is a historic event,” said Olivia Mansker-Stoker, a UW student and volunteer with the Tent City Collective. “An authorized encampment has never been hosted by an institution this large, especially a public institution.”

A basic search appears to confirm this. Two private schools, Seattle University in 2005 and Seattle Pacific University in 2012 and 2014 have previously hosted homeless camps.

A plan approved last June by UW President Ana Mari Cauce, after nearly a decade of advocacy by students, stipulates that Tent City 3 will stay at the UW for 90 days and won’t be funded by tuition or tax dollars. The self-regulating Tent City 3 community has a code of conduct prohibiting drugs, alcohol, violence and weapons, and all residents are screened for sex-offender status. The UW and SHARE, the organization that supports the tent city, developed a safety plan.

Public service is part of the UW’s motivation, as Cauce explained in a letter to the campus community -- even if housing a maximum of 99 homeless people is just a drop in the ocean of at least 3,000 homeless people in Seattle.

But the larger goal is to educate students and enrich their experience. University spokesperson Sally Clark recently said that university faculty had proposed some dozen classes that would engage with the tent city, with at least eight winning approval from the self-governing Tent City Collective. It’s really up to them,” Clark said.

Among the approved courses are an introductory English composition class, a multidisciplinary medical course on caring for those experiencing homelessness and one in oral health.

Professor Victoria Lawson’s honors course, Engaging Homelessness, will cover the history of Seattle homelessness, and the tent city movement. There will be a class visit to the tent city and classroom visits by homeless residents.

Lawson said it’s important “to see students who are privileged taking on the broader questions -- not only of how they might provide immediate daily needs, but also what it is that leads in our society, our economy, our city, to that being a need in the first place.”

For Lawson, “The fact that tent city is here ... gave a sense of immediacy.” 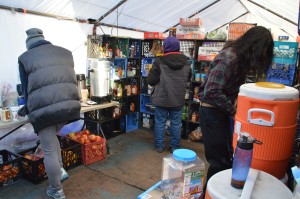 One hundred fifteen nursing, pharmacy, social work and public health students enrolled for a health equity course focusing on how non-medical factors affect the health of marginalized people. Co-instructor Wendy Barrington, a public health professor, hopes that students learn how to get away from the hospital bedside and into the community.

“It’s really to kind of burst the bubble of our experience,” she said. “When we have that lack of connection, it makes it difficult to ensure that people are able to access health and have equitable health outcomes.”

Dozens of students from the class, tent city residents, volunteers and faculty gathered last Thursday evening for a potluck dinner in a large room in the UW South Campus Center. People ate, played board games and talked. At first, many tent city residents and students clustered in groups at separate tables, but later they mixed and talked together. Halfway through the evening, volunteers brought out stations for a foot clinic.

At the potluck, Jason Tavares, who’s lived at Tent City 3 for five months and serves as media coordinator, said UW students have been visiting the encampment, whether to help out or just play guitar and sing with the residents.

Several students at the potluck said engaging with the tent city through class or volunteering is sure to help them in their professional training. “Everyday in the hospital you’re going to have a chance to come across someone who is homeless, whether you know it or not,” said Alicia Placko, an aspiring family nurse practitioner.

Melissa Krell, pursuing a global health certificate and studying to be a pediatric nurse, said engaging with the tent city could teach people in her position to be better advocates for the homeless and other marginalized populations.

Jonathan Tin, a doctoral student in nursing practice, also works in a hospital surgical unit, where he sees homeless people in difficult circumstances, often because of their lifestyles or mental health issues. “This is a really good experience because it flips it around,” he said of meeting with them for the class. “You get to see people at their best, not at their worst, and then you get to realize how similar they are to you as a person.” For him, “that experience is priceless right there.” 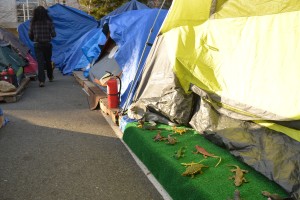 Many involved with the project hope that it will be the start of new things.

“This is what we really consider the first step,” said Josephine Ensign, a UW School of Nursing faculty member who has also worked from the beginning with student advocates of hosting a tent city.

“We’re hoping that it can build momentum,” she said, noting that the tent city has always been a partner in the process.

“I think that people are very good at staying apathetic, giving distance between themselves, but really the true mark of being a nurse or being a compassionate human being is to close that gap,” he said. “I think that this is a good stepping stone. I mean, there are so many people here in the school of nursing that are doing this, it’s their first time interacting with the homeless population, first time closing that gap, taking that step forward.”