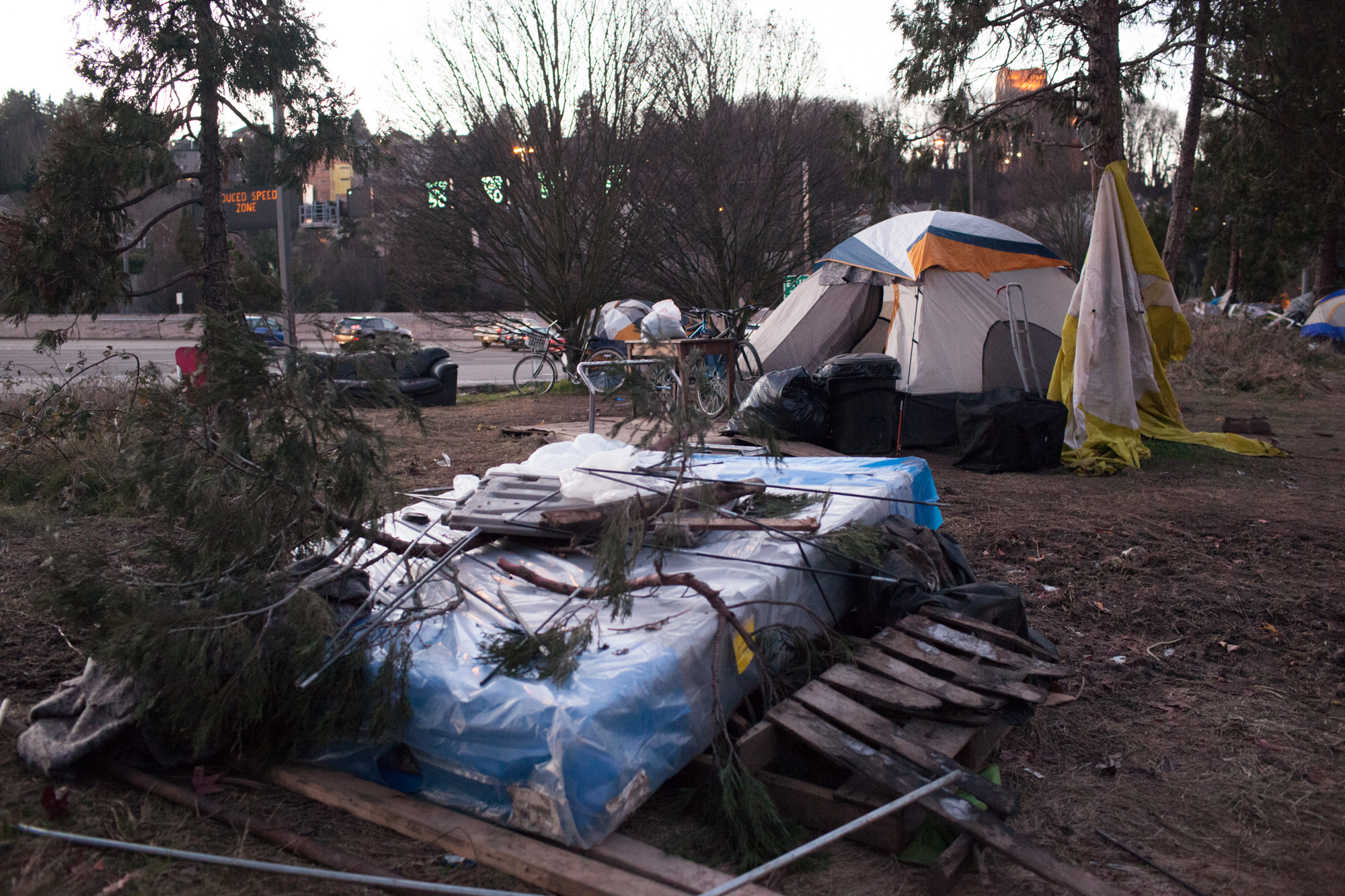 In a complaint filed against the city of Seattle and the Washington State Department of Transportation today, two women with a history of homelessness allege the city's practice of "sweeping" homeless encampments has repeatedly violated their constitutional rights and those of others living outdoors.

The local chapter of the American Civil Liberties Union is representing the plaintiffs, Brandie Osborne and Lisa Hooper, in the class-action suit filed in federal court. The Episcopal Diocese of Olympia and Real Change newspaper, which partners with and advocates on behalf of Seattle’s homeless population, are also parties.

The complaint refers specifically to the city’s approach toward handling so-called unsanctioned homeless encampments — tent sites, often on vacant city or state property, that have lack any permits. This is opposed to the “sanctioned” encampments created as a legal alternative for unsheltered people to stay.

Under consecutive mayors the city has taken to clearing out these unsanctioned encampments, especially ones deemed unsafe. As the homeless population has exploded proportional to the cost of housing, the cleanups have taken heightened emphasis under Mayor Ed Murray.

Murray has made it clear he views the majority of these encampments as a public health and safety hazard and that, therefore, he sees no alternative but to move them.

In theory, residents of the encampments should receive advance notice and city and state workers should show up at set times to begin clearing out encampments. The city’s “multi-departmental administrative rules" currently dictate when and how these cleanups unfold.

But civil rights and homeless advocacy organizations have long bemoaned the MDARs as poorly constructed and even more poorly executed. “The reality is that these sweeps are conducted in a manner that violates Plaintiffs’ constitutional rights and causes them irreparable harm,” reads the complaint.

Stories are plentiful of people coming back to find their things missing, and encampments quickly returning, sometimes within hours. The Seattle Times published a damning five-month investigation of the sweep protocols last summer, which showed a process laden with poor communication, missed deadlines and little progress toward housing the unhoused.

Advocacy groups have long threatened a lawsuit against the city, leaning heavily on federal cases in Idaho and Los Angeles that made it unconstitutional to criminalize homeless people if there was not a concrete alternative. They held off as the Seattle City Council and the mayor’s office considered overhauling the encampment protocols. But that process has stalled. "We’ve seen no change in how the city of Seattle conduct the illegal seizure of property and we’ve seen that those have stepped up," said Amy Roe with the ACLU Thursday. "Given how this is a trend and that nothing’s changed, we can no longer wait."

The suit claims that the current rules unconstitutionally deny people access to items needed for basic survival like clothing, blankets, kitchen utensils and tents. “In addition to using heavy machinery, Defendants [Seattle and WSDOT] sometimes physically destroy property on site, including slashing tents and tarps, and smashing property before removing it,” reads the lawsuit. “Defendants throw away things that they unilaterally determine to be garbage or of insufficient value to be stored. Often these items will be taken offsite for disposal. Defendants also frequently gather up all items — mixing actual garbage with personal belongings — and just leave them in a pile. ... Defendants conduct these sweeps without warrants to seize and destroy property, or permission from the property owners.”

Hooper, says the lawsuit, “has suffered the loss of irreplaceable family photos and mementoes, important legal paperwork, a mattress, clothing, and several shoes — leaving her without a matching pair — because of previous sweeps.”

More specifically, the complaint alleges that residents of the encampments are not given ample notice and that the seizure of personal items ignores due process. “Defendants know or should know that their conduct is unconstitutional and refuse to remedy it,” reads the complaint.

In a statement ACLU-WA Legal Director Emily Chiang said, “Imagine if government agents came to your home and carted away everything you own, without any warning and without telling you how to get back whatever they didn’t throw out. For people living outdoors in Seattle, this horrifying scenario is too often a reality — and has been so for years.”

Kimberly Mills with the City Attorney’s Office said they had not yet seen the complaint and could therefore not comment.

If successful, the complaint would stop the practice of sweeps until protocols change. "We want to stop the illegal destruction of property," said Roe. "There needs to be rules about how the city can take people’s stuff. When it comes to how the city is conducting sweeps, it’s really kind of the wild west."