How to deal with fascists -- lessons from history 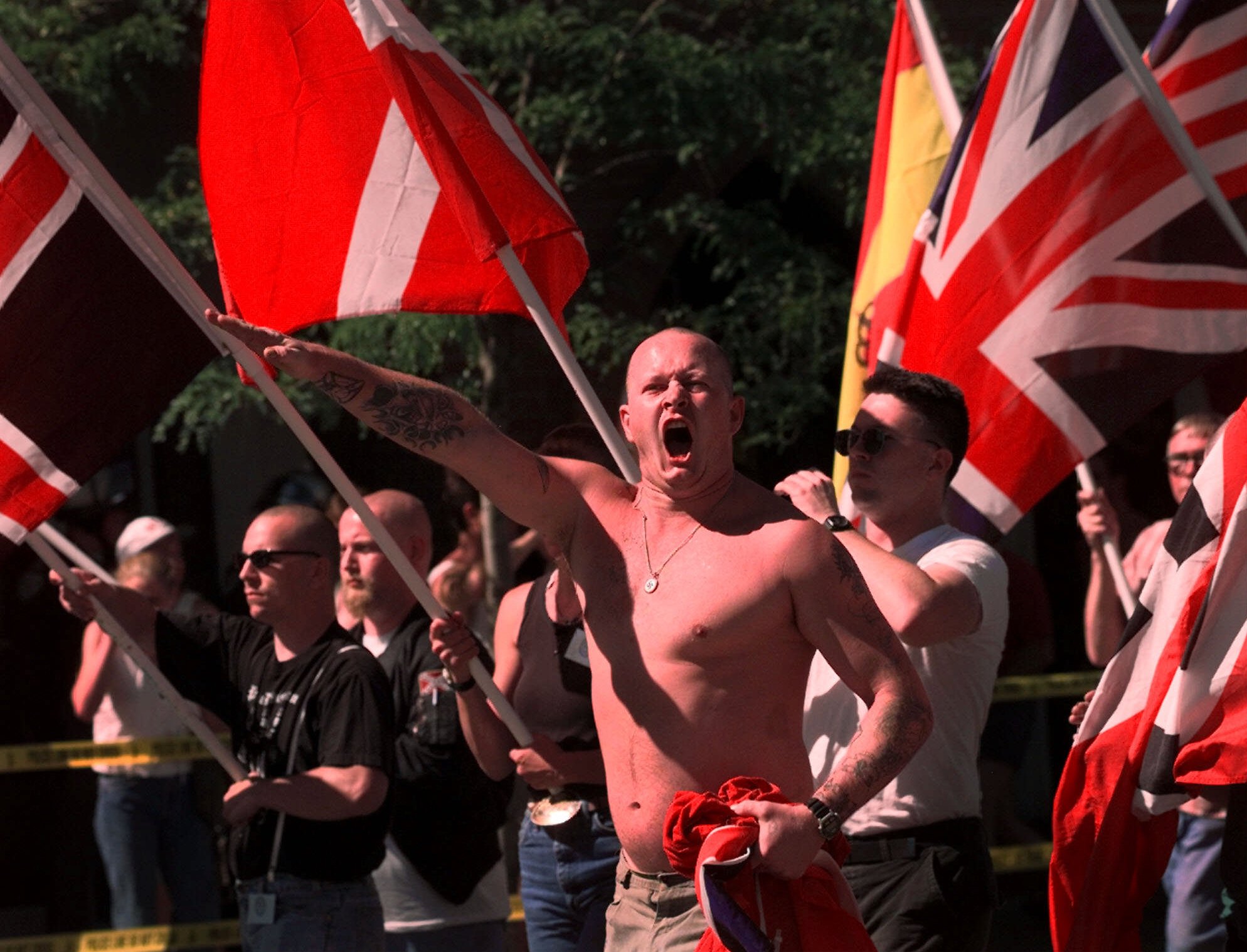 Karl Wolf raises his arm in a Nazi salute as he marches through the streets of Coeur d'Alene, Idaho, Saturday morning July 18, 1998.

The so-called “alt right” is feeling its oats. With Donald Trump about to assume the presidency, white nationalists, supremacists and Neo-Nazis are newly empowered.

Take Whitefish, Montana, the resort town near Flathead Lake that is the part-time home of Richard Spencer, the originator of the term “alt right.” Spencer recently gained national attention when he gave a speech in Washington, D.C., using Nazi phrasings and during which his supporters made the Hitler salute while shouting “Hail Trump.”

Responding to what they claim is harassment of Spencer’s mother, who also lives in Whitefish, the neo-Nazi website Daily Stormer called down a “Troll Storm” on some members of the town’s Jewish community. They also announced plans to hold an armed march through Whitefish on Martin Luther King Day. They have applied for a special event permit for what they call a “James Earl Ray Day Extravaganza,” named for King’s assassin.

The proposed march has been widely condemned by Montana’s officials, Democrats and Republicans. The local group Love Lives Here responded with a Love Not Hate gathering “to celebrate diversity and take a stand against racism and other forms of oppression.” And it’s unclear whether the march will actually happen, or is just designed to generate publicity — to make an impression for the Neo-Nazi brand.

Nonetheless, the Whitefish conflagration raises the question of how best to respond to fascism. Does media coverage of such events give hate groups legitimacy by publicizing their extreme views? Would ignoring them only allow them to grow stronger?

While things were different in many ways, looking back to the 1930s for examples of how people pushed back against domestic fascist groups, especially on the West Coast and in the Pacific Northwest, gives some perspective. Here are examples of anti-Nazi tactics used in that era.

After Hitler came to power in Germany on 1933, fascist groups sprang up around the world. In Seattle, German-American activists embraced Hitler’s regime and celebrated the New Germany. Nazi swastikas flew from consulates, ships and often at German community events.

Labor, socialist, communist and Jewish groups took the lead in pushing back. Picketers greeted German vessels visiting U.S. ports, including Seattle and Tacoma. Protesters blocked and occupied speaking halls and dumped anti-Hitler leaflets on audiences. In San Francisco, a U.S. sailor climbed the exterior of the German consulate and tore down a Nazi flag. In New York, a riot erupted when protesters boarded the German luxury liner Bremen and did the same. Anti-fascists did not want to see the Nazi flag normalized.

A visible example of local protest occurred in 1934 at what is now the Egyptian Theater on Seattle’s Capitol Hill. A group of women infiltrated an event that included pro-Hitler speeches and dumped anti-German leaflets from the balcony. Another example: Protesters dropped leaflets featuring a wanted poster of Hitler from a low-flying airplane onto a huge celebration of Hitler’s birthday in Los Angeles in 1939, organized by the West Coast branch of the pro-Nazi German-American Bund.

Protests to stop fascist speakers sometimes became violent, especially in places like New York and New Jersey, where groups like the Bund — and their opponents — were strongest. But fists flew elsewhere between fascists, protesters and the police. A fight erupted outside that Egyptian Theater (then known as the Masonic Temple) during a protest in 1934; three “reds” were arrested. Another fight occurred at a Silver Shirt speech in Spokane.

In Chicago in 1938, a series of three or four Bund and Silver Shirt events were interrupted by a “vigilante” group of young, twentysomething Jewish toughs who sought to break up meetings and break heads. According to a newspaper account of one encounter that resulted in eight arrests, “One hundred police battled the rioters more than an hour before they were dispersed. Bricks were thrown, smashing windows in the meeting building, and fists, sticks and stones wreaked painful but apparently not serious damage on many battlers.”

Violence erupted again in that city during a speech by pro-Hitler Silver Legion organizer Roy Zachary of Snoqualmie, Washington. Zachary was walloped on the head for calling for the armed overthrow of the American government to bring in a fascist Christian Commonwealth. He was charged by police in the melee, but skipped town with a bandaged noggin.

In the late 1930s, the FBI began to take more seriously the potential threat of pro-Nazi groups in the U.S. Agents infiltrated the German-American Bund and built cases for sedition and other crimes against key members. Activists and journalists did so earlier. In Portland, the Anti-Defamation League sent observers to local Bund meetings and provided written minutes of what was said and discussed there. Other observers wrote down the license plate numbers of attendees.

In Seattle, Jewish writer Dan Swett went under cover and joined the Silver Shirts — a domestic Christian fascist group led by the charismatic William Dudley Pelley, who ran for president in 1936 with Washington state as the home base of his Christian Party. While Pelley had an extensive publishing operation that spread his anti-Semitic, pro-Hitler and Aryan-Christian theology widely, the internal operation was highly secretive. Swett got inside the Seattle office and described the hateful views and weird personalities of the Silver Shirts. His series was syndicated in Jewish newspapers across the country.

The most famous case of undercover reporting was the Armenian journalist/activist Arthur Derounian, who infiltrated the right-wing underground of the 1930s, claiming to be an Italian fascist sympathizer, and later wrote the bestselling 1943 expose “Under Cover” under the pen name of John Roy Carlson. It documented the extent, complexity and secretiveness of right-wing and pro-fascist, anti-Semitic and racist hate groups in the U.S. In the age before the Internet, he linked P.O. Boxes and pamphlets and unadvertised meetings to a whole web of such organizations, and documented the groups' strategy to wrap fascism in the cloak of “Americanism.”

In a chapter titled “The Hate Crusade,” a speaker at a Crusaders for Americanism event said, “Our idea is to sell nationalism to the people first. It’s easier that way. Once we sell it to the mob, then the big boys will swing around.” In other words, first nationalism, then fascism. The “alt right” couldn’t have put it plainer.

The Bund went all in attempting to co-opt Americanism. One tactic was to exclude non-U.S. citizens as members. At perhaps the biggest and most visible U.S. fascist rally ever, at Madison Square Garden in New York in 1939, a giant portrait of George Washington hung in the hall before some 22,000 attendees. The event was a “celebration” of Washington’s birthday. Protesters and the media were ejected from the hall, including writer Dorothy Thompson, whose husband, Sinclair Lewis, had written the 1935 novel “It Can’t Happen Here,” in which a Huey Long (Trump?) populist-fascist figure becomes president and turns the U.S. into a totalitarian state.

Eventually, the conservative American Legion and other veterans groups joined the opposition. Legionnaires, many of them World War I vets, began showing up to protest fascist rallies. A group of Legion members were beaten at a Bund gathering in New York. By the late 1930s, more mainstream patriotic groups opposed groups like the Bund. The 1939 Hollywood thriller “Confessions of a Nazi Spy” captured it well. It features a scene at a German-American Bund meeting where a Legion member, played by Ward Bond, stands up to the Bund as patriots reclaim Americanism for mainstream Americans.

During the ‘30s, political groups, committees and pressure groups emerged, disappeared, cooperated and competed. But when Jewish groups, the American Legion and labor stood against fascism together, it helped advance the anti-Nazi cause. When Congress added fascists to their longtime investigations of Communists for “un-American” activities, it gave new muscle to the anti-fascist efforts. Those investigations did reveal illegal activities — the head of the Bund was convicted of embezzlement — but also exposed structural weaknesses in many of the far-right groups, which were often cash-starved, poorly organized or managed, and fraught with internal rifts.

Some of the groups folded following Pearl Harbor, when public sentiment turned against the Axis Powers, catalyzing and unifying much of the country. Other groups simply reinvented themselves without the baggage of Hitlerism and reemerged as anti-communist groups in the ’40s and ’50s. But organizations lobbying prosecutors, politicians and the media to take fascism seriously made slow, steady progress.

Today, scholars debate how important or significant groups like the Bund or Silver Shirts were in the grand scheme of things. Some look like much smaller threats in the rearview mirror. Others loom as scarily familiar.