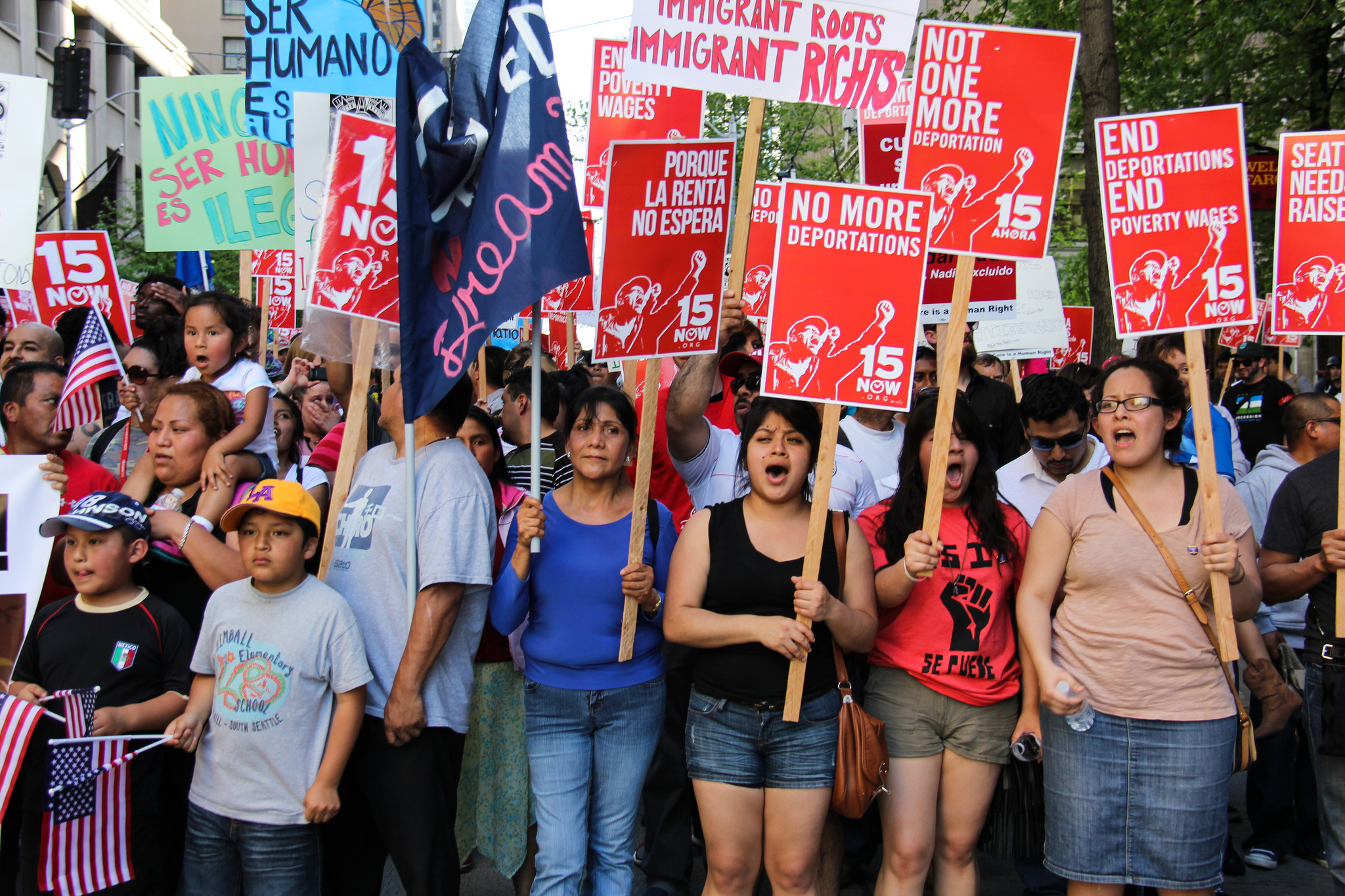 A 2014 May Day rally in Seattle emphasized workers' rights and protection of immigrants.

Within the local labor movement, we often joke that they should move AFL-CIO headquarters from D.C. to Seattle, because this is where workers have learned to ask for what we really want. And it's where workers are committed to fight until we win it. Now facing a Trump presidency, perhaps we should divest all of American progressive politics from D.C., bringing it to Seattle. Workers need a power center to stand against the “anti-worker Trump hate-machine.”

In the last year, we’ve been building a worker-centric populist agenda in the region to contrast with the right-wing populism that delivered a Trump presidency. In the 20th century, it was unions that ensured American workers made living wages and had a high quality of life, not the right wing. It is the unions and progressives that are delivering a successful populist agenda in our region today. Trump’s right-wing populism is just a campaign promise. It’s going to be easier for him to come through on his hateful rhetoric during the campaign than on high-wage jobs.

It’s up to us to keep the progressive momentum going in Puget Sound. When the drivers at Uber and Lyft formed the App Based Drivers Association in partnership with Teamsters Local 117 to stand up for themselves as the tech market tries to erode worker rights, they rocked the international media. Here was a perspective so personal and real, and proof that an institution like the Teamsters, who’ve been around so long that they have a horse in their logo, can adapt and be at the tip of modern equity movements. While the Teamsters resourced a movement of mostly people of color, mostly immigrant drivers, the Democratic Party nationally continued to prioritize its relationship with wealthy donors.

It was nightmarish to see David Plouffe, who helped elect President Barack Obama and remains a top influencer in the national Democratic Party, show up in Seattle on the Uber payroll to try to shut down the Uber and Lyft drivers’ effort to form a union. You can’t win workers’ hearts and crush them at the same time. That’s a conflict of interest, it’s hypocrisy, and it lost Hillary Clinton the presidency.

Trump was able to appeal to desperate workers, as desperate in the deindustrialized Mid-West as an Uber driver living in Yesler Terrace, and to say that Clinton and the Democratic Party are elitists who don’t care about working people. Take that and add white supremacy, appealing to people’s darkest fears and desires, and you have the right-wing populist platform that won the presidency.

The Democrats are a party in crisis, a fixer-upper, ours for the taking. If you are a worker, an immigrant, a civil rights activist, an environmental freedom fighter, it’s time to take the Democratic Party back from the likes of Uber. David Plouffe can go become a Republican, and we can reboot this party in King County and spread our inclusive vision of progressive populism, the true counter to elitism.

Puget Sound can provide an alternative, and it’s time to step it up and show American workers how to win. On the solidarity front, that means fighting for paid family leave in 2017, for all workers; it means stopping deportations, religious registry, hate crimes. Anyone who engages in this kind of fascism in King County must meet opposition from organized labor. As the Trump alternative, we are engaging union climate scientists from UAW Local 4121 at the University of Washington to educate workers on climate change and what policies workers should support to keep carbon out of our atmosphere and make sure the transition to a clean energy economy includes justice for workers and their communities.

Construction growth also needs to be inclusive and create apprenticeships for people from all walks of life. This is accomplished through community workforce and community benefit agreements, and targeted local-hire policies. In the tech industry, every tech worker — from those writing code to those delivering Amazon Prime packages — deserves an outlet where they can push for their needs on the job.

Trump won. He told just enough people in just the right places that they constituted a “forgotten working class” and that he would have their back. It’s true that enough white people got their fears stroked just right and voted for this guy, but there is no “white working class.” The working class is made of people from every race on earth, we speak every language, we do every kind of job imaginable. We drive the bus, teach the kids, heal the sick, make the airplanes, build the bridges, and so much more.

Let’s continue to be aware, united and aggressive in Puget Sound and let the rest of the country see how it’s done. Then we can wake up from this nightmare in four years with the momentum to face the future with dignity and ambition.

Nicole Grant is the Executive Secretary-Treasurer of the Martin Luther King, Jr. County Labor Council, AFL-CIO, an organization representing over 100,000 workers in many different industries across King County, and an electrician by training.