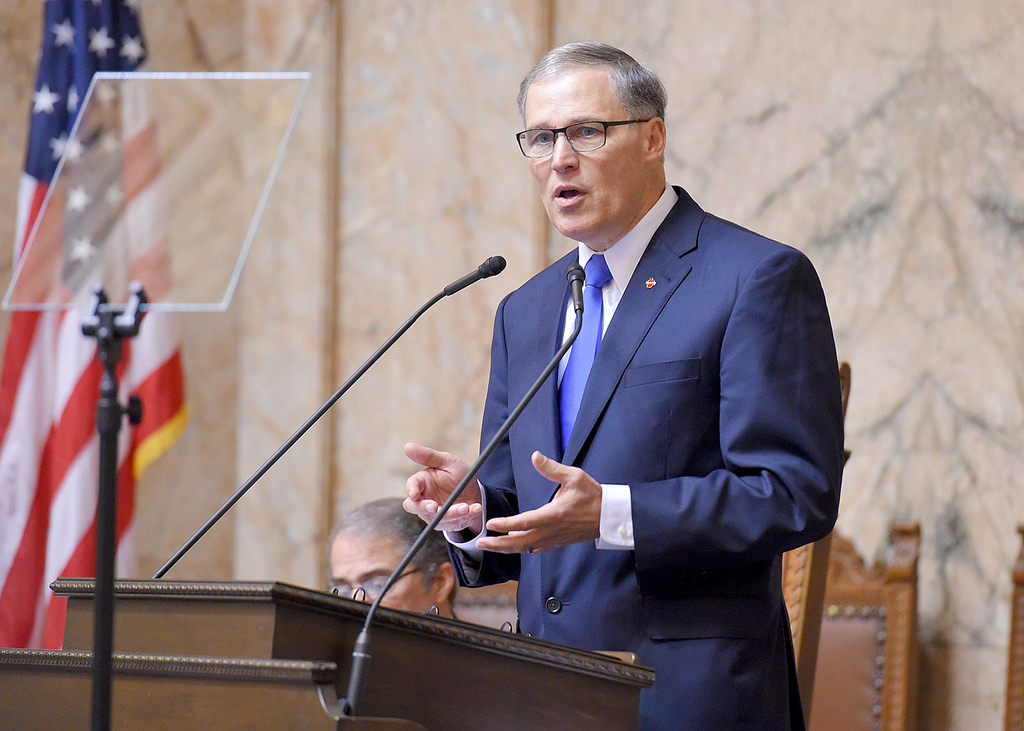 Gov. Jay Inslee delivering his 2015 State of the State event.

Gov. Jay Inslee today gave a spirited defense of his tax plan for the state, while vowing to resist any major changes by the Trump administration on immigration and health care.

Just after being sworn in for his second four year term, the Democratic governor delivered his State of the State address to legislators, state Supreme Court justices, other officials and a packed legislative gallery.

Speaking of his budget, Inslee pointed to widespread reductions in property taxes around the state that would come out of it, and painted its proposals for new taxes — a capital gains tax and a carbon tax — as moves toward reforming a regressive tax system

In defense of his budget and its attempts to finally meet the full education funding improvements demanded by the state Supreme Court, Inslee turned to an extended mountain metaphor. “The journey to fully fund education in our state has been a lot like climbing a mountain,” he said. “And we’ve been climbing together for a long, long time.”

Washington’s McCleary funding crisis stems from state Supreme Court rulings that the state must cover the cost of providing a basic education to every student in the state. Currently, much of the cost of operating schools, including a significant portion of teacher salaries, is paid by local school districts, who fund themselves mostly with local property tax levies.

Inslee in December proposed a budget that included billions in new taxes, mostly from a re-write of the state’s business and operations tax code that would exempt some small businesses but increase taxes on white-collar professionals. Also included in Inslee’s budget are the new capital gains and carbon taxes.

Inslee pushed back against the idea that he was pushing a tax hike package. Instead, he pointed to the reductions in property taxes many households would face under the plan, as a result of school districts being able to reduce their local levies.

Later, referring to President-Elect Donald Trump, Inslee spoke of defending the state as a “refuge” for refugees, as well as finding a way to avoid ending benefits extended under President Obama’s Affordable Care Act, which Republicans have vowed to repeal.

Stopping short of any mention of the pledges made by cities in the state, including Seattle, to remain sanctuary cities for immigrants, Inslee said the state would remain a safe haven “for those who come here in search of safety and refuge.”

Republican legislators were notably quiet during that and a few other mentions by Inslee of potential threats from the new national administration. Although they joined in spontaneous applause when Inslee mentioned fighting the state’s opioid crisis, they remained silent as Democratic legislators and most of the audience in the room’s viewing gallery clapped at mentions of protecting women’s access to reproductive healthcare.

Inslee also said that the state would fight to protect coverage for the estimated 750,000 Washingtonians who gained health care under the Affordable Care Act.

As the biggest speech of the year, big ideas, big promises, and few specifics are par for the course — leaving open how he and the Democratic majority in the House will make it all happen.

Republican legislators responded shortly after Inslee’s speech in a press conference just off the floor of the state House. While saying they didn’t disagree with all of Inslee’s remarks — they specifically cited vocational and technical education as well as improvements to the state’s mental health system as points of agreement — they took issue generally with his approach of paying for improvements in the state with higher taxes.

House Minority Leader Dan Kristiansen, R-Snohomish, said he thought Inslee’s goal of fully funding the court’s education mandate could be achieved during the regular legislative session that started Monday.. But, Kristiansen added, “To use his analogy about getting to the top of the mountain, there are several paths we can take.”

Pressed on why they remained quiet during Inslee’s references to the state holding its ground in the face of federal changes on reproductive health care and immigration rules, Kristiansen and Schoesler said they aren’t convinced Trump will actually enact policies that harm the state.

“The governor focuses on scaring people,” Schoesler said later. “The president-elect has said there are some popular parts [of the Affordable Care Act] that he’d like to keep.”