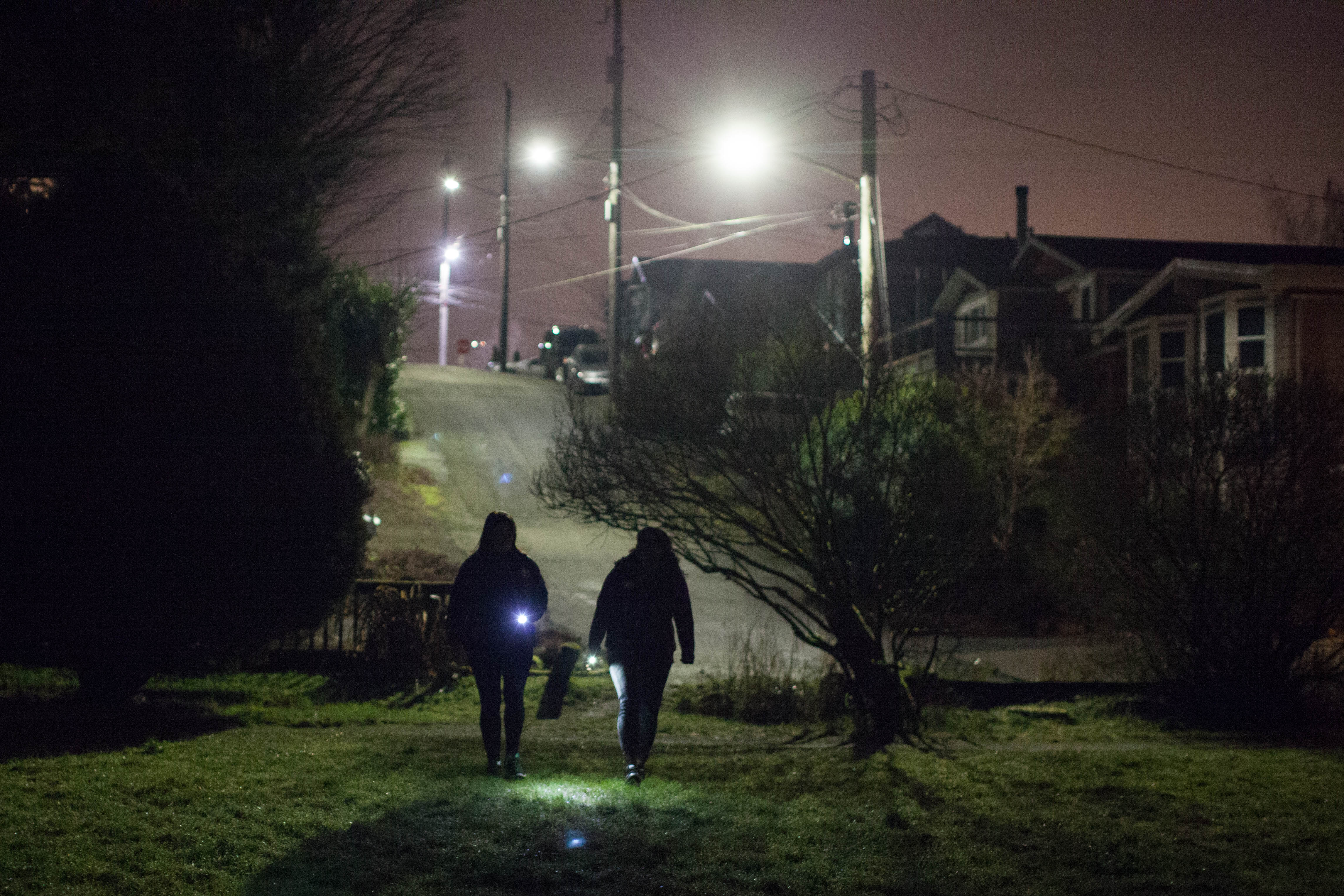 Michelle Bretz and Dear Garcia-Stubbs, both childcare providers by day, search Dahl Playfield in the Roosevelt neighborhood during 'Count Us In', King County's annual survey of people experiencing homelessness.

How does a city know the number of homeless on its streets? It counts.

Early Friday morning, thousands of volunteers fanned across Seattle and King County in cars and on foot to ferret out those living in doorways, in cars, in parking lots, beneath highways and in the green spaces near Puget Sound — all part of the annual accounting of the region's homeless. The grim tally, required by the federal government, is known locally as Count Us In.

By 1:45 a.m., the Compass Center beneath the viaduct on Alaskan Way, a resource center for the unsheltered, was packed with volunteers, ranging from preschool workers to politicians and corporate executives. Organizers scrambled to sort the mass into small teams, each to be deployed to different parts of the city. “Wedgwood!” one organizer shouted. “Who wants to go to Wedgwood?”

The count this year was different from years past. Previously, it was overseen by the Seattle/King County Coalition to End Homelessness, an advocacy organization. This year, All Home, a coalition run by King County, took the reins, working in partnership with Applied Survey Research, a California-based research firm. The hope was to create a more intentional methodology and combine what had been several different counts, of youth as well as people in shelters and cars, into one.

Every year prior to this one, the organizers would release a count almost immediately. Advocates would spend the following morning banging a gong outside City Hall for every person counted. This year, the numbers will not be released until spring.

Felicia Salcedo with All Home explained that it will take several weeks to crunch the numbers and to tally young people and those in transitional housing and emergency shelter. In past years, she said, if counters found a car that appeared occupied, they would automatically add two to their count. This year, employees of local shelters will ask their clients whether they sometimes stay in their cars. The final number will be the average of the Friday morning count and what the shelter workers have found.

Also new this year was the heightened presence of guides, many of them formerly homeless people who know the hidden corners of the city and where, when they were living outside, they would have spent the night.

Oz Palmer, a sturdy man wearing pink earbuds and a warm cap, escorted a group of three women — Queen Anne preschool teachers Keara Garcia-Stubbs and Michelle Bretz, and Zillow executive Rebekah Bastian — to the Roosevelt area, north of the University District, between 65th and Lake City Way. Palmer’s expertise comes from his past work. After serving in the Gulf War in the 1990s, he got involved with broader surveys of homelessness and recidivism, something he began as a student at the University of Oregon. He did that outreach all over the place, including in Seattle.

It had been awhile since Palmer was in Seattle and, on Friday morning, he felt his knowledge of the area was a little rusty. Still, there were certain things only he seemed to know. As his group finished searching a Roosevelt area park, he pointed west, up a small hill, and said, “There’s a garage up there that people like to sleep in.” He had discovered the spot while driving around the city.

The count felt informal. Palmer’s group spent most of its time driving, slowing near an old truck, a rusty Mustang, a VW van, to check for condensation on the windows. If they had reason to think someone was inside, they noted the last four numbers of the license plate. But it was cold and a little misty and almost every car’s windows were fogged, which made it hard to tell what was the result of breath and what’s not. The group wondered how this might affect the final tally.

Informal as it may be, the number the city receives drives policy. The homeless question has been more discussed than any other issue in City Hall. Seattle has been under an official state of emergency over homelessness since November 2015.

And the numbers have jumped significantly in recent years. In 2015, volunteers counted 3,282 people sleeping on the streets. Last year's count turned up 4,505. Add the people who sleep in emergency shelters and transitional housing, and homeless estimates surpass 10,000 countywide.

Organizers expect this year’s number to be higher yet again. Part of that, they’ve said, is the heightened quality of the methodology. But the hunch is that the number would have gone up regardless.

As Palmer’s group circled, their findings were sparse. They were all there to help — Bretz and Garcia-Stubbs’ made New Year’s resolutions to volunteer more, and Bastian runs a program with Zillow to find low-barrier rental housing — so there was a small twinge of disappointment that they had not found more people. But, they remarked, hopefully that was a good sign.

Even with the addition of more guides, it will be hard to tell if the numbers are accurate; searching for people makes you realize just how many small corners the city has and how difficult it would be to find them all.

But as the city and the county look to change how they face homelessness, it’s perhaps most important to watch the baseline. As systems change, how will that ripple through the streets, and shape the count that will be repeated, once again, 12 months to come?

How to use this map:

This interactive map shows you the route and photographs taken by producers during the Count Us In project.

Click on a marker to view the picture at that location.

This is visible during transitions. */