In Obama's farewell, a hint of something new 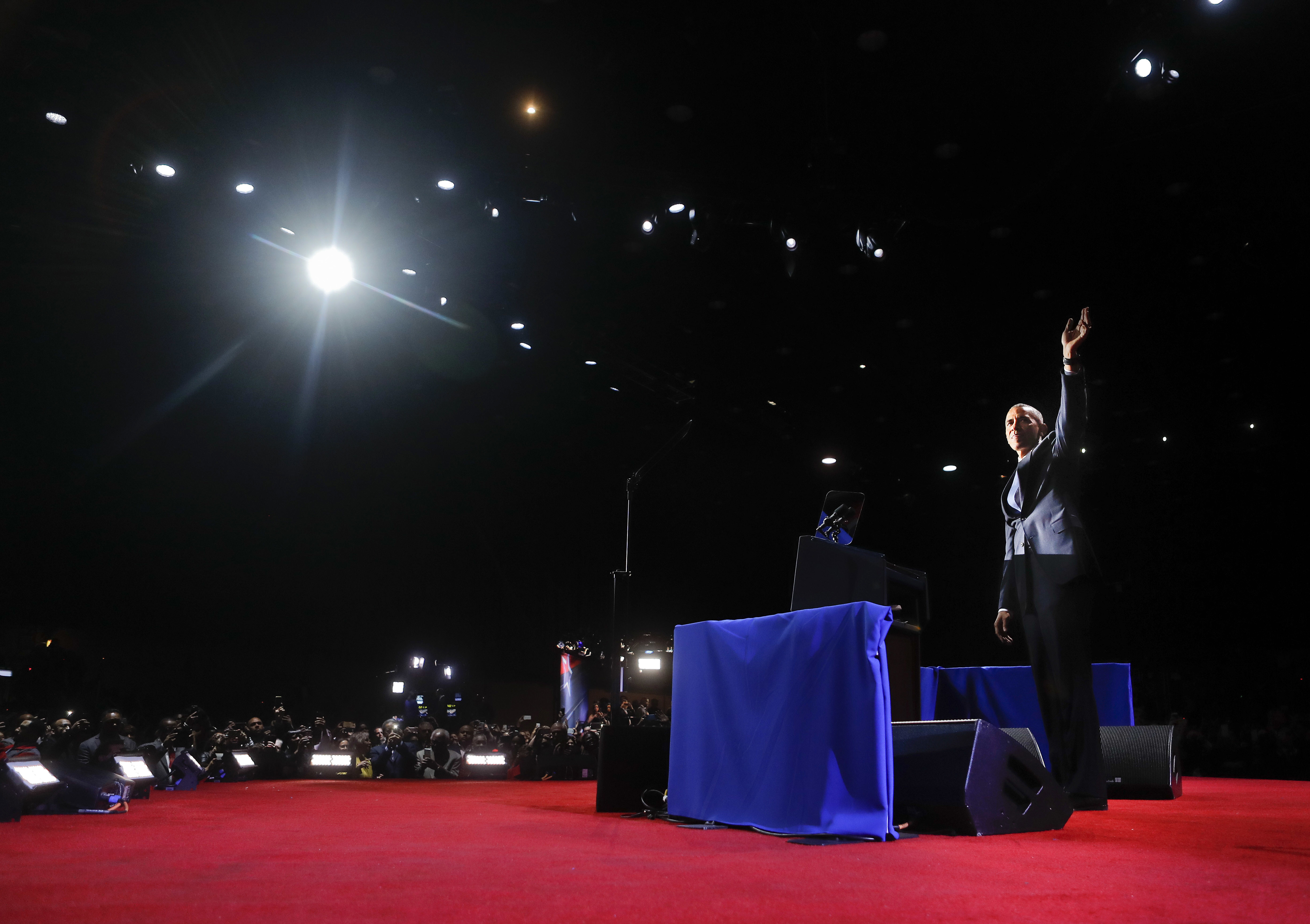 President Barack Obama waves as he take the stage to speak during his farewell address at McCormick Place in Chicago, Tuesday, Jan. 10, 2017.

The first artifact of the new year, then, will be a tweet by the outgoing President. It is a medium uncharacteristic of Barack Obama but characteristic of the times: spastic, surface-level, shifting. The President-elect, his spawn, a press all too willing to treat Donald’s frenetic broadcasts as indicative of policy prescription or dialogue — yes, they are modifying the function of an already cancerous political Twitter, giving a melanoma more sunlight. For now, though, behind the still somewhat sacrosanct lectern that is the POTUS handle, the President tweets. He invokes the privilege of the presidency, his eagerness to rejoin the citizenry. It is January 1. “Happy New Year everybody.”

How does one read this last sentence? Literally — what emotional valence does it carry? What is its timbre? What is its subtext? I can’t help but look at the dull, flat period at the end of the tweet and see resignation buried under the grace. I will have a headache until 8 p.m. that day, a headache that feels like this period.

There’s a bracelet from Xian on my wrist: a navy blue Livestrong-type imprinted with RESISTANCE. Brushing my teeth, I scoff as it catches my eye in the mirror. Foamy toothpaste on the counter. What am I resisting again? Slacktivism? Have I reached this level of self-caricature so early in 2017? I take the toothbrush out of my mouth and call it good even though I haven’t done the top row yet. A line from an essay about dinosaur bones comes to mind: “It’s weird to be tired at the beginning of something.”

I stay here for a while, in the bathroom, seated, back against the door. The house is empty, and this room is the only one I’m heating. A new year, huh. On the other side of a pink rug: the toilet looking at me somewhat expectantly, its lolling lid a reminder of the things I need to clean. Right. Something about getting one’s own house in order before — what? RESISTANCE? Can you clean a gentrifying house?

There is not so much new here.

A really awful moment, just then, on the NPR Politics Podcast. They’re talking about Russia. Domenico Montanaro: “Doesn’t the U.S. hack a lot of stuff to influence elections in lots of other countries anyway? Am I wrong to ask this question?” The question, resoundingly valid — the first dissident thing I’ve heard that day — is deftly explained away by the other hosts. The U.S., the CIA, yes, perhaps they have had “an interest in nudging.” Someone cites Nicaragua; someone euphemizes the cases as instances of “weighing in” (and only on elections in “adversarial countries”). An apologetic counter-question: “Not to split hairs here, but how often have we done this in established, first-world, advanced democracies?” The gall. I hit the pause button.

A flick through social media: casual racism, casual misogyny, casual food-stamp fraud; all from white progressives and a social-network algorithm engineered to present me with views like my own. Don’t they see? Don’t we see. I walk out of the house to a cold snap.

The next I hear from the President is his farewell speech in Chicago. It is January 10. “My fellow Americans,” he begins. How many times before?

The President is nothing new up there, but he feels temporarily renewed — younger behind the podium, leaning on it with an ease I haven’t seen from Obama in years. He seems relieved: ready to call it a day, perhaps. Call it a presidency.

He speaks of Chicago, the city that taught him the meaning of change, that glimmering, fickle thing that “only happens when ordinary people get involved, and they get engaged, and they come together to demand it.” The city was his tutor, he reminds us.

I’m alone in my room, orange tea in mug, staring a little too blankly at my monitor. What is it I’m feeling now? Ready for change? Obama, you rascal, don’t you dare try to spin this year as one of hope. He is doing the thing where he is simultaneously too close and too far removed.

I think of George Blaustein writing on the Obama speeches in n+1: Perhaps, he suggests, we can resolve the contradictions inherent to critique of his speeches if we “see Obama not as a politician but as a narrator. Narrators in novels have a similar command over intimacy and distance.”

“The work of democracy has always been hard,” says the President.

“Has it always been this hard?” I ask.

The first mistake I made in 2017 was to continue to be surprised by today’s political climate. I think of Ijeoma Oluo writing the morning after the election:

We did not even swerve. We stayed on that road that we paved hundreds of years ago and we gunned it. … Do not think that you woke up today in a different world. You woke up in the same white supremacist patriarchy that you’ve been waking up to your entire life. Know that this is why our country is the way it is.

Obama speaks to why our country is the way it is, to race, during his farewell. In his speech, the divisions fostered by the construction of race are a “threat to our democracy.” They are “as old as our nation itself.” No, there is no newness here, either. “After my election, there was talk of a post-racial America. And such a vision, however well intended, was never realistic.”

He never quite tells us what is realistic, though. He tells us what needs to be done but is careful not to suggest what might actually come to pass. I think of reading resignation between the lines again, resignation at the ends of his sentences.

Just there: the veneer of optimism. It’s in his cadence, his brushstrokes of presidential accomplishments, his relentless idealism. Beneath the surface, though, a break. The only real hope he expresses in the speech is with respect to the future generation: “You'll soon outnumber all of us, and I believe, as a result, the future is in good hands.” What of the present?

No, says the President, there isn’t much of anything new here. We do not live in extraordinary times. The name of the newness will not be hope.

And yet. There is a kind of newness elsewhere, and it is tucked away in how he talks about Chicago, about citizenship. It is not temporally new, and it is not ideologically new. “If you're tired of arguing with strangers on the Internet, try talking with one of them in real life,” says Obama. “If something needs fixing, then lace up your shoes and do some organizing.”

The newness qualifies as such because it offers a diversion from the arc toward isolation. It is a newness living in the unpaid or underfunded organizers who have been working in your communities for decades. It is there in the check-out line; planting a community garden; riding the bus. It is there in local media outlets  —  here in Seattle at the The Seattle Globalist, The South Seattle Emerald, The Evergrey, Crosscut, The Stranger  —  outlets that engage with and embed in community, not as an instrument to ground a national issue, not to fulfill a diversity quota, but for the intrinsic value of these stories.

The survival of these people and institutions — the real democratic institutions, the ones already doing the work — is predicated on other people investing in community. “That's what our democracy demands,” offers the President. “It needs you. Not just when there’s an election, not just when your own narrow interest is at stake, but over the full span of a lifetime.” The newness is here; it just requires a swiveling of eyeballs. It requires eye contact. I don’t know how to encourage that paradigmatic shift. Burning Facebook servers, maybe. Happy New Year everybody. My fellow Americans.

It is New Year’s sunset when I run into Kevin by the market. Like me, like our NPR Politics Podcast hosts, perhaps like everyone except our so-often caricatured President, Kevin is a caricature of himself: Purple Heart veteran, shot twice, black skin, skinny, two years sober, seven months homeless. Today we talk about failures. We watch someone try to parallel park for upwards of 10 minutes. (A failure there, too.) Kevin is a member of a class-action lawsuit targeting the VA for denial of disability benefits. On Veterans Day, he was invited to hold a section of the big American flag they rolled out at the Seahawks game. He got to keep the coin from the coin flip. It is lighter than I expect. He thinks it heavier.

Today I learn Kevin is also a Type 2 diabetic. I ask him if he has an OK test kit. Yes; he shows me. An Amazon employee got it for him. Good. (Cynicism is there like a baseball bat: I wonder if the employee in question is complacent. I wonder if they think about housing. I also wonder why I feel as if I am in a position to evaluate the moral standing of an Amazon employee who helped someone out.) We talk about the Seahawks for a little longer, but I am not a 12, and I am quickly in over my head. We part ways, him with dinner money, me with the same complacency I imagined in my nameless Amazonian foe. My headache is still kicking around.

Walking up one of Seattle’s many hills that night, I am struck by the relationship between the New Year and this complacency. Slate-clearing is necessarily erasure. Resolution implies a purity that ever existed. Post-election (white progressive) urgency — rooted in hope, rooted in silicon RESISTANCE — and the resolutions it fuels neglect the work that has been requesting urgency all along. No, the name of the newness this year will not be hope. The newness has something to do with listening, with apology, with history. Reparation, maybe. Not so much reaching forward as reaching back — not to the things that make America great (that flawed premise) but to the people who were already trying to make it better.