A new, safer way to monitor the warming oceans 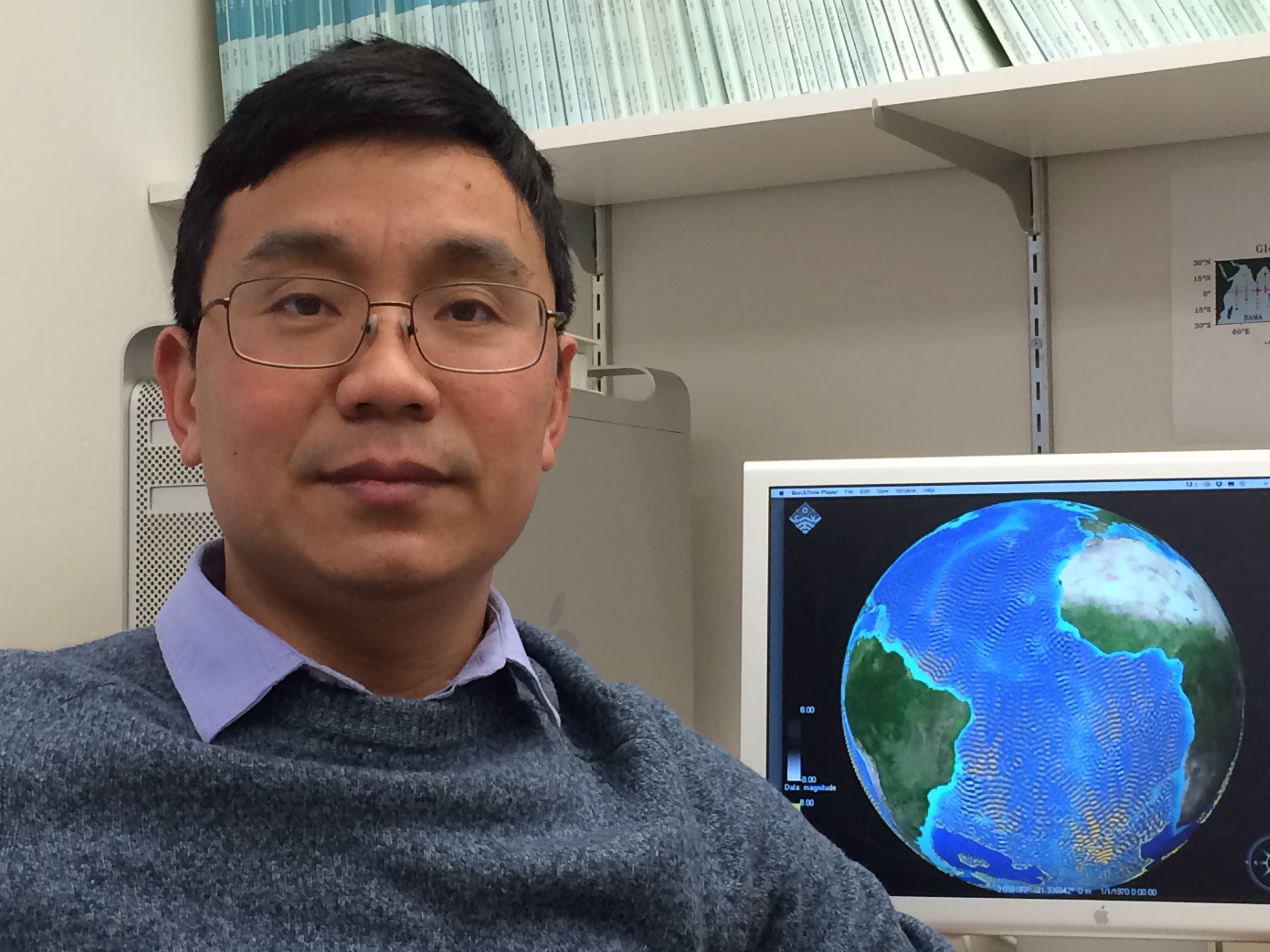 Zhongxiang Zhao, an applied physicist at the University of Washington

As the Earth warms with climate change, more than 90 percent of that heat is stored in the ocean, so it’s important for scientists to have a way to take the ocean’s internal temperature. The methods used to do so today are incomplete and expensive, however. Now, after about a decade of research, Zhongxiang Zhao, an applied physicist at the University of Washington, thinks he’s figured out a better way.

These days, ocean temperature is measured three ways, two of which — XBTs and CTDS — require dropping equipment into the water from ships, so they obviously only provide data where there is currently a boat that has the goods. The third method, Argo floats, is a network of more than 3,700 robot buoys across the global ocean. Out at sea, the Argo floats have a 10-day cycle where they autonomously travel down to 2000 meters or more, then back up to the surface to tell satellites what they learned about the depths below.

But with an annual operating cost of $24 million, the Argo float program, which launched in 2004, is also expensive. What’s more, there still aren’t enough of them to tell the whole story. This lapse of temperature data of the ocean’s interior led to the scientific question over whether the world hit a “global warming pause” in the early 2000s, which fueled debates in congress over whether climate change is real.

Scientists have since debunked the idea of a global warming pause. But the debacle still goes to show why we could use more methods to bolster our understanding of how hot the oceans are running.

These gaps in data collection led to Zhao’s investigations of other possible approaches. In a nutshell, Zhao’s technique, published in Geophysical Research Letters, extrapolates the temperature of the ocean’s innards by using satellites to measure the daily sloshings of the seas that are created by the moon.

Let me explain. Tides aren’t just a coastal phenomenon, and waves don’t just happen on the surface: the gravitational pull of the moon as it orbits the Earth creates waves that travel within the ocean’s interior, called “internal tides.” As physical oceanographer Walter Munk, the “Einstein of the oceans” described, “Gravity waves in the ocean’s interior are as common as waves at the sea surface — perhaps even more so, for no one has ever reported an interior calm.”

These internal waves create a matrix of ripples that travel beneath the surface. “I track all these waves to see how fast or how slow they move in the ocean to monitor ocean warming,” Zhao explained.

In broad brushstrokes, as the different layers of the ocean warm, their density changes, and these density changes in turn impact the speed of the internal waves. Zhao studied the internal waves by tracking them via the very slight bump the waves create on the sea surface (which he measured using NASA’s record of Earth-observing satellite data—once again proving the program’s utility), and looked at how their speeds changed over time.

For example, in 1995, internal waves took an average of 200 hours to travel a 2,400 kilometer stretch in the Atlantic Ocean, but by 2015 they had sped up to take an average of 198 hours, which Zhao says indicates warming. He then correlated these speeds with the available record of temperature data, creating equations that could possibly determine the temperature directly from the internal wave speed in the years to come.

Zhao modeled the concept after Walter Munk's work. In the late 1970s, Munk realized that you could monitor global ocean temperature by how fast sound travels within the sea, as sound travels faster through warmer, lighter water.

Between 1996 to 2006, this theory was put to use: Sounds were blasted in the deep ocean several times a day, and scientists would see how long it took these blasts to reach the other side of the basin. Understandably, scientists raised concerns about the impact these loud noises had on whales and other marine mammals — and so the program was cut.

Zhao ’s model, in contrast, relies on silent, natural waves measured by a system of satellites that’s already in place because it provides heaps of other information as well. “The point is this technique depends on satellites, so it’s super cheap for the long term,” Zhao said. “And for monitoring global warming, we need to do that for decades or maybe centuries.”

Now if we can just keep those satellites in orbit: President-elect Donald Trump’s space policy advisors have already proposed downsizing NASA's satellite budget, arguing that the agency's time is better spent on "deep-space activities rather than Earth-centric work."