5 things to watch in Olympia this year (besides education funding) 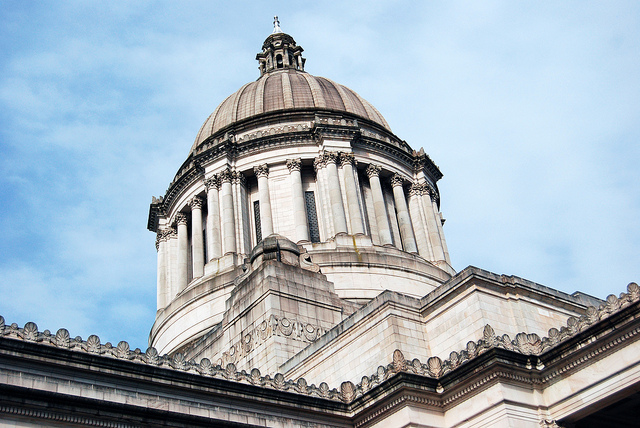 Last Thursday, just before 10:30 in the morning, Washington State Sen. Christine Rolfes, D-Bainbridge Island, uttered what may become the watchword of the coming legislative session: “Doom.”

Rolfes was talking, of course, about the prospects for solving the state’s education funding crisis. Her remarks illustrated the climate of negativity already evolving in the state capital — and the fact that in a year sure to be dominated by that crisis, other issues may struggle for airtime.

Rolfes’ remarks, made during a panel of legislative leaders discussing the state’s education funding crisis, came as part of a larger broadside she unleashed against Republicans in the legislature for what she characterized as inaction. After both parties agreed to study the crisis during the latter half of 2016, Democratic legislators unveiled plans earlier this week to end the shortfall. But Republicans did not, instead providing only a set of “guiding principles.”

This slow start, said Rolfes, could doom the legislature to an overtime "special session," and an incomplete solution. The ability to move forward, she said, depends on how long it takes Republicans to present a complete plan.

Republican leaders responded that a smaller group of Republican legislators had been working on the issue extensively, and that they thought the work of hammering out specifics would go quickly once the session started.

While the education fight may suck up most of the air during the session — not to mention most of both parties' political good will — there are a few other items worth keeping an eye on. Here are five of them:

The price tag on fixing the state’s education system is huge. Lawmakers disagree on the exact number, but almost none expect it to be less than a billion. To fill the hole, Gov. Jay Inslee made three tax proposals in his pre-session December budget proposal: a carbon tax, a capital gains tax and a rewrite of the state’s Business and Occupation tax code. Republicans likely won’t lay down for all three, but it does seem likely they will come around to the need to find new money somewhere.

What form that will ultimately take is hard to say, but Republican leaders from both the House and Senate Thursday expressed openness to the idea of a B&O rewrite, with the caveat that they don't like the specifics Inslee has proposed. Legislators on both sides have long criticized the B&O tax, as it's widely agreed to hit small businesses hardest.

Given the prominence of the B&O tax re-write in Inslee’s plan — it pays for $2.4 billion of his $3.9 billion education package — it seems likely that Democrats will be willing to work with Republicans to revise the governor's initial proposal, while perhaps sacrificing one or both of Inslee’s other two taxes.

One question is which of Inslee’s taxes Dems give up first. The carbon tax would put the state on the cutting edge of climate change policy, while Inslee’s capital gains proposal would be a historic shift in the state’s tax policy, bringing it more into line with national norms. But the likelihood that Republicans will accept both seems low.

This year may well see meaningful developments in a long standoff with the federal government over ID requirements. The 2005 federal REAL ID act required all states to confirm legal residency before issuing state identification like drivers' licenses — but Washington didn't comply. In response, the Department of Homeland Security set a deadline for the state. The feds extended the deadline, most recently to 2018, but in October announced they wouldn't extend it any further, raising the possibility that Washingtonians might not be able to use their drivers' licenses at airport security.

With that threat looming, a pair of bills pre-filed in the state house and senate would move the state toward compliance while creating a pathway for non-citizens — including undocumented immigrants — to get identification.

Asked about it Thursday, Inslee said he was generally in support of both.

The fact that the Governor made a complete revamp of the state’s mental health system a central part of his yearly budget proposal means it will be part of negotiations this year, likely second only to the education funding gap. Inslee’s plan would create new community facilities to speed the process of moving people into and out of care. It would also increase staffing at existing facilities and create community crisis response teams.

Some of Inslee’s proposal will likely be carved away by Republican budget knives in the Senate, where efficiency at existing facilities is typically embraced over opening new ones. But some elements of it may make it into the final budget.

Revisions to the state’s deadly force laws, which are among the most conservative in the country, may face a tough road this year. Legislators convened a joint task force in the 2016 session to study whether to remove requirements that prosecutors prove that officers acted with malice and bad faith when they used deadly force. Both are near-impossible to prove in court. The task force voted to recommend removing both. But Republican leaders last week expressed skepticism at the idea, which is a tough sell for law-and-order conservatives.

After the state’s own raft of issues, from the education funding shortfall to the burgeoning opioid crisis, anxiety over President-elect Trump’s plans might be the next biggest worry in Olympia. With Washington’s deeply trade and immigrant dependent economy, the new president amounts to a big unknown not only for the fate of the nation, but the state as well.

Nowhere is this more true than with Obamacare. Legislators have estimated that a repeal of the law could cost 750,000 Washingtonians their health care coverage and the state budget hundreds of millions. For his part, Inslee said last week that he is “totally focused” on stopping a repeal.

The feds could hit the state in the pocketbook in at least one other area, too: marijuana. Sen. Jeff Sessions, Trump’s pick for attorney general, is a well-known foe of pot legalization. The drug is still quite illegal under federal law, in part because the Obama administration elected to ignore legalization moves in states including Washington, rather than push to change federal laws. Sales of the drug brought Washington about around $70 million in taxes in their first year, and have increased since. But all that could go away if Session decides to clamp down.

This story has been updated since it first appeared to clarify and expand Rolfes' remarks about addressing the education funding issue.