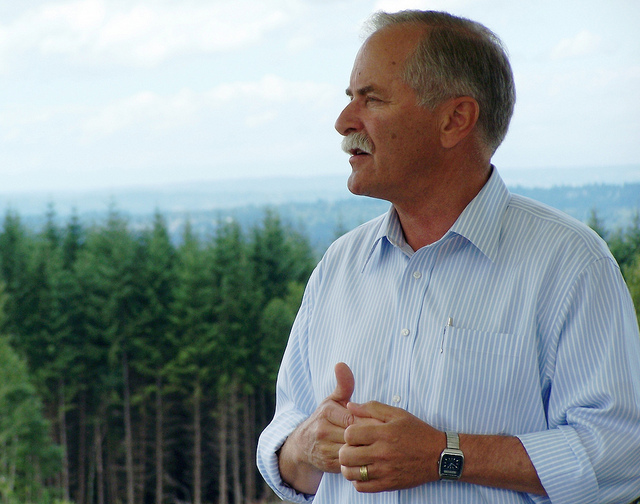 This story was produced by OPB/EarthFix.

Washington State Commissioner of Public Lands Peter Goldmark announced Tuesday he will deny a sublease request for the coal export project proposed in Longview and expand an aquatic reserve at Cherry Point in Puget Sound where another coal terminal was proposed.

Goldmark, who is leaving his post this month when his term expires, says he doesn’t have a position on coal exports.

“The message of today is I’m taking steps to protect state-owned aquatic lands,” he said. “That’s part of my responsibility as commissioner of public lands. Coal export is a different issue that’s not really the main driver here today.”

But the commissioner said Millennium chose not to answer the state’s questions about its financial condition and the company’s new ownership. One of the primary shareholders in Millennium Bulk Terminals, Arch Coal, declared bankruptcy last year.

Goldmark declined to say what effect he expects the sublease denial to have on the project.

Brett VandenHeuvel, executive director of Columbia Riverkeeper and an opponent of the Millennium project, said the company can’t build on the proposed site without state approval on a sublease.

“We think this is a huge problem for Millennium,” he said. “They can’t build the terminal without the sublease, so were thrilled by this decision.”

In a statement, Millennium CEO Bill Chapman said Goldmark’s decision will have “no effect on the project moving forward” because the state has recognized Millennium as the operator of the port facility on the site and existing state land lease held by Northwest Alloys allows for coal shipments.

“The public knows from the actions of past Lands Commissioners that they have a proclivity for making symbolic gestures as they exit office,” he said. “We look forward to permitting and operating a world-class port in Longview that will provide family wage jobs and tax revenues right where they are needed in Cowlitz County.”

Goldmark said he decided to expand the aquatic reserve at Cherry Point near Bellingham after studying the area at the request of the Lummi Indian Business Council. The area is home to herring and eelgrass habitat that are important to salmon.

The 45-acre expansion covers the area that was proposed for the Cherry Point coal export terminal. The Lummi Nation argued the development would interfere with tribal treaty rights, and last year the U.S. Army Corps of Engineers denied a key permit and effectively killed the project to keep the tribe’s fishing rights intact.

Goldmark said expanding the aquatic reserve in that area “is the final action we the state of Washington can take to restore that reserve to its fullest extent to protect both Cherry Point herring and other species and recognize treaty rights of nearby tribes.”

“We thank Public Lands Commissioner Peter Goldmark and the DNR for the decision to permanently protect the area that the Lummi people call Xwe’chi’eXen,” said Timothy Ballew II, chairman of the Lummi Indian Business Council. “This is an historic day for the Lummi, our treaty rights and our future generations.

“Across the country, from Xwe’chi’eXen to Standing Rock, Native people are celebrating the protection of our ancestral lands,” Ballew said.