Next up for this award-winning choreographer: Police brutality 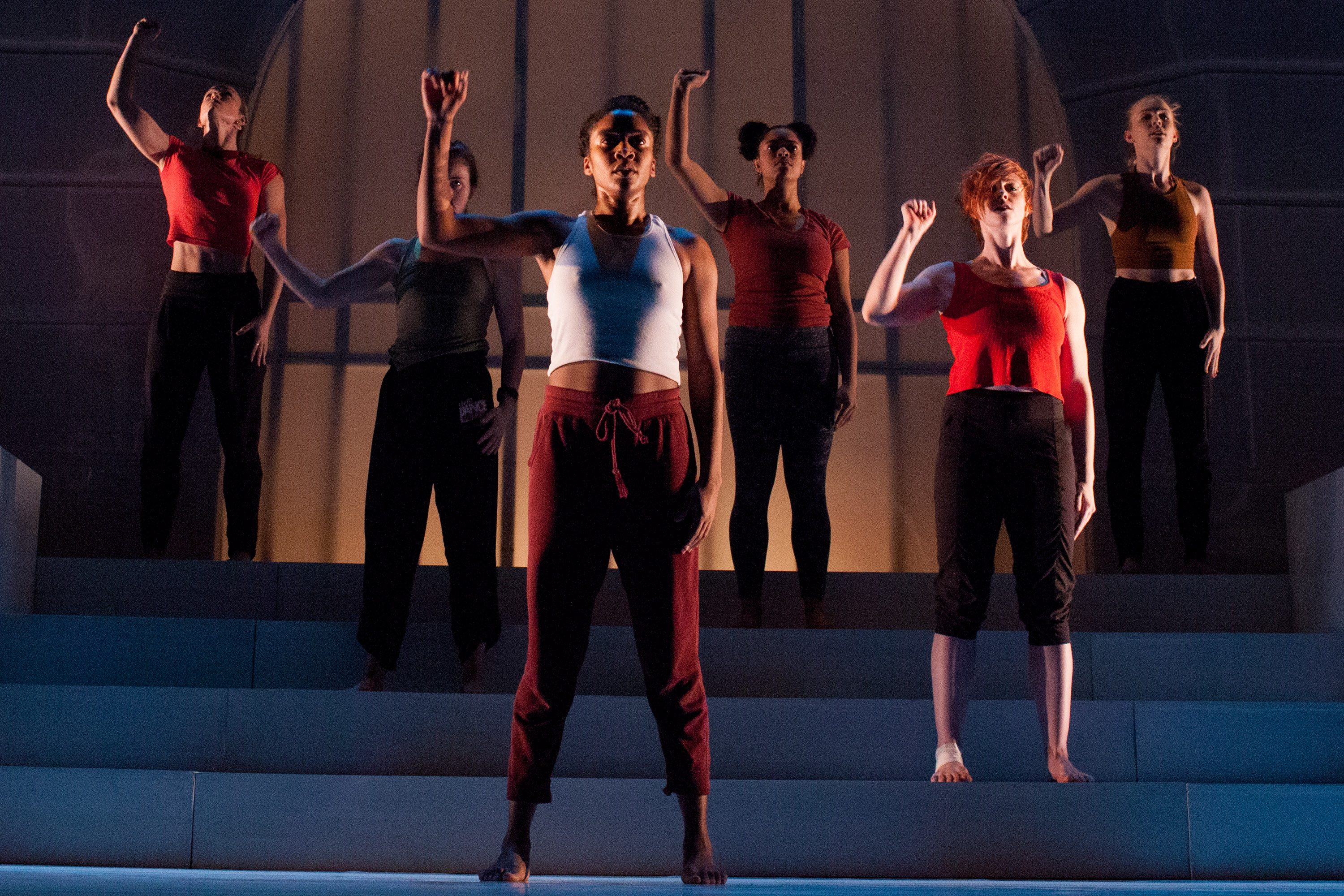 Nia-Amina Minor and Spectrum Dance Theater company dancers raise their fists in the air during a tech rehearsal for ‘SHOT,’ a production by Donald Byrd, on Wednesday at Seattle Repertory Theater

At a moment in time when so many fear a possible rolling back of progress on social issues, Donald Byrd, nationally respected choreographer and artistic director of Seattle's Spectrum Dance Theater, has taken up the idea of resistance.

Last year, Spectrum launched a groundbreaking series exploring issues of race. Now, in its new season, Byrd is plunging into police brutality, an increasingly visible part of the long, ever-evolving history of racism in the U.S.

“SHOT,” a world premier that kicks off Spectrum’s season tonight, centers on the killing of black people by American law enforcement.

Byrd uses a type of performance he calls “theater of disruption,” which combines dance, text, fiction, music and voice. The performance is set on a streetscape. Crisp lines on a white backdrop allude to a municipal building. Dancers recite shooting victims’ names as a way of memorializing them, just as they did in the company’s June show, “The Minstrel Show Revisited."

A central figure in “SHOT” is a woman, performed by Nia-Amina Minor, responding to the shooting of her beloved. The character is based on Rakia Scott, whose husband, Keith, was shot and killed in Charlotte, North Carolina, last September, setting off three days of protests. Minor cries out, “Don’t do it. Don’t you do it. He doesn’t have a gun.”

The audience gets a picture not only of a life-altering moment, but also a window into its aftermath. Through dance theater, we get to understand that victims like Keith Scott and Tamir Rice, the Cleveland 12-year-old who was shot while holding a plastic toy gun, "are fathers and sons, husbands, not just statistics,” Byrd says.

Spectrum and Byrd have taken their work on social issues beyond theatrical dance, co-hosting (with Crosscut) a well-attended panel Tuesday on race and police brutality.

The discussion centered around whether police reform efforts can make a deep enough impact prevent killings of people of color. Panelist Riall Johnson, a leader of the Alliance for Gun Responsibility and a former NFL player who grew up in Snohomish County, said, “It only takes one bad apple to ruin my day or end my life.”

Lisa Daugaard, director of the Public Defender Association in Seattle, discussed efforts currently underway to change the state law that has made it impossible for prosecutors to convict police officers in even the most egregious shootings of members of the public.

Following SHOT, in March, Spectrum will present the third year of its Rambunctious series, which pairs dance with live music. Last year’s series explored African-American composers. This time, it will feature classical composers who immigrated to this country from Russia, Cuba, Iran, Mexico and China.

The season will close with “(IM)PULSE,” another theater of disruption work, where Byrd will explore the topic of aggression toward the LGBTQ community and gay bashing.

“(IM)PULSE” has two parts and a separate text for each by two different writers, playwright Brian Quirk and the late David Wojnarowicz, an artist, author and AIDS activist.

Byrd says there is a commonality between Quirk and Wojnarowicz’s writings: “When something traumatic happens to them [the characters], they imagine something else.” In Wojnarowicz’s book, “Close to the Knives: A Memoir of Disintegration,” the main character fights back.

And fighting back is central to what Byrd is doing: Racism “keeps reiterating itself,” Byrd said in a 2015 interview. “I think we have to start taking steps that will act to stop it. … We have to take the gloves off when battling racism in America.”

Find more information about the season, and buy tickets, on Spectrum’s website.