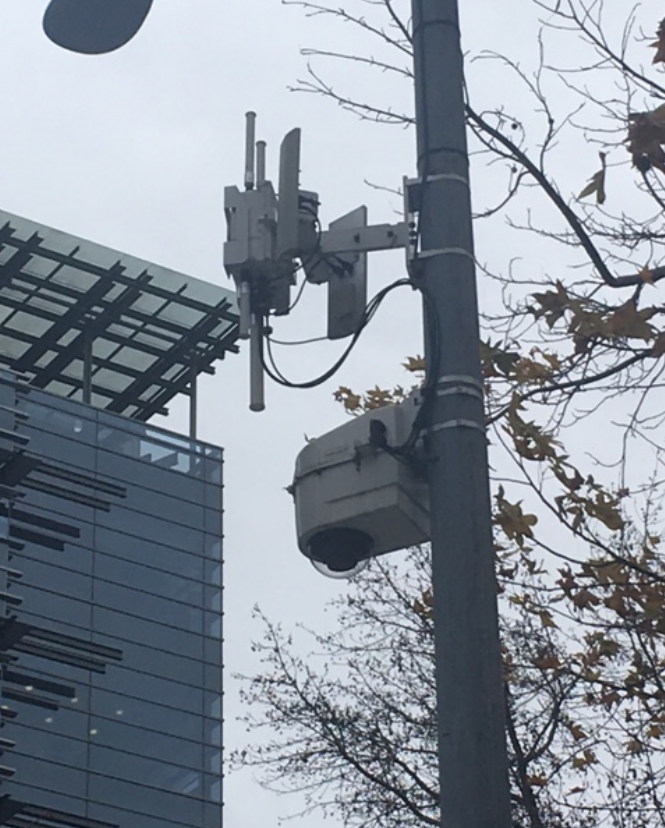 A surveillance camera outside City Hall

Seattle City Councilmember Kshama Sawant promised Tuesday to propose legislation that would require all federal agencies to obtain council approval before installing surveillance equipment. The ordinance, she said in an interview, would ideally function retroactively, meaning any equipment currently installed would need to get approval from the council or come down.

Her effort is spurred in large part because of several disclosures of cameras belonging to the Department of Alcohol, Tobacco, Firearms and Explosives (ATF) and the FBI that have been quietly installed throughout the city. Last week, a federal judge barred the city from releasing information about the cameras to the public.

ATF Public Information Officer Jason Chudy declined to comment on pending legislation. Among the obvious questions are whether the feds would assert the ability to override any local ordinances or permit requirements.

The City Attorney's Office didn't immediately respond to a request for comment on city authority. Shankar Narayan, attorney with ACLU of Washington, conceded at a City Council committee meeting Tuesday, "There are probably limits to what the city can do to bind federal agencies."

The question for advocates moving forward is how to, as Narayan said, "incentivize" the feds to be more transparent and whether city departments like Seattle City Light can refuse use of its facilities. For now, City Light representatives say they no longer track when and where cameras are installed and therefore don't know how many are in operation.

In the interview, Sawant said she would use discussions within the council to shape the specifics of her proposal.

Concerns over privacy of citizens took on a fever pitch after National Security Agency contractor Edward Snowden revealed massive government surveillance of private citizens. In Seattle, following the quiet installation by the Seattle Police Department of cell phone surveillance technology, the Seattle City Council passed a 2013 ordinance requiring such efforts receive council approval. Sawant calls that ordinance a “great first step,” but cited a clause that allows for federal departments to install equipment for use in specific investigations.

“It’s being used as a loophole,” said Sawant, praising city departments' compliance efforts, but complaining that federal agencies have interpreted it as a “blank check.”

The city also passed a set of “privacy principles.” While some privacy advocates praised them as a step forward, they’ve been met with an equal amount of criticism, accused of being toothless.

In the summer of 2015, two high-profile disclosures hit local media around the same time. In June, KIRO revealed surveillance operations run by the FBI, including through the use of Cessna airplanes circling Seattle.

Then, in August, Crosscut and other outlets reported on ATF cameras affixed to Seattle City Light poles, first noticed by a member of the Seattle Privacy Coalition, Lee Colleton, while marching through the Central District.

A representative from ATF told Crosscut at the time that the cameras were installed to assist in a single investigation — part of an inter-departmental Puget Sound Regional Crime Gun Task Force. But more than a year and a half later, the cameras remain.

Sawant has not drafted the legislation yet. On Tuesday, she hosted a discussion in City Hall with representatives of the Seattle Privacy Coalition and the ACLU of Washington. She said Tuesday that representatives from the Seattle Police Department were invited, but declined. SPD did not immediately return Crosscut’s request for comment on the process.

“We are having this discussion today because we strongly believe that the city government should not be in complicity with the federal government in surveilling private citizens,” Sawant said. “As a sanctuary city we have a greater obligation to protect private citizens.”

While surveillance and privacy has been of particular concern for a smallish contingent of advocates in Seattle for years, the question seems to be taking on a post-election urgency in the city, where voted only 8 percent for President Donald Trump. Immediately following his election, Crosscut reported that police reform advocates were heightening calls to clarify how SPD body camera footage, soon to be produced in large quantities as more officer don cameras, is or is not shared with federal agencies. “Assuming there will be no sharing or no problematic sharing seemed unwarranted under Obama, but reckless under Trump,” co-chair of the Community Police Commission Lisa Daugaard said at the time.

Sawant said that these protocols should have been clarified a long time ago, but said there was a similar heightened urgency under Trump.

The city's current surveillance ordinance requires city departments to seek approval from the council before installing or seeking surveillance technologies. Narayan said, in fact, Seattle City Light violated this ordinance when it requested help from ATF to monitor restaurant workers dumping grease down a manhole.

But less clear is whether Seattle City Light has the obligation or authority to intervene when its facilities are used for federal surveillance purposes. Jim Baggs with City Light said the department's current approach is to not intervene at all, to help or hinder.

It’s not immediately clear that there is necessarily widespread opposition to some forms of surveillance. According to a recent survey done by the team monitoring Seattle’s police reform efforts, 92 percent of citizens support body cameras for police officers. In July of 2015, several representatives from Seattle’s black community called for more surveillance as a means to secure more prosecutions for shootings. And last June, the city rolled out new plans for installing shot location technology.

“On a reasonable basis, there may be legitimate investigation requirements,” Sawant said. Later, though, she added, “I do understand that there are some conflicting opinions on these issues. I would say this: In order to ensure that there is no more racially biased policing … what we need is not surveillance equipment. What we need is a functioning democratic process.”