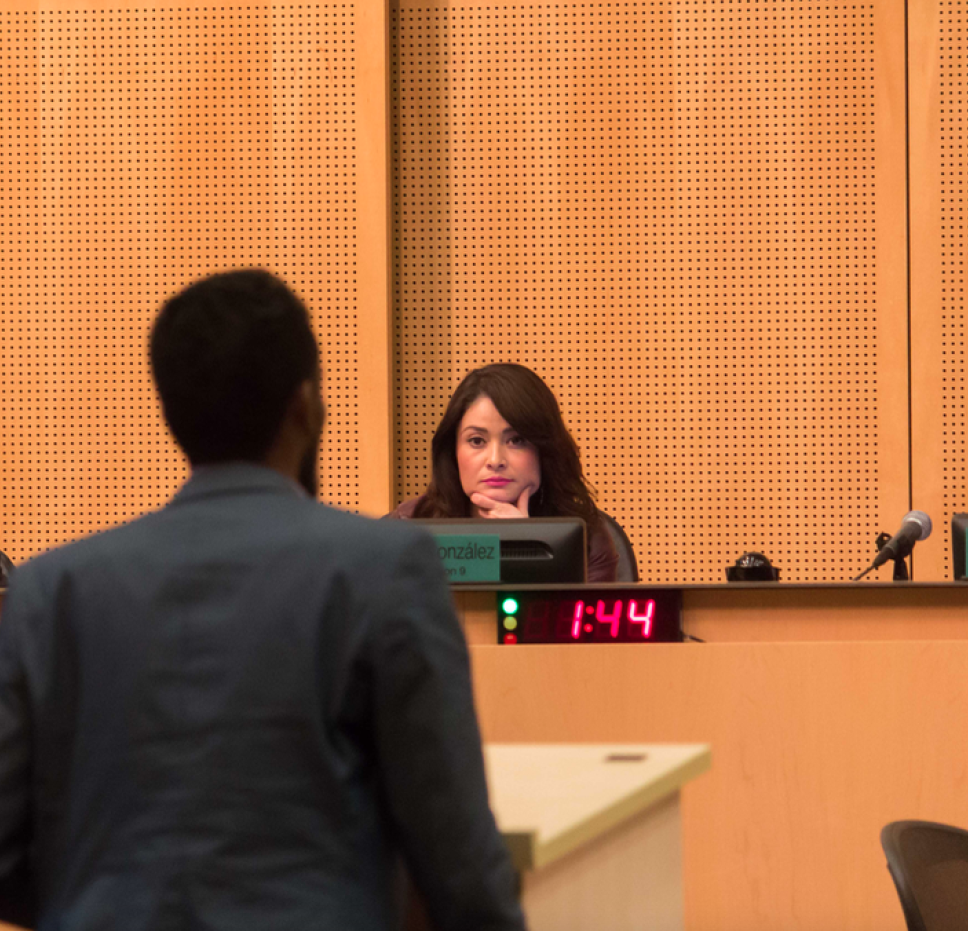 Angered by a seven-minute gap between when Che Taylor was shot by police and when he received CPR, Councilmember Kshama Sawant is calling for Seattle City Council to lead a public discussion between the community and the Seattle Police Department.

In doing so, she excoriated the council for not having played a bigger role earlier in examining the circumstances around Taylor’s shooting and eventual death.

Her colleague, Councilmember Lorena Gonzalez, who represented victims of police violence as an attorney, worried that further public airing of evidence would interfere with an ongoing King County inquest. But Gonzalez expressed her shared concerns about the video, released by Crosscut last Thursday, calling it “disturbing” and “unconscionable.”

Che Taylor was shot and killed last February. Police say he was seen with a gun he couldn't possess as a previously convicted felon, so they moved in on him. But the encounter quickly went south, and police shot him after he allegedly reached for a gun in his car.

Although the Seattle Police Department quickly released photos of the gun, their claim of a gun was quickly dismissed by members of his family, his lawyer and representatives from the NAACP as framing.

Although the claims of a frame-up encountered resistance — Councilmember Gonzalez at the time said she couldn’t believe that to be true — a wealth of questions arose after the police department released a minute-long clip of the shooting. Among the issues were whether the police properly de-escalated the situation as they’ve been trained to do under a federal consent decree and whether police knowledge of Taylor’s criminal past might have unnecessarily led to his death.

Protests and an organization called Not This Time, started by Taylor’s brother, Andre, sprouted in the aftermath of his death.

But the department never released the full footage of the shooting, obtained by Crosscut through a public records request. Although the officers at the scene call the paramedics immediately after Mr. Taylor is shot, it takes seven minutes for him to receive CPR from an officer.

On Monday, during the council’s weekly briefings, Councilmember Sawant wondered why the full video was not released earlier. She added: “In light of the newest disturbing video, council should hold some discussion between the public and the Seattle Police Department. When we do hold this meeting we should have representatives from the NAACP and Not This Time.”

She said she’d instructed the research arm of the city council to answer whether “there are written protocols in the Seattle Police Department if a suspect has been shot and injured, and the officers have backup on the scene, do the protocols obligate officers to find aid?”

On the public discussion, Councilmember Gonzalez pushed back on Sawant’s statement that the council had been quiet, pointing to a meeting last April, which included time for Not This Time representatives to speak. She said, “It may not have been structured in the way Councilmember Sawant wanted, which may explain why she didn’t attend the meeting.”

Gonzalez expressed concern that hosting a public hearing in the near future would violate the rules surrounding an upcoming King County inquest into Taylor’s death, a proceeding called to address the circumstances surrounding the shooting. “I have kept apprised of how that is progressing," she said, "and have been told repeatedly that while that inquest is going, it would be unreasonable and imprudent to have a public conversation about the actual evidence related to that particular piece of litigation.”

But on the nature of the video, Gonzalez spoke forcefully. “With respect to the video that was just released in the media last week,” she said, “I also found that video incredibly disturbing as a former civil rights attorney that represented victims of police violence. It’s my understanding there were at least 7 minutes that passed by before any aid was provided to Mr. Taylor once he was shot."

The Seattle Police manual states that officers must provide aid when "reasonable," a hazy watermark that largely means when the scene is safe. Sgt. Sean Whitcomb with the department told Crosscut last week that, while officers are trained in first aid, the primary concern is safety for the officer.

But Councilmember Gonzalez appeared confident Monday that, in this instance, the officers should have provided aid.

"The standard [of when to provide aid] that Councilmember Sawant is inquiring central staff to look into is pretty clear, in my perspective, that officers are required to provide aid as soon as the scene is secure. … I find it disturbing that it seems that might not have been done and we’ll follow up with the Seattle Police Department to inquire as to why that wasn’t.”

She finished her comments Monday morning, saying, “In this case it is absolutely unconscionable to fail to provide aid.”

The video’s release is part of a one-step forward, one-step back form of police reform in the eyes of the council and the public. Just last Friday, however, as part of the consent decree between Seattle and the Department of Justice to reform SPD, U.S. District Court Judge James Robart allowed a slate of aggressive accountability measures to move forward for debate in City Hall.

While the council has been intensely watching and discussing the state of reform, the decision means members will shortly have the opportunity to legislate systemic changes — an opportunity they’ve been waiting on for literally years.