A win for local media: The Seattle Globalist lives on 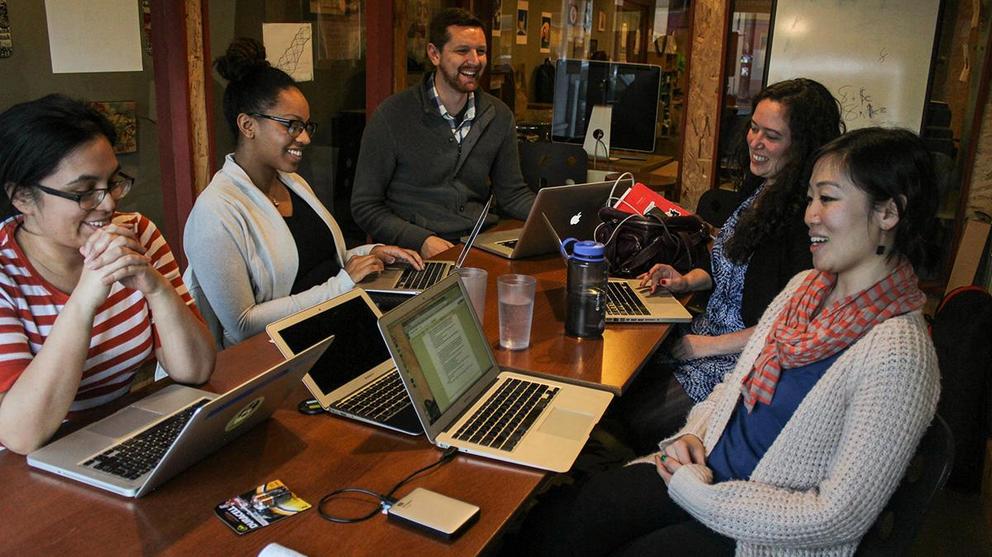 At a time when the news about the news is often discouraging, with buy-outs and layoffs continuing at local media outlets, there have been a few bright spots in the past few years: Crosscut’s merger with KCTS9 public television, for one, and the rescue of KPLU public radio, since renamed KNKX. Now comes the word that the Seattle Globalist, a nonprofit community news organization, has cheated death to live another day.

The Globalist was born in 2012, the brainchild of Jessica Partnow (now the executive director), Alex Stonehill (founding editor), and Sarah Stuteville (education director). The three saw that diverse and international populations were growing in Seattle, as were issues regarding immigration, but traditional news outlets were not doing a good job of covering any of it.

Today, the website focuses on the connections between international and local affairs in Seattle, reporting on diverse communities whose voices are often unheard of or misrepresented in traditional media. The staff also trains young and minority media makers through classes at the University of Washington’s Department of Communication and workshops throughout the community. (Full disclosure: I am one of their students and have written for the Globalist myself.)

Much of this has been made possible via funding from the university. But last August 24, David Domke, Communication Department chair, broke the news to the staff that their funding would be cut, starting in June. They were being kicked out of the nest.

“We had always known these were incubation funds, but I was surprised by the timeline,” Stuteville said. “We had imagined we had two more years to build a bridge towards more independent funding.”

Would the Globalist make it? Or would it blink out, like so many other local media organizations in recent years?

“My first thought was, I don't think the Globalist is going to survive this,” Stuteville said. “But, then I realized, no, we've got a ton of community support, we'll find a way to keep doing this work.”

The staff started exploring partnerships with other local organizations, and launched a fundraising campaign, seeking commitments for $5,000 in ongoing monthly donations. They spread the word about the campaign using social media, their website, and other local media outlets.

On Tuesday, Stuteville reported in an email to Crosscut that they had met their fundraising goal, pulling in commitments for a little over $4,700 in monthly donations, plus more than $10,000 in one-time gifts.

“This is great news, as it means that the Globalist will have a small but secure foundation as we work to build additional funding bridges away from the University of Washington,” Stuteville wrote. “And it was entirely a result of the Globalist community stepping up and supporting our mission with their dollars.”

Still, she said, there’s is much work left to do. The gifts offer a “lifeline” and enough to pay one to one-and-a-half employees, but they will need additional support to fund their youth and community education programs.

There are plenty of people who will be rooting for them.

Young writers like UW junior Agatha Pacheco, who was in Partnow and Stuteville’s advanced multiplatform journalism class, say working with the Globalist has given them real confidence as they contemplate a career in a field that has only become more competitive as jobs have grown more scarce.

“Every writer has a sense that they may not be good enough because we’re so critical of our own writing,” Pacheco said. “But the Seattle Globalist gives you this space to be published and respects you as a professional.”

According to the Globalist website, 67 percent of the writers are of color, 73 percent are female, and 45 percent are immigrants or first generation Americans. It's quite a contrast in a field that is overwhelmingly white.

“If we think that journalism needs to be produced by people who are really separate from the communities that they are covering, we’re not gonna really know what’s going on in those communities and we’re not going to get quality news that’s covering every viewpoint,” Partnow said.

Not only has the Globalist brought new voices to light, but it has also made waves in the community.

After a 2014 story about the Gates Foundation's investments in the private prison corporation that runs  the Northwest Detention Center, Gates divested from a connected company, G4S, according to Globalist editors. Rep. Adam Smith has picked up the issue and has proposed a number of bills for detention center reform. His staff have cited Globalist reporting as one of his key sources of information on the issue.

After the Globalist ran a story reporting on the struggles of a popular foster grandparent program, a reader sent the program a $7,500 donation. That kind of thing happens a lot, said Stonehill.

It’s worth noting that the jobs saved in the recent mergers and reader-powered rescue missions pale in comparison to those lost in local newsrooms in recent years. Still, the fact that the Globalist is still standing offers a glimmer of hope for the media, and the public that depends on it.

“We have some serious work ahead as we rebuild ourselves outside of the UW next year,” Stuteville said. “But after the incredible outpouring of support from our community, I not only know that we can weather this storm, I'm convinced we'll be stronger for it.