On police reform, city must reckon with unions 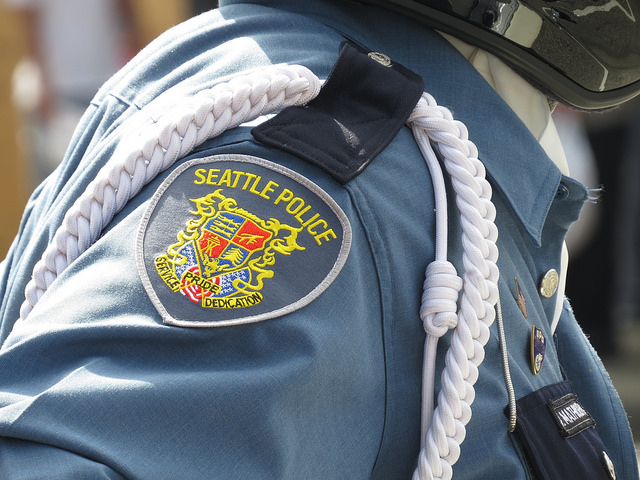 There’s no way around it: When it comes to reform, the City of Seattle must deal with the police unions. That was Judge James Robart’s conclusion in a Wednesday status conference on the settlement agreement between the U.S. Department of Justice and the City of Seattle to overhaul the Seattle Police Department.

Seattle City Attorney Pete Holmes requested the conference, hoping that Robart would agree with him that the unions were blocking citizens’ constitutional right to proper policing, and that the judge would therefore intervene, freeing the city to implement accountability measures without going through the collective bargaining process. But at the conference on Wednesday, Holmes was conspicuously alone in his assessment of the situation.

Representatives of the Department of Justice, the Community Police Commission (CPC) and the Seattle Police Officers Guild (SPOG) argued that the court had no justification for sidestepping the city’s duty to bargain. In fact, in Crosscut’s broader reporting on the subject, few inside or outside of the courtroom fully supported the city’s request.

While Robart reiterated a dramatic statement he’s made before — that the city will “not be held hostage” by collective bargaining — he ultimately concluded that there had been no constitutional violation yet.

The city’s consent decree with the Department of Justice is now more than 4 years old. Seattle has seen a string of good news lately, as reports from the monitor overseeing the process has issued positive assessments of the progress made. The most recent report was released Tuesday, praising the department’s supervisory structures and saying there was a much clearer line of authority than before the consent decree.

But while the monitor has given the department high marks for its internal structures and provisions governing officers’ use of force, the battle continues over an overhaul of the department’s accountability structure — namely the details around how complaints against officers are investigated, and how officers are disciplined.

As Robart said Tuesday, the accountability recommendations are “only a small part of the consent decree, but it obviously touches a nerve … and is part of a national movement caused by regrettable circumstances.”

Following years of wrangling, the city and the CPC successfully negotiated a package of reforms that were submitted to Robart last September. Once Robart has signed off on the proposal, the plan is to send it to the city council, which will codify the reforms into law. But before it's complete, the police unions will have a chance to weigh in: At the end of that package was a clause that, where necessary, the city would fulfill its collective bargaining agreement.

Robart is not fond of that proviso, however. After a letter from SPOG "reminding" the judge of the union’s rights to bargain, and an unfair labor practice complaint from Seattle Police Management Association (SPMA), which wants to see the package bargained before going to the council, Robart threatened to sidestep collective bargaining by proving that the unions were guilty of unconstitutional policing. (In the settlement agreement, there was never any admission of guilt by the unions or any other party.)

The threat set off a lot of head-scratching, but the city doubled down by asking the judge to intervene, pointing specifically to SPMA’s complaint that the city had not bargained in good faith, and to SPOG’s rejection of a contract last summer, as proof that the unions were obstructing the consent decree. On Wednesday, Holmes in court accused SPMA of trying to “undo all of the city’s permanent accountability work.”

Still, Holmes didn’t see it this way. “Unions simply do not file an unfair labor practice complaints to protect a process. They do it to … receive something in exchange for the substance of the matter that’s under deliberation.” This “quid pro quo,” said Holmes, was the sort of hostage-taking Robart had referenced before.

Lisa Daugaard, with the CPC, says the city’s argument was a long-shot. “It’s always been understood that in the bargaining process the city might or might not secure some of these recommendations,” she said. Although Robart seemed personally inclined to shirk the unions, he said Wednesday he did not have the authority because the unions are not actually part of the lawsuit.

Robart concluded that none of what had occurred so far constituted his intervening, although he did tell the unions that they cannot "stick [their] head in the sand."

When will the consent decree finally be finished? Robart seemed to think 2018 was a possibility, with some mop-up work continuing until 2020. But add that to the slow legislative and collective bargaining processes, and you see timelines are never a sure thing in police reform.