7 minutes down: Police shot a man, then let him bleed 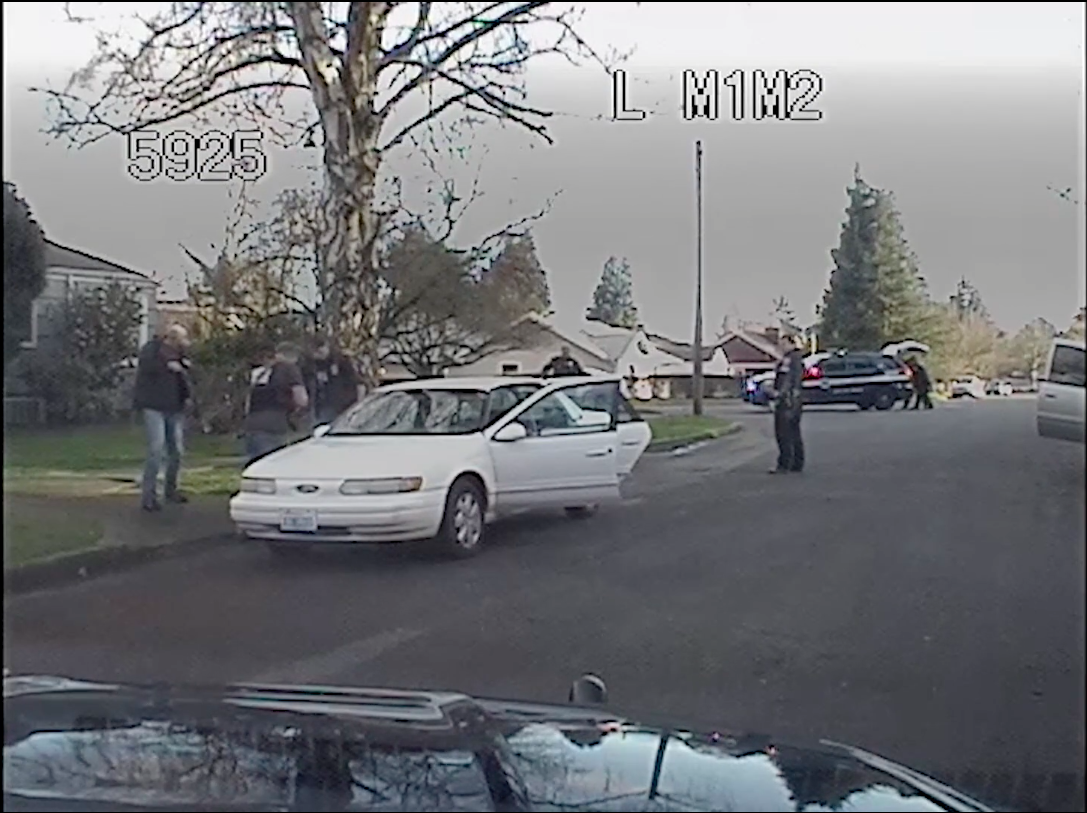 Che Taylor lay bleeding on the pavement for seven minutes without medical attention after Seattle police officers shot him last Feb. 21. For at least three of those minutes, Taylor was in handcuffs and officers clearly had the area secured.

The scene plays out in dashboard camera footage first obtained by Crosscut this week through a public records request. This story contains two versions of that footage: a truncated, 11-minute cut and the full unabridged video, first obtained on Thursday.

In the video, below, officers Scott Miller and Michael Spaulding charge a white Ford Taurus. Both officers are holding “long guns” — a shotgun and a rifle, as opposed to the more standard handgun — and yell at Taylor to put his hands up and to get on the ground.

Taylor, who is in the process of getting out of the car, seems to lean down. Spaulding and Miller open fire, shooting seven times and hitting Taylor in the chest, left back, left buttocks, left shoulder and left upper arm.

That much of the footage has been replayed countless times in the media, on Facebook and at community meetings: The Seattle Police Department released a minute-long dashboard video of the shooting to the public almost immediately after the shooting.

Medical examiners at Harborview Medical Center pronounced Taylor dead at the hospital several hours later, although it is unclear whether he died at the scene, in the ambulance or at the hospital. The shooting sparked citywide protests and the formation of Not This Time, a campaign started by Taylor’s brother Andre to change the Washington State law that makes it difficult to prosecute officers who use deadly force.

But the full-length video was only recently turned over to parties involved in a King County inquest hearing scheduled to begin at the end of this month. Crosscut obtained it through the Washington Public Records Act.

Immediately after Taylor is shot, in a leafy neighborhood in North Seattle, he disappears behind the passenger door of the Taurus. Spaulding and Miller hover over him as three other officers remove the two passengers from inside the car. It takes the officers about a minute and a half to get the passengers in handcuffs and out of the way.

In the seconds following, a calm descends. Spaulding and Miller keep their guns pointed at Taylor, who is making no noise that is discernable on the video. Another officer peers over, while a fourth officer says “fire’s on their way,” apparently referring to the Seattle Fire Department.

Just over two minutes after the shooting, someone says, “We’re under control for the time being. There are no injured officers.”

More than three minutes after the shooting, someone asks, “Is he secured?” The answer is “No.”

“Let’s secure him,” someone suggests, and an officer in a backward cap leans down and appears to put handcuffs on Taylor.

At a little over four minutes after the shooting, the officers seem satisfied that Taylor is secured: While Spaulding and Miller remain tense, their fingers near their triggers, they appear comfortable enough to turn their backs briefly on the scene.

At about six and a half minutes, an officer dons gloves and at seven minutes appears to lean down and begin administering CPR. At almost exactly seven and a half minutes , fire department paramedics begin attending to him, donning blue smocks, apparently examining him and then loading him onto a gurney. He is taken to an ambulance out of the camera's frame about 11 minutes after he's shot.

Taylor’s case has not received as much widespread national scrutiny as the police killings of other African-American men, including Eric Garner in New York and Walter Scott in South Carolina. That's in part because the footage is obstructed by the white Ford Taurus, and because the Seattle Police Department quickly posted photos of a gun that officers say they found in the car. The fact that Taylor had an extensive criminal record may have also made some shy away from his case.

An investigation by the Seattle Police Department’s internal Force Investigations Team determined the shooting was consistent with department policy.

But while Taylor had his history, many have criticized the officers’ approach. If the police had reason to believe that Taylor was dangerous, why did they surprise him as he was half inside of his car, and when he was not posing any immediate threat? Why did the officers order him to both put his hands up and to get on the ground?

King County Executive Dow Constantine ordered the inquest, as is standard in officer involved shootings, which will examine the cause and circumstances of Taylor’s death before a six-member jury. Those speaking in Taylor’s defense have argued that the inquest should examine the entire series of events that lead to Taylor’s death, including whether or not he received aid.

What should have happened here? When an officer shoots someone, the assumption is they perceived a threat. But what’s next? It’s a question that’s been asked before. When officers shot 14-year-old Tamir Rice in Cleveland, the four minutes that elapsed before he received aid sparked outrage, as did the shooting death of Philando Castile in Minnesota, which was broadcast on Facebook live, and Michael Brown, whose body lay in the street for hours after he was shot by Ferguson, Missouri, police officer Darren Wilson.

But police departments give officers a lot of leeway in the face of potential threats. The Seattle Police Department manual calls for officers to offer “reasonable aid to those affected by a use-of- force,” but leaves the definition of “reasonable” hazy.

Sergeant Sean Whitcomb from the Seattle Police Department wouldn’t comment on the Taylor video directly, referring instead to the Force Investigations Team findings. He did say that all Seattle police officers are trained in first aid, including CPR and the use of a tourniquet.

But, Whitcomb said, “Ultimately safety’s paramount, and if deadly force was used, that would imply there’s a question in regards to safety. Once those immediate issues are resolved, then of course providing medical care, summoning medical care, and administering care are important.”

It is standard practice for officers to secure a scene before administering medical aid, but with Taylor, some see a secure scene within the first couple minutes, and especially once he’s handcuffed. “The video to me is deeply troubling,” said attorney James Bible, who is representing Taylor's family at the inquest. “It shows to me that a human was handcuffed after he was shot several times, and after handcuffing there were 5-6 minutes with no attempt to help him.”

When asked if he felt the officers were under credible threat, he answered no. “I understand what their policy says, but if you test policy based on what we see in the video, there’s no concern for safety. He’s been shot six times and handcuffed.”

Kevin Stuckey, president of the Seattle Police Officers Guild, did not respond to a request for comment.

King County Sheriff John Urquhart declined to draw any conclusions about the Taylor video, but said in a brief interview, “There are certain expectations that [officers] take some action before an aid car gets there.”

Urquhart said his office has begun to provide “care under fire kits” to officers, which contain tourniquets, bandages and occlusive dressings that seal gaping wounds. But the practice is relatively new and the kits are not widely distributed yet.

For former Seattle Police Chief Norm Stamper, who also declined to speak about the Taylor video directly, the specter of threat is indicative of a broader issue. “The whole thing is predicated on the notion that when you think you’ve stopped a threat, you may not have done that,” he said, citing examples of suspects “baiting” officers into letting down their guards.

But, he says, those “scare tactics” can sometimes be overemphasized in police training.

“My attitude is, if you’ve shot someone, they’re down, not moving and you have cover at the scene, then I think it’s perfectly reasonable to do [a medical] assessment,” Stamper said. “You can tell when you’re handcuffing them if someone’s resisting. You can probably tell if someone’s a threat.

“It’s at that point first aid should be rendered," Stamper said. "You’re going from taking a life to saving a life.”

An earlier version of this article stated that the "care under fire kits" are distributed by the state run police academy. That is not the case. Sheriff Urquhart was in fact referring to kits distributed by the King County Sheriff's Office. Crosscut regrets the error.

Join Crosscut on Jan. 17 at 6:30 p.m. to talk about police brutality, racial bias and its impact in the Seattle community. You can register for the panel discussion here.