How former Seahawk Ricardo Lockette got religion on science 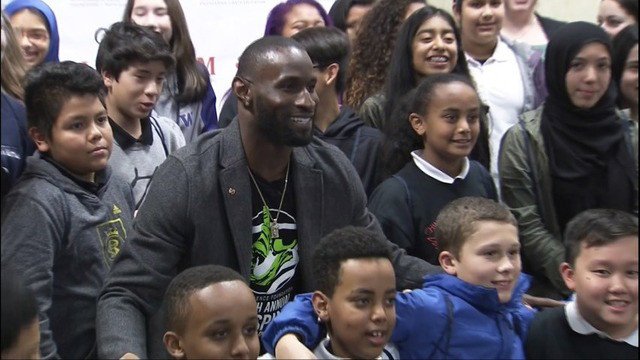 Lockette, a former wide receiver for the Seattle Seahawks, talked about the importance of perseverance and his road to recovery from the injury that ended his football career last season — a recovery, he said, that was only made possible because of STEM.

The Summit, organized by the nonprofit Washington STEM and held at the Microsoft Conference Center in Redmond, brought together more than 375 educators, policy wonks and elected officials to talk about the best practices for “equitable access to STEM education.” It was a call-to-action to close Washington's notorious education gap as STEM education legislation heads into the next critical legislative session.

Ross Reynolds of KUOW hosted a conversation with state Sen. Christine Rolfes about what to expect out of the impending session. Gov. Jay Inslee spoke about his own goals for this legislative session, which included dedicating Dec. 5-9, 2016 "Computer Science Week."

Recalling his time as an undrafted free agent, he said, “No one really knew who I was." But when the Seahawks brought him in for a one-day trial, he told Coach Pete Carroll, “I’m going to work harder than anyone you’ve ever seen.” That dedication carried him all the way to a 2014 Super Bowl Championship.

Disaster struck, however, on November 1, 2015 when Lockette was hit during a game against the Dallas Cowboys and suffered a paralyzing neck injury. Lockette recalls having his whole body go numb and not being able to speak or move.

The ligaments and cartilage that connected his vertebrae had been severely damaged, and the injury ended up requiring surgery and intense rehab. If it weren’t for the EMTs and the many medical professionals who helped him along the way, he could’ve easily ended up in a wheelchair. “I have two metal plates in my neck as we speak," he told the crowd, "and if that isn’t engineering, then I don’t know what is.”

“In school, science was one of my favorite subjects,” Lockette said. “If we put this wire here, I hope it doesn’t blow up, but we’re gonna see what happens,” he recalled with a laugh while reenacting his engineering-based classes in school.

“There’s nothing in life that doesn’t involve STEM,” he said. “There’s more opportunities in STEM fields than any other field, so what are you going to do with this opportunity?”

Toward the end of the speech, a few wide-eyed students from Chinook Middle School in Highline came up to the stage to ask Lockette some questions. One asked what STEM and football have in common. “A lot,” Lockette replied. “We have so many doctors behind the scenes. I want to say that the Seattle Seahawks use more STEM-related technology than any other team.”

Another student asked Lockette what sorts of features he would add to a football helmet if he could design one. “First of all, it would be a lot lighter so I could run a lot faster,” he said. He added that he would make the outside of the helmet a little more flexible in order to better cushion impacts.

In addition to his speaking, Lockette is a Goodwill ambassador for the nonprofit Seattle Science Foundation, which is conducting cutting edge research on spinal cord injuries. Researchers there are in the process of producing the first 3D atlas of the human spinal cord. “We’re going to break it down to centimeters,” Lockette said. “What makes your pinky move? What makes your left toe move?”

“STEM is an opportunity to change kids’ lives,” Lockette said during his closing remarks. “If you don’t do it, who will?”