They railed against environmental regs. Now they’ll lead the EPA. 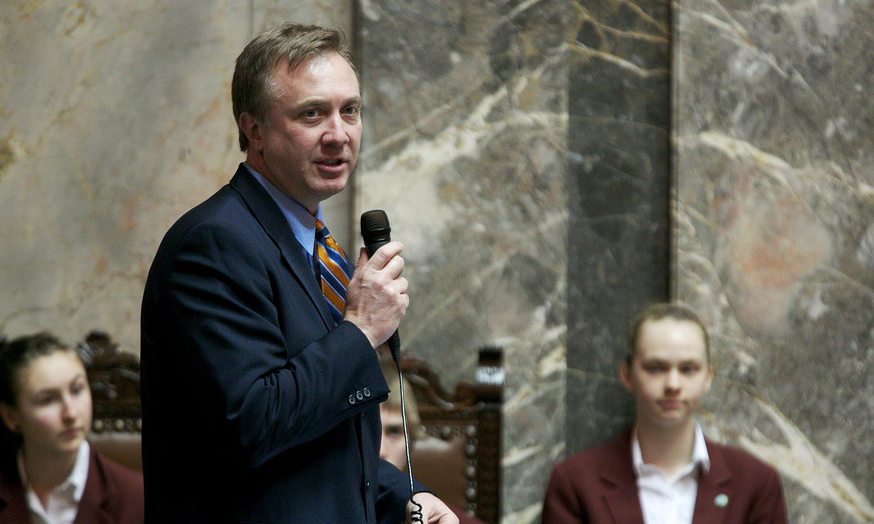 To fill temporary positions with the Environmental Protection Agency, the Trump administration is appointing two state legislators known for resisting environmental regulations and supporting corporate efforts to expand fossil fuel exports, according to a report in the Seattle Times. One, Sen. Doug Ericksen, currently represents the 42nd district; the other, former Sen. Don Benton, represented the 17th district until this year.

Neither Benton nor Ericksen could be reached for comment late Monday.

Both Ericksen and Benton have been tapped to be part of a “beach-head” team at the agency, charged with supervising the transition of lower-level officials into the rest of the agency, and overseeing the implementation of major policy shifts dictated by the administration, according to both the Times and an earlier report in the Washington, D.C.-based Energy and Environment News. Benton will serve as the senior White House advisor on the team, effectively its chief, while Ericksen will serve as communications director for the team.

Both the roles are temporary, and focused on transitioning the agency, but either could lead to a permanent position within the agency. Ericksen indicated to the Times that he’d be interested in being head of EPA region 10, which oversees Washington, Oregon, Idaho and Alaska, as well as 271 Native American tribes.

The moves are already worrying some Washington environmentalists. Shannon Murphy, head of the Washington Conservation Voters, said Monday she was disappointed by the picks, which amounted to putting two opponents of the agency in top positions.

"Sen. Ericksen’s and Benton’s environmental records speak for themselves,” Murphy said. “They are both climate deniers who have consistently voted against protecting clean air and water for communities across the state.”

Ericksen currently chairs the state Senate’s Energy, Environment and Telecommunications Committee. According to the environmentally oriented Sightline Institute, Ericksen is the Legislature’s third-largest recipient of political contributions from fossil fuel companies. He has also made a name for himself as one of the Legislature’s farthest-right conservatives with proposals like a bill he pre-filed in November to criminalize some forms of protest and allow felony prosecution of people involved in protests that block commerce, and a constitutional amendment to remove school funding mandates from the state’s founding document. Last year, Ericksen was one of the legislature’s most ardent opponents of allowing transgender people access to the bathrooms matching their gender identity.

While Ericksen did sponsor a proposal for a greenhouse gas reduction credit for businesses in 2015, in 2016 he also introduced a bill aimed at blocking any carbon limits in the state. Crucially, in voting for the 2015 bill, Ericksen also introduced an amendment altering a reference to humans as the definite cause of climate change. He has also been a vocal critic of Gov. Jay Inslee's proposals to reduce carbon pollution, such as capping carbon emissions and requiring cleaner fuels.

Both Ericksen and Benton also voted in favor of a 2013 bill authorizing a work group to analyze the effects of climate change in the state — but again, Ericksen also pushed for an amendment significantly weakening the bill’s language.

Ericksen also supported the Gateway Pacific Terminal, a project to build coal terminal out of Cherry Point in Bellingham. In May, the Army Corps of Engineers rejected permits for the facility because the project would interfere with the treaty-protected fishing rights of the Lummi tribe.

In 2013, Benton was appointed to head the Clark County Department of Environmental services, despite having no experience in environmental work. (Prior to his political career, Benton had primarily worked as an advertising consultant.) In an editorial criticizing the move at the time, the Times noted Benton had worked up to that point to limit land-use regulation, and to block inclusion of light rail in a proposed Columbia River bridge project.

Appointing Benton to head an environmental agency, the Times’ editorial board wrote, was “like using a paper shredder to edit a document.”

Benton also was known during his time in the state Senate for his willingness to venture into political theorizing that verged on the downright strange: The same year he was appointed to head the Clark County agency, he also introduced legislation that at first blush appeared based on the Agenda 21 conspiracy theory, which equates a non-binding UN sustainability plan from 1993 with plots for world domination. The theory was popularized by some in the Tea Party movement.

While the specifics of the appointments are new to many, the prospect that Ericksen and Benton would likely find a place in the incoming administration has been a familiar one. Ericksen, Benton and Sen. Brian Dansel, R-Republic, were all early supporters of Trump, and contributed substantial time to his campaign efforts, leading many in Olympia to expect appointments for some or all of them.