Tools for the Trump resistance 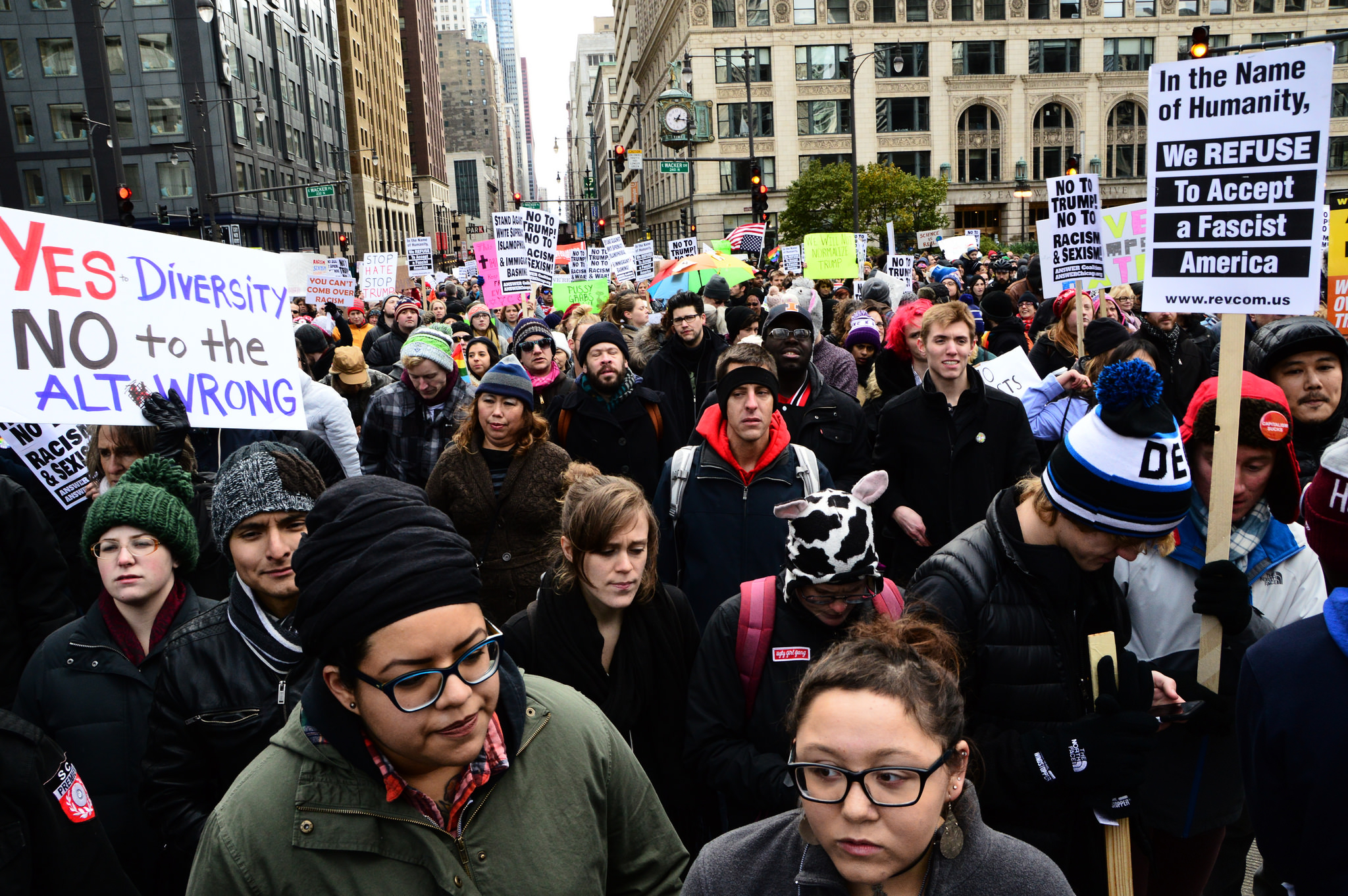 A Chicago protest in November

On Inauguration Day, the sun will rise and set even for #NeverTrump residents of the Northwest. Hopefully. And sometime Saturday, workers at Seattle’s Second Avenue federal building will remove and archive portraits of President Barack Obama and Vice President Joe Biden. Apply for a travel visa or stop for a visit at the offices of Sen. Patty Murray or Maria Cantwell, and you will be greeted by the beaming mugs of Donald J. Trump and Mike Pence.

Many people are saying it will be great.

In the Puget Sound area and urban parts of the Northwest, however, Trump anxiety transcends partisan politics. For many, conservative New York Times columnist David Brooks’ judgment that the American people just “crowned a fool king” will resonate.

In Washington, both Republican U.S. Senate candidate Chris Vance and gubernatorial nominee Bill Bryant distanced themselves from Trump and his racist babble. Vance has continued to do so, while Democrats pledge to resist the policies Trump espoused with impulsive rhetoric on the campaign trail.

“No matter what happens in that Washington, here in this Washington, we will not forget who we are,” Gov. Jay Inslee said in his State of the State address. It’s a refrain that will find its way into Democratic talking points from Everett to Yakima.

To compound the unreality of a Trump presidency, Republicans are freighted with a national agenda that weathervanes, requiring the political class to pretzel like contortionists. Do Republicans embrace free trade or are they protectionists? Do childhood vaccines trigger autism and is climate change a lefty myth? Are Germany and NATO the bad guys and the Russians our pals?

The Alice in Wonderland reversal in American foreign policy is especially chilling. As human rights leader and former chess champion Garry Kasparov wrote in a Jan. 15 tweet, “I'm still waiting for Trump to say something about global affairs that hasn't literally been said first by the Kremlin.”

So what’s the best tool for Trump resisters? Satire is one strategy — an approach that clearly enrages Trump, who has tweeted more about Alec Baldwin and “Saturday Night Live” than universal human rights.

“I am not sure sophisticated satire or wit can do anything besides amuse people who already agree with it in the first place,” says Bill Oakley of Portland, an Emmy-winning former producer and writer for “The Simpsons.”

“However, ruthless mocking in a very simplified form can indeed work wonders as was proven throughout history,” Oakley says. “Witness the story of Boss Tweed [a corrupt 19th century politician] who didn't care at all about newspaper editorials but was infuriated to no end by ‘those damn pictures’ drawn by cartoonist Thomas Nast.” He points out that Tweed was eventually arrested overseas because someone recognized him from a Nast cartoon.

Oakley already has a head start, lampooning Trump’s nominee for education secretary in a recent tweet: “ ‘How can you have a school without a gun? What if a bear came through the door?’ ” – Betsy DeVos is channeling Grampa Simpson.”

If only Trump, who plans to put the kibosh on arts funding, felt threatened by poetry.

From Suffragists (Washington women got the vote a decade before the passage of the 19th Amendment) to abolishing the death penalty (it happened first in 1913), Washingtonians know how to agitate for change. (As Knute Berger writes, however, Northwesterners also have flirted with fascism. It’s a legacy expressed in the militia movement and other extremist offshoots, documented by David Neiwert in his books “In God’s Country” and “Hell Followed with Her.”)

Washingtonians have multiple options to express resistance, from Inauguration Day protests to Saturday’s Womxn’s march, which is expected to draw 50,000 protestors.

Over the long term, volunteers can become active or contribute to the Washington ACLU, the Northwest Immigrant Rights Project, or local organizations inspired by the “indivisibles” campaign to challenge the Trump agenda. Nonpartisans can support impartial worker rights or human rights scholarships at the University of Washington’s Harry Bridges Center for Labor Studies or the Center for Human Rights (disclosure: I serve on its advisory board).

Ultimately, what may sink a Trump administration is impunity, just as when Eliot Ness targeted Al Capone’s taxes. Americans will soon learn more than they ever wanted to know about the Emoluments Clause of the Constitution and the previously obscure Logan Act on private citizens staying out of foreign affairs, which members of the incoming administration may have violated multiple times.

This is the acid test of a republic: Are we a nation of laws or will we allow impunity to erode America’s democratic institutions?

“If anyone in the audience is asking what can I do, I say that we are going back to the 1960s, the American people need to get off the couch and organize, push back, press Congress, no matter if the issue is immigration, civil rights or anything else,” said former U.S. Rep. Jim McDermott at a Jan. 17 UW lecture. “You have to be willing to go beyond the easy stuff, and get out there.”

So jettison the easy stuff. No amount of craft beer, hand-wringing, or righteous Facebook posts can unmake what’s been made. Resisting Trump, the consummate bully and narcissist, will take time and sweat equity.