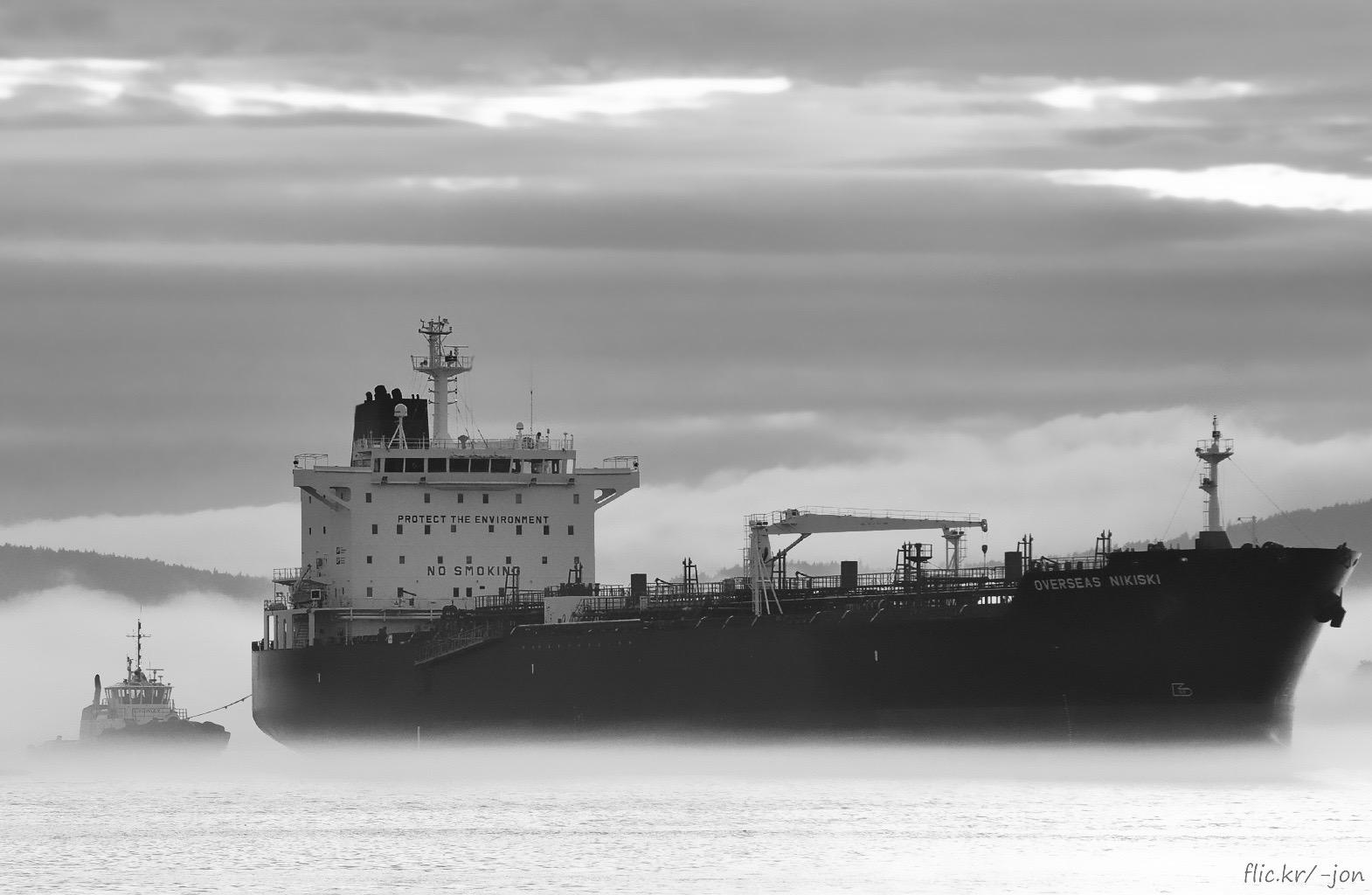 On October 13, 2016 a 95-foot-long tug ran aground off the coast of Bella Bella, British Columbia, spilling an estimated 100,000 gallons of diesel fuel. The fuel swept into the waters where the Heiltsuk First Nation harvests shellfish, giving members of the tribe front-row seats to the circus that unfolded as spill-response teams tried to clean up the mess.

Heiltsuk leaders witnessed an emergency response that “was disastrously slow, deployed too few boats, had inappropriate equipment [and] untrained crews,” Stephen Hume wrote in the Vancouver Sun. One of the response ships taking on water and beginning to sink itself.

Efforts by the oil industry, along with provincial and federal governments, to contain the spill “essentially failed,” Hume wrote.

The risk of major spills in the Salish Sea could soon increase dramatically, by as much as 168 percent, thanks to the possible sevenfold rise in oil tanker traffic associated with Kinder Morgan’s Trans-Mountain Pipeline expansion. Canadian Prime Minister Justin Trudeau approved the pipeline in late November. The B.C. government gave it the green light last week.

Many people, including U.S. Sen. Maria Cantwell of Washington, have pointed to the Bella Bella debacle as case study in Canada’s spill-response deficiencies, calling on the country to reconsider its decision on the Trans-Mountain project, or at least make some serious upgrades before allowing the pipeline expansion to proceed. 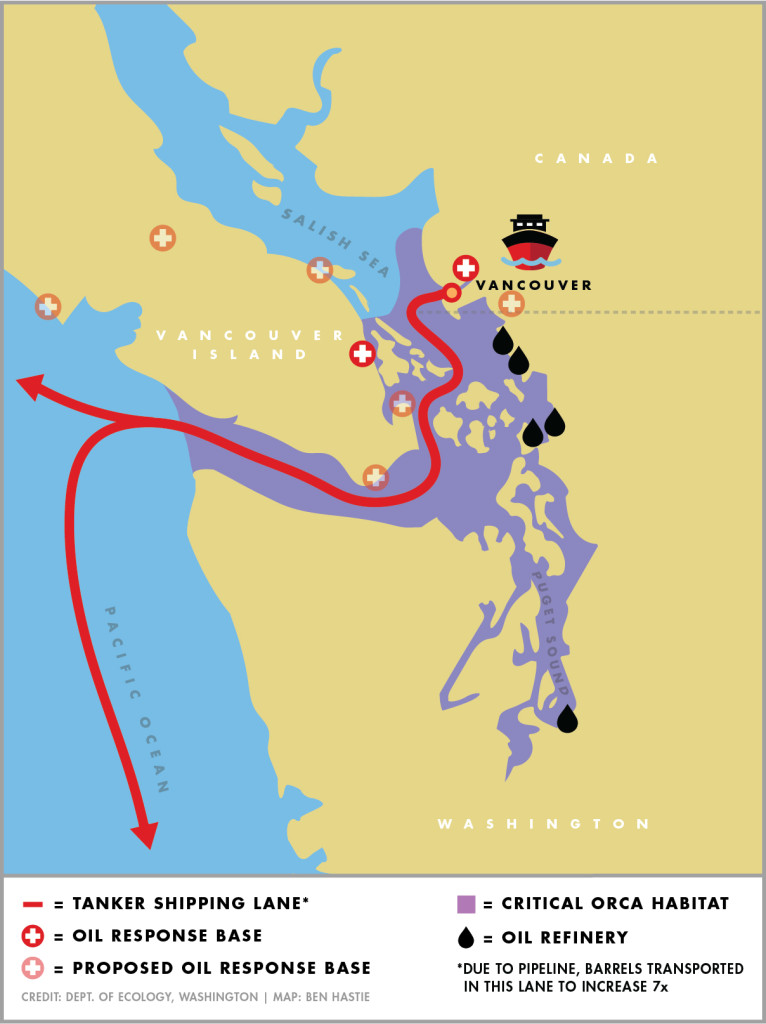 But this isn’t just about Canada’s ocean: These new ships carrying oil from the pipeline would travel through transboundary areas that include both U.S. and Canadian waters, on the border of British Columbia and Washington. Canada’s ability to effectively deal with an oil spill could also potentially affect the marine life and resources on our side of the border. What’s more, responding to spills that occur in border areas requires coordination between two countries with different regulations, agencies and political structure, making the process more complex and possibly even harder to effectively carry out.

“When a significant spill occurs in a transboundary area, the number of stakeholders is at least doubled; consequently, the potential for miscommunication and conflict — as well as public scrutiny — also escalates,” says a 2011 report from the Pacific States/British Columbia Oil Spill Task Force, a group made up of officials from six costal states and provinces.

In both the U.S. and Canada, oil-carrying vessels must have a contingency plan for how to deal with spills. That can include contracting with oil-spill cleanup companies such as the Marine Spill Response Corporation or the National Response Corporation. Additionally, there are several different agencies and organizations involved in marine oil-spill response on the U.S. side alone, including the U.S. Coast Guard and Washington’s Department of Ecology.

When it comes to transboundary areas, as each country brings its own agencies and protocols, that number multiples — which can also mean there’s no one clear lead for taking responsibility.

“In the transboundary there’s no one entity tackling all the risk and coordination,” says Sarah Brace, executive coordinator of the Oil Spill Task Force. Part of her role is to facilitate collaboration and coordination between the different groups involved. Some of the current transboundary efforts include the marine pollution contingency plan shared between the U.S. and Canadian coast guards, as well as every-other-year transboundary spill-response exercises.

These are not hypothetical scenarios: Oil spills have bled across political boundaries before. When the Nestucca collided with its own tug near Grays Harbor in 1988, the resulting spill of 231,000 gallons of heavy fuel oil fouled beaches from Oregon to Canada’s Vancouver Island. That disaster, in fact, prompted the creation of the Oil Spill Task Force that Brace now leads. (The original task force included Washington and B.C. Alaska, Oregon and California joined after the Exxon Valdez disaster, which occurred less than a year after the Nestucca spill.)

In the time since, the task force has helped beef up the oil-spill responses across the U.S. and Canada, including providing recommendations for the 1993 Canadian Shipping Act Amendments, which laid down new rules for Canadian marine transport. But there’s still a lot of work to do: The previously mentioned 2011 report made 135 recommendations for improvement to a variety of organizations involved with oil spill preparedness in both the Canada-Washington and Canada-Alaska transboundary areas.

Brace says the task force is in the process of evaluating progress on all of the report’s recommendations, and that a follow-up report is scheduled to come out later this winter.

The recommendations are all the more relevant now that about 350 tankers the length of two-and-a-half football fields could soon be traveling through Salish Sea transboundary waters each year.

Even more concerning to conservationists is what those tankers will be carrying: Kinder Morgan says the enlarged pipeline could carry as much as 890,000 barrels a day of diluted bitumen, known in the industry as "dilbit."

“The critical thing to keep in mind is that we’re not talking about conventional oil being carried,” says Fred Felleman, a Seattle Port Commissioner, and consultant for environmental organization Friends of the Earth.

Dilbit is crude oil that is diluted so that it can flow through pipes. It has become more and more prevalent over the past few years nationwide, even though the industry has not figured out how to address the particular challenges of cleaning it up. Oil-spill response depends on capturing floating oil, but dilbit is heavier than conventional oil and so has a tendency to sink before cleanup crews arrive on the scene.

Meanwhile, U.S. officials are pointing fingers at Canada for lagging behind. “One of the things we have now believed for a long time, and why we keep pushing on it, is that Canada does not have the same prepared planning and response capability that we have here on the U.S. side,” says Dale Jensen, program manager of the Spills Program within Washington Ecology. “We’ve encouraged them to invest in stronger planning, like geographic response planning that has very specific strategies on how to respond to spills.”

Canada has made promises to beef up its spill response as part of Kinder Morgan’s plans for expansion, with five new oil-spill response bases on Vancouver Island that would mean having more equipment and people on hand should disaster strike. Kinder Morgan is one of the primary investors.

The question is, will that be enough?

“It’s not until we see the full implementation that we recognize they’ve met the standards we’ve challenged them on,” Jensen says. “We want the highest standard of prevention and response. It’s trying to get that mindset in our shared Salish Sea.”