WA: More conservative, and more divided, than you think 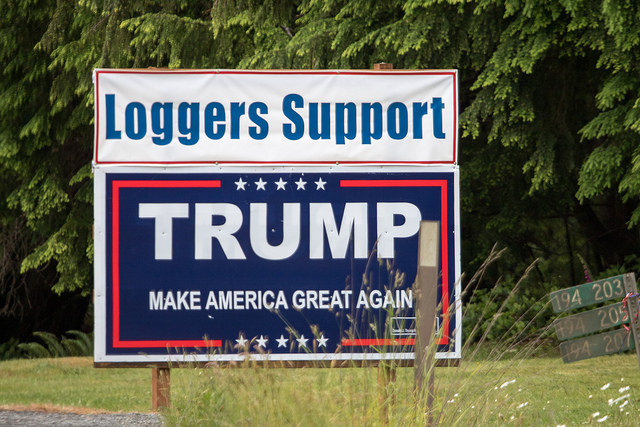 A sign in Forks, Washington. In 2016, Grays Harbor County, south of Forks, tipped to the Republican presidential candidate for the first time in memory.

In a year when election outcomes shocked many people in the polling industry into self-reflection, Seattle pollster Stuart Elway came out feeling pretty good. Elway, who has been watching political attitudes in the state of Washington for the last 25 years, is one of only a handful of pollsters to be rated “A+” by Nate Silver, which he ought to put on his business card or tattoo on his knuckles.

As we get used to saying, “President Trump,” what does Elway observe about the state of Washington state’s electorate? Here’s what I was able to glean from a recent Elway talk and the results of his most recent data, including a new report released this month.

Some of it won’t surprise you: We’re easily divided on the map into Blue (west) and Red (east) chunks. We lean way Democratic in presidential and statewide elections, a trend that shows no signs of abating. Hillary Clinton won the state, no surprise, and the top Democrat performer down the ballot was liberal Sen. Patty Murray.

Elway says with a smile that the GOP “doubled” the number of statewide offices it holds — from one, Secretary of State, to two, with State Treasurer, thanks to the Democrats splitting their vote in the top-two primary. But the Democrats’ firm grip on state offices has done nothing but strengthen over the years. In 1988, Republicans held 60 percent of statewide offices he says. Since 1992, the Dems have won 77 percent.

With the population growth in central Puget Sound, it has never been more true that you can see all the votes you need to win the state from the top of the Space Needle. Fifty-four percent of the electorate lives in Pierce, King and Snohomish counties and they lean blue.

But Elway’s polling of attitudes and political identifications reveal a state more divided — some might say balanced — than it appears. Seattle bubble people, take note.

Consider, for example, that more Washingtonians identify as “conservative” than “liberal” (43 percent vs. 40 percent), though Elway thinks that might partly be because of the denigration of the term “liberal” over the years (many liberals prefer to be called “progressives”). Fifty-six percent say they are fiscally conservative, 63 percent said the government controls too much of our daily lives.

In a state that is one of the most trade-dependent in the nation, 49 percent say we should be strong and active in international affairs, but a plurality, 29 percent, are what Elway calls “isolationists,” meaning they favor protectionism and to let the foreigners fend for themselves.

Elway notes there’s been a definite shift away from support for free trade. In 2006, 50 percent of Washingtonians favored a protectionist trade policy; in 2015 that grew to 63 percent. Elway says that in 2016, Gray’s Harbor County, which for the first time in memory swung from solidly Democratic to Red for Trump, was “our Michigan.” Trump’s tough talk on trade likely perks up ears.

Olympia remains divided, but Washingtonians are united on one thing: Olympia generally sucks, or at least the politicians do, even though we keep mostly reelecting incumbents. Numbers tell the story. In 1995, 70 percent of Washingtonians said state government represented them pretty well. By 2015, that number was down to 44 percent — same as Gov. Jay Inslee’s current approval rating.

Gridlock in the legislature is part of it, with both liberals and conservatives frustrated for different reasons. Elway says “Democrats want to change Republican obstruction. Republicans want to change Democrat profligacy.”

Interestingly, state voters seem gridlocked on the same issue as Olympia: education. A plurality, 45 percent, say it is the No. 1 issue facing the state, according to Elway’s latest polling released this month. That’s up from 11 percent in 2011, pre-McCleary.

When asked how they would solve the funding crisis, a majority, 56 percent, picked the option to fund education first, and cut programs if necessary, which is essentially the GOP position, and that’s up from the low 50s in 2016 and 2015. In other words, fund-first appears to have growing appeal with voters, that is, until you start specifying what to cut.

It should be noted that nearly half — 47 percent — of voters would agree to either raise taxes to pay for education to avoid cuts, or would consider not fully funding education with no new taxes and no service cuts. So while fund-first polls higher, voters are open to other options.

Another interesting trend that might explain the split minds many Washingtonians have is the rise of what Elway called “libertarians.” These are not necessarily folk who vote for the Libertarian party and worship Ayn Rand and revere Rand Paul. There has long been a strain in what Elway calls “our Washington chowder” that blends social progressiveness (on pot, same sex marriage) with fiscal restraint. Going back to the early 20th century, Seattle’s Chamber of Commerce used to be pro-business and pro-vice, a frontier boomtown mindset.

Elway has a rough way of identifying these voters, asking people if they think government has too much influence in their lives, and if they think the government should guarantee food and shelter for the people. The libertarian strain answers yes to the first question and no to the second. That group has increased from 28 percent in 2006 to 35 percent in 2015.

That pattern has not shown up in areas that attract urban high-tech workers, like South Lake Union, though libertarianism has been a feature of the tech scene (see Amazon and Microsoft). It might reflect younger voters in fiscally tough times, or older strains of independence. Washington voters are notoriously not party loyalists (note the faithless electors) and not particularly motivated by religion — the Northwest is famously unchurched.

Over all, Washingtonians seem to support the status quo: Democrats run the state, GOP checks them in the Legislature, and the people get to decide on initiatives when it comes to big statewide issues (pot yes, taxes no). The dynamic, short of a major revolt, could change after 2020 when legislative district boundaries are redrawn.

Washington enters the Trump era with a distinctive taste to its political “chowder,” a recipe that’s adding new ingredients, but as Elway notes, the flavor is still largely familiar.