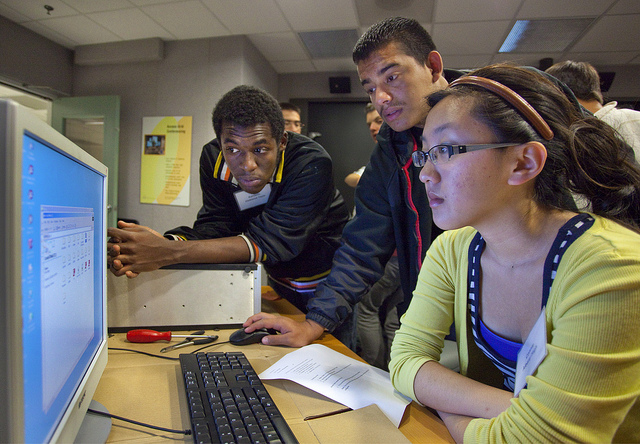 Here’s something to wrap your brain around: Washington state, one of the nation’s foremost tech hubs, has historically only offered computer science as an elective in public schools — if it’s offered at all. Currently, only one in 10 schools in the state offers courses that teach kids advanced computer science skills.

The tides may be turning, however. Attention to computer science education has increased lately, due in part to the overwhelming skills gap between Washington’s university graduates and available jobs in the tech industry. Lawmakers are realizing that, in order to remedy this problem, schools need to give all kids an equal shot at learning STEM (science, technology, engineering and math) skills.

Governor Jay Inslee has said that he wants to see computer science courses in every public school in the state in the next four years. Outgoing State Superintendent of Public Instruction Randy Dorn adopted Washington’s first official standards for implementing computer science curricula in December. The standards are based on a national framework meant to establish a baseline literacy in computer science education, although the specifics of how it plays out will vary from district to district.

The trouble may be finding teachers who are willing and able to teach it.

The Bellevue School District is currently working with preliminary versions of the new standards. Educators there are in the process of integrating computer science into the school day as a core skill, and eventually as a graduation requirement just like math or English. “We’re developing a pathway that starts at kindergarten, maybe even preschool,” says Greg Bianchi, STEM developer for the Bellevue School District.

What kind of computer science would a kindergartener be learning, you ask? Although today’s kindergarteners seem to be much handier with an iPhone than most adults will ever be, the curricula at the earliest stages would not involve any sort of technology. Instead, kids would learn a type of thinking that’s crucial for later grade levels that would actually involve a computer. For example, they could create simple algorithms about everyday occurrences in their lives, or create sequences with toy blocks as a precursor to writing code.

In Grace Waylen’s fifth-grade class at Somerset Elementary School in Bellevue, students are designing games using a variable. The curriculum is implemented electronically with step-by-step instructions, and kids work both in pairs and independently. “Right now, they’re modelling matter in science,” Waylen says. “They’re putting together programs to show what happens when they mix two liquids.”

With regard to the upper levels, high school juniors and seniors would learn everything from basic programming to higher-level programming languages and robotics. “The levels would build off of each other,” says Shannon Thissen, computer science program specialist at the Office of the Superintendent of Public Instruction (OSPI).

The goal of the new computer science standards isn’t to get every student to be a traditional software developer, but rather to give them the tools they’ll need in a tech-dependent world, regardless of what kind of career they choose. To do that, the new computer science curricula will need to assimilate with various subjects, including math or social studies.

Of course, the endeavor will encounter some difficulties along the way. The first of those may be finding teachers, when people with computer science skills can make a lot more money in private industry than they ever could in the public schools.

Luckily there are those, like Waylen, who are willing to learn. Last summer, she took a course on computational thinking and trained in an interactive program called Scratch that lets students in the classroom program their own games and animations. Around 150 Bellevue K-5 teachers have partnered with code.org in a pilot program that brings the fundamentals of computer science to the classroom.

Thissen cites reaching rural school districts, tribal schools and minority students as some of OSPI’s biggest challenges. “OSPI has a lot of supporting organizations out there,” she says, with regard to implementing the standards in low-income schools. “But we’ll need to work on increasing those.”

Partnerships with companies such as Microsoft and Expedia, and the nonprofits like Washington STEM, have also helped build a community of support around computer science education.

Waylen says her students have already had some breakthrough moments with their computer science skills. “There are two students with disabilities in my class and it’s been fun to watch them be successful and participate alongside their gen-ed peers,” she says. “There’s an inclusivity that they feel.”

“All students will need computer science in their careers and daily lives,” Bianchi says. “Not having these basic skills will put them at a tremendous disadvantage for their futures.”