Washington will take a swing at Trump's order 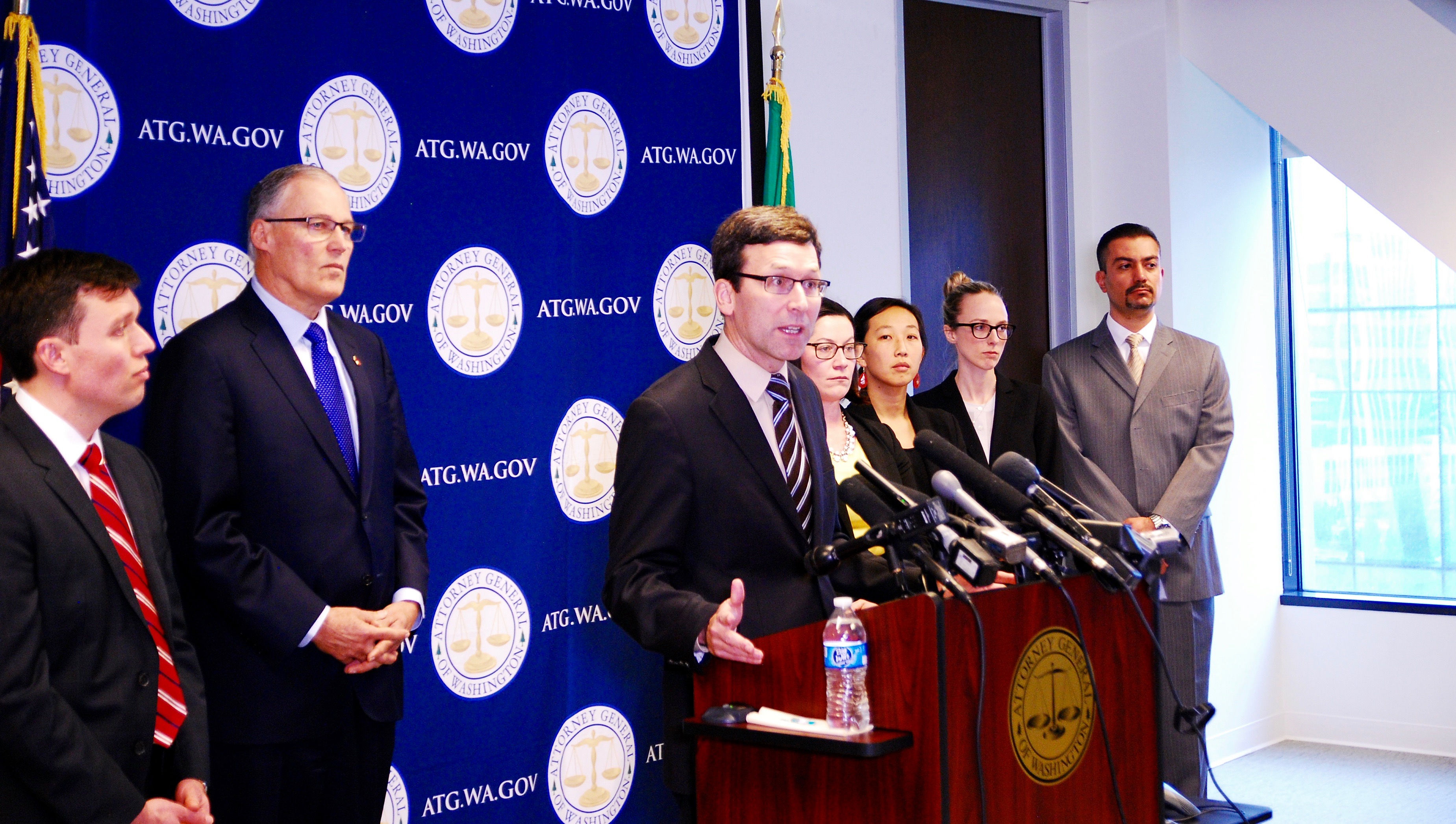 Attorney General Bob Ferguson, with Jay Inslee over his right shoulder, announces a lawsuit to block the presidential order aimed at Muslim immigrants.

The state’s lawsuit, which Ferguson and Gov. Jay Inslee announced at a Monday press conference in Seattle, is the first of its kind in the nation. The suit specifically targets the nationality-based prohibition on immigrants and the religious test, asking federal judges to invalidate entire sections of the executive order.

Inslee had earlier hinted about the possibility of legal intervention, but he has been vague about whether there are any other specific actions he or the state might take on behalf of immigrants.

The papers from the suit were not immediately made available. But, in a press statement, Ferguson said the state will assert that the presidential actions are “separating Washington families, harming thousands of Washington residents, damaging Washington’s economy, hurting Washington-based companies, and undermining Washington’s sovereign interest in remaining a welcoming place for immigrants and refugees.” He also said that a number of institutions in the state, as well as Expedia and Amazon, are being harmed.

Those questions could be critical, because the federal government will likely assert that the state of Washington has no interest in whether refugees are admitted.

Using broader language than a Saturday ruling in federal court that blocked enforcement of Trump’s order, the suit asks a federal judge to declare whole sections of the order permanently void.

Speaking Monday, Inslee criticized the order as un-American. “Its intent is to open the gates to Christian refugees, and to slam shut the gates to refugees who embrace the faith of Islam,” Inslee said.

Trump’s order, which banned residents of seven Muslim-majority nations in the Middle East from entering the United States, has already fallen into the sights of the federal courts. A federal judge here blocked the removal of arriving passengers covered by Trump’s executive order. And a judge in a Brooklyn federal district court Saturday issued a temporary injunction immediately prohibiting federal immigration authorities from carrying out the order nationwide.

In that ruling, Judge Ann Donnelly noted the “strong likelihood” that the order violated the constitutional rights of green card holders and refugees to due process and equal treatment.

The state lawsuit announced Monday aims to solidify that temporary block, by having entire sections of the executive order declared unconstitutional and thus permanently void.

Trump’s order is ostensibly at least partly temporary: People from seven predominantly Muslim countries faced a 90-day block, while refugees from all areas are blocked for 120 days. But refugees from the civil war in Syria, which has caused nearly 5 million to flee, are banned permanently under the order.

While the Monday suit puts the state at the front of national resistance to Trump’s order, it’s less clear how the state will react to the plight of individual citizens within its borders who find themselves affected by not only the Trump order but rising anti-immigrant rhetoric, not to mention other potential executive orders.

Won Kidane, an associate professor at the Seattle University School of Law who teaches immigration law, said that with the lawsuit, Inslee and Ferguson are already taking one of the most dramatic steps available to them. But, Kidane added, they might be able to do more.

Doing something like setting up a legal help hotline for immigrants or refugees would probably be within the power of the attorney general, Kidane said.

More generally, the state government also has the power to direct resources — for example to municipalities that find themselves suddenly targeted by punitive federal funding cuts — which is how the Trump administration has said it will target cities that try to shield immigrants.

That kind of specific action, though, is something Inslee has been vague about so far. In a press conference the week before announcing the lawsuit, Inslee talked about resisting Trump’s policies not only on immigration, and urging people to “speak up,” but said he wanted to leave decisions about policing — specifically the involvement of local police in immigration enforcement — up to local authorities.

When a reporter last week asked what, specifically, the governor would do for people in places like refugee-rich South Seattle if speaking up by itself proved ineffective, Inslee repeated that his first step was going to be to urge his constituents to “speak up,” and lobby “the better angels of the members of Congress.”

Clearly, that remark foreshadowed Monday’s announcement of the state lawsuit. Just as clearly, it also leaves Inslee well shy of a commitment to go out on a political limb to help individual Washingtonians with programs or initiatives that could be much costlier than a lawsuit.